Germans in the United Kingdom

Germans have been coming to live in the United Kingdom for hundreds of years. Today, there are many Germans living in the United Kingdom, and many Britons or German British (German: Deutsch-Briten) have German ancestry, including the British royal family. While those born in Germany constitute one of the UK's largest foreign-born groups, many are British nationals, rather than German nationals, who were born in Germany to British military personnel based there.

Germans have resided in the United Kingdom throughout its history. The Anglo-Saxons were partly from what is now Germany, and created the notion of England as a Germanic country. Likewise, the English language was descended from their dialects. The Anglo-Saxons arrived in what later became England from the 440s. Examples include the Hanseatic merchants of the Middle Ages and also the sixteenth-century Protestant refugees who emigrated to Britain to flee the instability caused by the religious wars following the Reformation. By the end of the seventeenth century, a significant German community had developed, consisting mostly of businessmen, mainly from Hamburg; sugar bakers and other economic migrants.

In 1709/10, thousands of Germans from the Electorate of the Palatinate, which had been invaded by French forces and suffered a severe winter, also migrated to England. Queen Anne's government had invited them, with the plan to settle Germans in the North American colonies. Some stayed in the London area. In 1714, George I, a German Hanoverian prince, ascended to the British throne, founding the British House of Hanover. Every subsequent British monarch until Edward VII in the twentieth century would take a German spouse.

The British Royal family retained the German surname Saxe-Coburg-Gotha until 1917 when, in response to the anti-German feelings of World War I, it was legally changed to the English-sounding 'Windsor'. Reigning King Edward VII famously relinquished all his titles held under the German Crown and his son, the future George V, stripped fifteen of his German relatives (mostly from the House of Hanover) of their titles. Even today, the Royal family is sometimes parodied as being 'German'.

In terms of religion, St Georges, a Lutheran Church dating from 1762/63, is the oldest German church in the UK. The congregation was founded by Dederich Beckmann, a wealthy sugar boiler and cousin of the first pastor. It served as a religious centre for generations of German immigrants who worked in the East End sugar refineries, and meat and baking trades until the First World War. During the Nazi period in Germany, St George's pastor Julius Rieger set up a relief centre for Jewish refugees from Germany, who were provided with references to travel to England. The leading theologian and anti-Nazi activist Dietrich Bonhoeffer was also associated with the work of St George’s when Bonhoeffer was pastor at the nearby St Paul’s church between 1933 and 1935.[1]

The 2001 UK Census recorded 266,136 people born in Germany, making them the fourth-largest foreign-born group after Irish, Indians and Pakistanis.[2] A large proportion of these people are thought to be the children of British military based in Germany at the time of their birth, who have since returned to the UK with their families.[3][4][5] Wiltshire, Colchester, North Yorkshire and Aldershot, which are all home to significant army populations, had a combined population of 12,000 born in Germany.[3]

The Office for National Statistics estimates that in 2013, there were 297,000 people living in the UK who had been born in Germany, but that 189,000 of these were British nationals. The total number of German nationals resident in the UK, regardless of birthplace, is estimated at 126,000 in 2013.[9]

Other than in areas with army bases, clusters of people born in Germany are found in West London, particularly around Richmond, where there is a German school.[3]

File:Haendel.jpg
Georg Friedrich Händel lived most of his adult life in England, becoming a British citizen by Act of Parliament 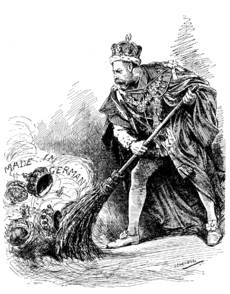 German Britons and German speakers have contributed to numerous areas in British life, especially in establishing powerful family dynasties. There are also areas and buildings named after famous Germans, such as Holbein Place in Central London, named after the Renaissance painter Hans Holbein the Younger, as well as the Herschel Museum of Astronomy, an independent museum in Bath dedicated to the life and works of the famous astronomer William Herschel, who discovered the planet Uranus in 1781.

In music, George Frideric Handel, one of the greatest composers of the Baroque era in the 17th century, was commissioned to write four anthems for the coronation ceremony of King George II. He became a subject of the British crown in 1727.

In business & commerce, Germans have also been highly successful. Backes & Strauss, the world's oldest Diamond company was founded in 1789 by German businessmen Georg Carl Backes and (later on) Max Strauss. In 1818 Johann Heinrich Schröder founded with his brother, the London-based firm Schroders, today one of the world's largest investment banks. In 1851 Paul Julius Reuter founded the Reuters news agency, now one of the large financial media organisations in the world.

Ekkehard von Kuenssberg was the founder and president of the Royal College of General Practitioners. As far as influential families go, the Freuds (present in the UK today via Lucian, Clement and Matthew) can trace their roots back to Germany and have the Freud Museum named in honour of family patriarch Sigmund. John Jacob Astor, 1st Baron Astor of Hever, founded the Astor dynasty in England. The Battenberg family's roots go back to Prince Louis of Battenberg who became a British subject, and whose immediate descendants were his youngest son Louis Mountbatten, 1st Earl Mountbatten of Burma, and his grandson Prince Philip, Duke of Edinburgh and husband of Queen Elizabeth II. 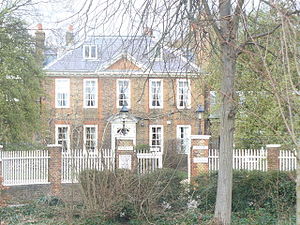