From Infogalactic: the planetary knowledge core
Jump to: navigation, search
This article is about the Reuters news agency. For the current parent company, see Thomson Reuters. For the former parent company prior to its 2008 acquisition by The Thomson Corporation, see Reuters Group.

Reuters /ˈrɔɪtərz/ is an international news agency headquartered in Canary Wharf, London, England, United Kingdom and is a division of Thomson Reuters.

Until 2008, the Reuters news agency formed part of an independent company, Reuters Group plc, which was also a provider of financial market data. Since the acquisition of Reuters Group by the Thomson Corporation in 2008, the Reuters news agency has been a part of Thomson Reuters, making up the media division. Reuters transmits news in English, French, Arabic, Spanish, German, Italian, Portuguese, Russian, Japanese, Korean, Urdu, and Chinese.

The Reuter agency was established in 1851 by Paul Julius Reuter in Britain at the London Royal Exchange. Paul Reuter worked at a book-publishing firm in Berlin and was involved in distributing radical pamphlets at the beginning of the Revolutions in 1848. These publications brought much attention to Reuter. He later developed a prototype news service in 1849 in which he used electric telegraphy and carrier pigeons. The Reuter's Telegram Company was later launched. The company initially covered commercial news, serving banks, brokerage houses, and business firms.[2]

The first newspaper client to subscribe was the London Morning Advertiser in 1858.[3] Newspaper subscriptions subsequently expanded.

Over the years Reuter's agency has built a reputation in Europe and the rest of the world as the first to report news scoops from abroad. Reuters was the first to report Abraham Lincoln's assassination, for instance. Almost every major news outlet in the world currently subscribes to Reuters. Reuters operates in more than 200 cities in 94 countries in about 20 languages.[citation needed]

The last surviving member of the Reuters family founders, Marguerite Baroness de Reuter, died at age 96 on 25 January 2009, after having suffered a series of strokes.[4]

The Reuters News Agency employees some 2,500 journalists and 600 photojournalists in about 200 locations worldwide.[5] Reuters journalists use the Reuters Handbook of Journalism[6] as a guide for fair presentation and disclosure of relevant interests, to maintain the values of integrity and freedom upon which their reputation for reliability, accuracy, speed and exclusivity relies.[6]

In May 2000, Kurt Schork, an American reporter, was killed in an ambush while on assignment in Sierra Leone. In April and August 2003, news cameramen Taras Protsyuk and Mazen Dana were killed in separate incidents by U.S. troops in Iraq. In July 2007, Namir Noor-Eldeen and Saeed Chmagh were killed when they were struck by fire from a U.S. military Apache helicopter in Baghdad.[7][8] During 2004, cameramen Adlan Khasanov in Chechnya and Dhia Najim in Iraq were also killed. In April 2008, cameraman Fadel Shana was killed in the Gaza Strip after being hit by an Israeli tank.[9]

The first Reuters journalist to be taken hostage in action was Anthony Grey. Detained by the Chinese government while covering China's Cultural Revolution in Peking in the late 1960s, it was said to be in response to the jailing of several Chinese journalists by the colonial British government of Hong Kong.[10] He was considered to be the first political hostage of the modern age and was released after being imprisoned for 27 months from 1967 to 1969. Awarded an OBE by the British Government after his release, he went on to become a best-selling historical novelist. 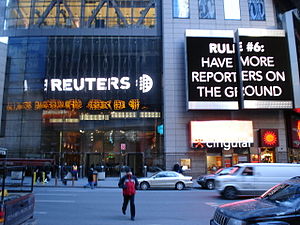 Reuters has a policy of taking a "value-neutral approach," which extends to not using the word "terrorist" in its stories, a practice which has attracted criticism following the September 11 attacks.[12] Reuters' editorial policy states: "We are committed to reporting the facts and in all situations avoid the use of emotive terms. The only exception is when we are quoting someone directly or in indirect speech."[13] (The Associated Press, by contrast, does use the term "terrorist" in reference to non-governmental organizations who carry out attacks on civilian populations.[12])

Following the September 11 attacks, Reuters global head of news Stephen Jukes reiterated the policy in an internal memo and later explained to media columnist Howard Kurtz (who criticized the policy): "We all know that one man's terrorist is another man's freedom fighter, and that Reuters upholds the principle that we do not use the word terrorist...We're trying to treat everyone on a level playing field, however tragic it's been and however awful and cataclysmic for the American people and people around the world. We're there to tell the story. We're not there to evaluate the moral case."[12]

In early October 2001, CEO Tom Glocer and editor-in-chief Geert Linnebank and Jukes later released a statement acknowledging that Jukes' memo "had caused deep offence among members of our staff, our readers, and the public at large" and wrote: "Our policy is to avoid the use of emotional terms and not make value judgments concerning the facts we attempt to report accurately and fairly. We apologize for the insensitive manner in which we characterized this policy and extend our sympathy to all those who have been effected by these tragic events."[14]

In September 2004, the New York Times reported that Reuters global managing editor, David A. Schlesinger objected to Canadian newspapers' editing of Reuters articles to insert the word terrorist. Schlesinger said: "my goal is to protect our reporters and protect our editorial integrity."[15]

In July 2013, David Fogarty, former Reuters climate change correspondent in Asia, resigned after a career of almost 20 years with the company and wrote about a "climate of fear" which resulted in "progressively, getting any climate change-themed story published got harder" following comments from then deputy editor-in-chief Paul Ingrassia that he was a "climate change sceptic." In his comments, Fogarty stated that "Some desk editors happily subbed and pushed the button. Others agonised and asked a million questions. Debate on some story ideas generated endless bureaucracy by editors frightened to take a decision, reflecting a different type of climate within Reuters—the climate of fear," and that "by mid-October, I was informed that climate change just wasn't a big story for the present. ... Very soon after that conversation I was told my climate change role was abolished."[16][17] Ingrassia, currently Reuters' managing editor, formerly worked for the Wall Street Journal and Dow Jones for 31 years.[18] Reuters responded to Fogarty's piece by stating that "Reuters has a number of staff dedicated to covering this story, including a team of specialist reporters at Point Carbon and a columnist. There has been no change in our editorial policy."[19]

Subsequently climate blogger Joe Romm cited a Reuters article on climate as employing "false balance," and quoted Dr. Stefan Rahmstorf, Co-Chair of Earth System Analysis at the Potsdam Institute that "[s]imply, a lot of unrelated climate skeptics nonsense has been added to this Reuters piece. In the words of the late Steve Schneider, this is like adding some nonsense from the Flat Earth Society to a report about the latest generation of telecommunication satellites. It is absurd." Romm opined that "We can't know for certain who insisted on cramming this absurd and non-germane 'climate sceptics nonsense' into the piece, but we have a strong clue. If it had been part of the reporter's original reporting, you would have expected direct quotes from actual skeptics, because that is journalism 101. The fact that the blather was all inserted without attribution [without citing source] suggests it was added at the insistence of an editor."[20]

Reuters was accused of bias against Israel in its coverage of the 2006 Israel–Lebanon conflict after the wire service used two doctored photos by a Lebanese freelance photographer, Adnan Hajj.[21] In August 2006, Reuters announced it had severed all ties with Hajj and said his photographs would be removed from its database.[22]

In 2010 Reuters was criticised again for "anti-Israeli" bias when it cropped the edges of photos, removing commandos' knives held by activists and a naval commando's blood from photographs taken aboard the Mavi Marmara during the Gaza flotilla raid, a raid that left nine Turkish activists dead. It has been alleged that in two separate photographs, knives held by the activists were cropped out of the versions of the pictures published by Reuters.[23] Reuters said it is standard operating procedure to crop photos at the margins, and replaced the cropped images with the original ones after it was brought to the agency's attention.[23]

In March 2015, the Brazilian affiliate of Reuters released a text containing an interview with Brazilian ex-president Fernando Henrique Cardoso about the ongoing Petrobrás scandal. One of the paragraphs mentioned a comment by a former Petrobrás manager, in which he suggests corruption in that company may date back to Cardoso's presidency. Attached to it, there was a comment between parenthesis: "Podemos tirar se achar melhor" ("we can take it out if [you] think it's better"),[24] which is now absent from the current version of the text.[25] The agency later issued a text in which they confirm the mistake, explaining it was a question by one of the Brazilian editors to the journalist who wrote the original text in English, and that it was not supposed to be published.[26]