The House of Hanover (German: Haus Hannover), whose members are known as Hanoverians, is a European royal house of German[1] origin that ruled Hanover, Great Britain, and Ireland at various times during the 17th to 20th centuries. The house originated in 1635 as a cadet branch of the House of Brunswick-Lüneburg, growing in prestige until Hanover became an Electorate in 1692. George I became the first Hanoverian monarch of Great Britain and Ireland in 1714. At Queen Victoria's death in 1901, the throne of the United Kingdom passed to her eldest son Edward VII, a member of the House of Saxe-Coburg and Gotha. The last reigning members of the House lost the Duchy of Brunswick in 1918 when Germany became a republic.

Dukes and Electors of Brunswick-Lüneburg

From 1814, when Hanover became a kingdom, the British monarch was also King of Hanover.

Upon the death of William IV in 1837, the personal union of the thrones of the United Kingdom and Hanover ended. Succession to the Hanoverian throne was regulated by semi-Salic law (agnatic-cognatic), which gave priority to all male lines before female lines, so that it passed not to Queen Victoria but to her uncle, the Duke of Cumberland.[4]:13,14 In 1901, when Queen Victoria, the last British monarch provided by the House of Hanover, died, her son and heir Edward VII became the first British Monarch of the House of Saxe-Coburg and Gotha, Edward taking his family name from that of his father, Prince Albert of Saxe-Coburg-Gotha.[4]:14

Kings of Hanover after the breakup of the personal union

Kings of Hanover after the breakup of the personal union

After the death of William IV in 1837, the following kings of Hanover continued the dynasty:

Marienburg Castle (Hanover), present seat of the Princes of Hanover

The Kingdom of Hanover ended in 1866 when it was annexed by Kingdom of Prussia and the king of Hanover (and duke of Cumberland) was forced to go into exile in Austria. The 1866 rift between the houses of Hanover and Hohenzollern was settled by the 1913 marriage of Princess Viktoria Luise of Prussia to Ernest Augustus, Duke of Brunswick, the last king's grandson.

At the end of the Thirty Years' War, the Peace of Westphalia (1648) awarded the Prince-Bishopric of Osnabrück alternately to a Catholic bishop and to a cadet branch of Brunswick-Lüneburg.[5] Since the treaty gave cadets priority over heirs and reigning princes, Osnabrück became a form of appanage (in alternation) of the House of Hanover.

Osnabrück was mediatized to Hanover in 1803.

In 1884, the senior branch of the House of Welf became extinct. By semi-Salic law, the House of Hanover would have acceded to the Duchy of Brunswick, but there had been strong Prussian pressure against having George V of Hanover or his son, the Duke of Cumberland, succeed to a member state of the German Empire, at least without strong conditions, including swearing to the German constitution. By a law of 1879, the Duchy of Brunswick established a temporary council of regency to take over at the Duke's death, and if necessary appoint a regent.

The Duke of Cumberland proclaimed himself Duke of Brunswick at the Duke's death, and lengthy negotiations ensued, but were never resolved. Prince Albert of Prussia was appointed regent; after his death in 1906, Duke John Albert of Mecklenburg succeeded him. The Duke of Cumberland's eldest son died in a car accident in 1912; the father renounced Brunswick in favor of his younger son Ernest Augustus, who married the Kaiser's daughter Victoria Louise the same year, swore allegiance to the German Empire, and was allowed to ascend the throne of the Duchy in November 1913. He was a major-general during the First World War; but he was overthrown as Duke of Brunswick in 1918. His father was also deprived of his British titles in 1919, for "bearing arms against Great Britain".

After having left Brunswick Palace, the duke and his family moved back to their exile seat Cumberland Castle at Gmunden, Austria, but in 1924 he received Blankenburg Castle and some other estates in a settlement with the Free State of Brunswick, and moved there in 1930. A few days before Blankenburg was handed over to the Red Army by British and US forces in late 1945, to become part of East Germany, the family was able to quickly move to Marienburg Castle (Hanover) with all their furniture, transported by British army trucks, on the order of King George VI.[6] Duke Ernest Augustus died at Marienburg Castle in 1953. His Herrenhausen Palace in Hanover had been completely destroyed during World War II. His eldest son, Prince Ernest Augustus, sold his remaining property at Herrenhausen Gardens in 1961, but kept the nearby Princely House, a small palace built in 1720 by George I for his daughter Anna Louise. It is now his grandson Ernest Augustus's private home, along with Marienburg Castle. 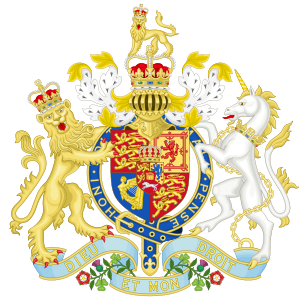 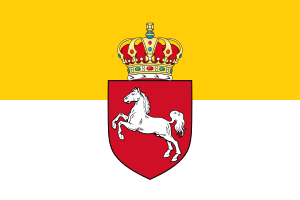 Flag of the House of Hanover

The later heads of the House of Hanover have been:

The family has been resident in Austria since 1866 and thus took on Austrian nationality besides their German and British. Since the later king Ernest Augustus had been created Duke of Cumberland and Teviotdale and Earl of Armagh by his father George III in 1799, these British peerages were inherited by his descendants. In 1914 the title of a Prince of Great Britain and Ireland was additionally granted to the members of the house by King George V. These peerages and titles however were suspended under the Titles Deprivation Act 1917.[Note 2] However, the title Royal Prince of Great Britain and Ireland had been entered into the family's German passports, together with the German titles, in 1914. After the German Revolution of 1918–19, with the abolishment of nobility's privileges,[Note 3] titles officially became parts of the last name. So, curiously, the British prince's title is still part of the family's last name in their German passports, while it is no longer mentioned in their British documents.[7]

On 29 August 1931, Ernest Augustus, Duke of Brunswick, as head of the House of Hanover, declared the formal resumption, for himself and his dynastic descendants, of use of his former British princely title as a secondary title of pretense, which style, "Royal Prince of Great Britain and Ireland", his grandson, the current head of the house, also called Ernest Augustus, continues to claim.[8] He has the right to petition under the Titles Deprivation Act 1917 for the restoration of his ancestors' suspended British peerages Duke of Cumberland and Teviotdale and Earl of Armagh, but he has not done so. His father, another Ernest Augustus, did, however, successfully claim British nationality after World War II by virtue of a hitherto overlooked (and since repealed) provision of the Sophia Naturalization Act 1705.[9] According to the decision taken by a court of the House of Lords, all family members bear the last name Guelph in the UK and are styled Royal Highnesses in their documents.

Georgian architecture gives distinction to the architectural styles current between 1714 and 1830 in most English-speaking countries.

This audio file was created from a revision of the "House of Hanover" article dated , and does not reflect subsequent edits to the article. (Audio help)
More spoken articles