The phrase itself was earlier used by Albert Camus in 1946,[3] and by Bernard Lewis in an article in the September 1990 issue of The Atlantic Monthly titled "The Roots of Muslim Rage".[4] Even earlier, the phrase appears in a 1926 book regarding the Middle East by Basil Mathews: Young Islam on Trek: A Study in the Clash of Civilizations (p. 196).

This expression derives from clash of cultures, already used during the colonial period and the Belle Époque.[5]

Huntington began his thinking by surveying the diverse theories about the nature of global politics in the post-Cold War period. Some theorists and writers argued that human rights, liberal democracy, and capitalist free market economy had become the only remaining ideological alternative for nations in the post-Cold War world. Specifically, Francis Fukuyama argued that the world had reached the 'end of history' in a Hegelian sense.

Huntington believed that while the age of ideology had ended, the world had only reverted to a normal state of affairs characterized by cultural conflict. In his thesis, he argued that the primary axis of conflict in the future will be along cultural and religious lines.[6]

As an extension, he posits that the concept of different civilizations, as the highest rank of cultural identity, will become increasingly useful in analyzing the potential for conflict.

It is my hypothesis that the fundamental source of conflict in this new world will not be primarily ideological or primarily economic. The great divisions among humankind and the dominating source of conflict will be cultural. Nation states will remain the most powerful actors in world affairs, but the principal conflicts of global politics will occur between nations and groups of different civilizations. The clash of civilizations will dominate global politics. The fault lines between civilizations will be the battle lines of the future.[2]

In the end of the article, he writes:

This is not to advocate the desirability of conflicts between civilizations. It is to set forth descriptive hypothesis as to what the future may be like.[2]

In addition, the clash of civilizations, for Huntington, represents a development of history. In the old time, the history of international system was mainly about the struggles between monarchs, nations and ideologies. Those conflicts were primarily seen within Western civilization. But after the end of the cold war, world politics had been moved into a new aspect in which non- Western civilizations were no more the exploited recipients of Western civilization but become another important actor joining the West to shape and move the world history.[7]

Major civilizations according to Huntington

The clash of civilizations according to Huntington (1996), as presented in the book.[8]

Huntington divided the world into the "major civilizations" in his thesis as such:

Russia and India are what Huntington terms 'swing civilizations' and may favor either side. Russia, for example, clashes with the many Muslim ethnic groups on its southern border (such as Chechnya) but—according to Huntington—cooperates with Iran to avoid further Muslim-Orthodox violence in Southern Russia, and to help continue the flow of oil. Huntington argues that a "Sino-Islamic connection" is emerging in which China will cooperate more closely with Iran, Pakistan, and other states to augment its international position.

Huntington also argues that civilizational conflicts are "particularly prevalent between Muslims and non-Muslims", identifying the "bloody borders" between Islamic and non-Islamic civilizations. This conflict dates back as far as the initial thrust of Islam into Europe, its eventual expulsion in the Iberian reconquest and the attacks of the Ottoman Turks on Eastern Europe and Vienna. Huntington also believes that some of the factors contributing to this conflict are that both Christianity (which has influenced Western civilization) and Islam are:

More recent factors contributing to a Western-Islamic clash, Huntington wrote, are the Islamic Resurgence and demographic explosion in Islam, coupled with the values of Western universalism—that is, the view that all civilizations should adopt Western values—that infuriate Islamic fundamentalists. All these historical and modern factors combined, Huntington wrote briefly in his Foreign Affairs article and in much more detail in his 1996 book, would lead to a bloody clash between the Islamic and Western civilizations. The political party Hizb ut-Tahrir also reiterate Huntington's views in their published book, The Inevitability of Clash of Civilisation.[10]

Why Civilizations will Clash

Huntington offers six explanations for why civilizations will clash:

The West versus the Rest

Critics of Huntington's ideas often extend their criticisms to traditional cultures and internal reformers who wish to modernize without adopting the values and attitudes of Western culture. These critics[who?] sometimes claim that to modernize it is necessary to become Westernized to a very large extent, so that sources of tension with the West will be reduced.

Japan, China and the East Asian Tigers have modernized in many respects while maintaining traditional or authoritarian societies which distinguish them from the West. Some of these countries have clashed with the West and some have not.

Perhaps the ultimate example of non-Western modernization is Russia, the core state of the Orthodox civilization. Huntington argues that Russia is primarily a non-Western state although he seems to agree that it shares a considerable amount of cultural ancestry with the modern West. According to Huntington, the West is distinguished from Orthodox Christian countries by the experience of the Renaissance, Reformation, the Enlightenment, overseas colonialism rather than contiguous expansion and colonialism, and a recent re-infusion of Classical culture through ancient Greece rather than through the continuous trajectory of the Byzantine Empire.

Huntington refers to countries that are seeking to affiliate with another civilization as "torn countries." Turkey, whose political leadership has systematically tried to Westernize the country since the 1920s, is his chief example. Turkey's history, culture, and traditions are derived from Islamic civilization, but Turkey's elite, beginning with Mustafa Kemal Atatürk who took power as first President of the Republic of Turkey in 1923, imposed western institutions and dress, embraced the Latin alphabet, joined NATO, and is seeking to join the European Union.

Mexico and Russia are also considered to be torn by Huntington. He also gives the example of Australia as a country torn between its Western civilizational heritage and its growing economic engagement with Asia.

According to Huntington, a torn country must meet three requirements to redefine its civilizational identity. Its political and economic elite must support the move. Second, the public must be willing to accept the redefinition. Third, the elites of the civilization that the torn country is trying to join must accept the country.

The book claims that to date no torn country has successfully redefined its civilizational identity, this mostly due to the elites of the 'host' civilization refusing to accept the torn country, though if Turkey gained membership in the European Union, it has been noted that many of its people would support Westernization, as in the following quote by EU Minister Egemen Bağış: "This is what Europe needs to do: they need to say that when Turkey fulfills all requirements, Turkey will become a member of the EU on date X. Then, we will regain the Tukish public opinion support in one day.".[13] If this were to happen, it would, according to Huntington, be the first to redefine its civilizational identity.

Huntington has fallen under the stern critique of various academic writers, who have either empirically, historically, logically, or ideologically challenged his claims (Fox, 2005; Mungiu Pippidi & Mindruta, 2002; Henderson & Tucker, 2001; Russett, Oneal, & Cox, 2000; Harvey, 2000).[14][15][16][17] In an article explicitly referring to Huntington, scholar Amartya Sen (1999) argues that "diversity is a feature of most cultures in the world. Western civilization is no exception. The practice of democracy that has won out in the modern West is largely a result of a consensus that has emerged since the Enlightenment and the Industrial Revolution, and particularly in the last century or so. To read in this a historical commitment of the West—over the millennia—to democracy, and then to contrast it with non-Western traditions (treating each as monolithic) would be a great mistake" (p. 16).[18]

In his 2003 book Terror and Liberalism, Paul Berman argues that distinct cultural boundaries do not exist in the present day. He argues there is no "Islamic civilization" nor a "Western civilization", and that the evidence for a civilization clash is not convincing, especially when considering relationships such as that between the United States and Saudi Arabia. In addition, he cites the fact that many Islamic extremists spent a significant amount of time living and/or studying in the Western world. According to Berman, conflict arises because of philosophical beliefs various groups share (or do not share), regardless of cultural or religious identity.[19]

Edward Said issued a response to Huntington's thesis in his 2001 article, "The Clash of Ignorance".[20] Said argues that Huntington's categorization of the world's fixed "civilizations" omits the dynamic interdependency and interaction of culture. A longtime critic of the Huntingtonian paradigm, and an outspoken proponent of Arab issues, Edward Said (2004) also argues that the clash of civilizations thesis is an example of "the purest invidious racism, a sort of parody of Hitlerian science directed today against Arabs and Muslims" (p. 293).[21]

Noam Chomsky has criticized the concept of the clash of civilizations as just being a new justification for the United States "for any atrocities that they wanted to carry out", which was required after the Cold War as the Soviet Union was no longer a viable threat.[22] 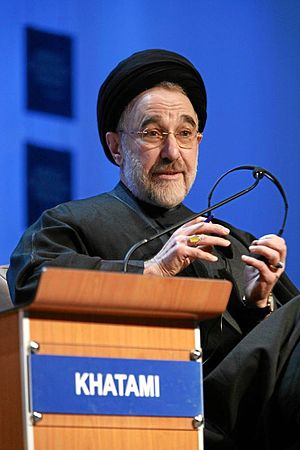 Mohammad Khatami, reformist president of Iran (in office 1997–2005), introduced the theory of Dialogue Among Civilizations as a response to Huntington's theory.

The Alliance of Civilizations (AOC) initiative was proposed at the 59th General Assembly of the United Nations in 2005 by the President of the Spanish Government, José Luis Rodríguez Zapatero and co-sponsored by the Turkish Prime Minister Recep Tayyip Erdoğan. The initiative is intended to galvanize collective action across diverse societies to combat extremism, to overcome cultural and social barriers between mainly the Western and predominantly Muslim worlds, and to reduce the tensions and polarization between societies which differ in religious and cultural values.

Huntington's geopolitical model, especially the structures for North Africa and Eurasia, is largely derived from the "Intermediate Region" geopolitical model first formulated by Dimitri Kitsikis and published in 1978.[28] The Intermediate Region, which spans the Adriatic Sea and the Indus River, is neither western nor eastern (at least, with respect to the Far East) but is considered distinct.

Concerning this region, Huntington departs from Kitsikis contending that a civilizational fault line exists between the two dominant yet differing religions (Eastern Orthodoxy and Sunni Islam), hence a dynamic of external conflict. However, Kitsikis establishes an integrated civilization comprising these two peoples along with those belonging to the less dominant religions of Shiite Islam, Alevism, and Judaism. They have a set of mutual cultural, social, economic and political views and norms which radically differ from those in the West and the Far East.