Bentonite is an absorbent aluminium phyllosilicate clay consisting mostly of montmorillonite. It was named by Wilbur C. Knight in 1898 after the Cretaceous Benton Shale near Rock River, Wyoming.[1][2]

The different types of bentonite are each named after the respective dominant element, such as potassium (K), sodium (Na), calcium (Ca), and aluminium (Al). Experts debate a number of nomenclatorial problems with the classification of bentonite clays. Bentonite usually forms from weathering of volcanic ash, most often in the presence of water. However, the term bentonite, as well as a similar clay called tonstein, has been used to describe clay beds of uncertain origin. For industrial purposes, two main classes of bentonite exist: sodium and calcium bentonite. In stratigraphy and tephrochronology, completely devitrified (weathered volcanic glass) ash-fall beds are commonly referred to as K-bentonites when the dominant clay species is illite. Other common clay species that are sometimes dominant are montmorillonite and kaolinite. Kaolinite-dominated clays are commonly referred to as tonsteins and are typically associated with coal.

Sodium bentonite expands when wet, absorbing as much as several times its dry mass in water. Because of its excellent colloidal properties,[3] it is often used in drilling mud for oil and gas wells and boreholes for geotechnical and environmental investigations.[2] The property of swelling also makes sodium bentonite useful as a sealant, since it provides a self-sealing, low permeability barrier. It is used to line the base of landfills, for example. Various surface modifications to sodium bentonite improve some rheological or sealing performance in geoenvironmental applications, for example, the addition of polymers.[4]

Calcium bentonite is a useful adsorbent of ions in solution,[5] as well as fats and oils. It is the main active ingredient of fuller's earth, probably one of the earliest industrial cleaning agents.[6]

Calcium bentonite may be converted to sodium bentonite (termed sodium beneficiation or sodium activation) to exhibit many of sodium bentonite's properties by an ion exchange process. In common usage, this means adding 5–10% of a soluble sodium salt such as sodium carbonate to wet bentonite, mixing well, and allowing time for the ion exchange to take place and water to remove the exchanged calcium.[citation needed] Some properties, such as viscosity and fluid loss of suspensions, of sodium-beneficiated calcium bentonite (or sodium-activated bentonite) may not be fully equivalent to those of natural sodium bentonite.[3] For example, residual calcium carbonates (formed if exchanged cations are insufficiently removed) may result in inferior performance of the bentonite in geosynthetic liners.[7]

Also known as potash bentonite or K-bentonite, potassium bentonite is a potassium-rich illitic clay formed from alteration of volcanic ash.[8] 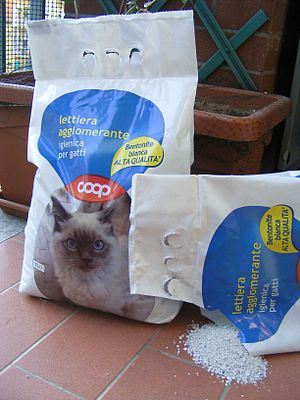 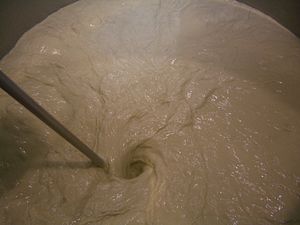 Creating a bentonite slurry for fining after wine pressing

The main uses of bentonite are for drilling mud, binder (e.g. foundry-sand bond, iron ore pelletizer), purifier, absorbent (e.g. pet litter), and as a groundwater barrier.[2] As of around 1990, almost half of the US production of bentonite was used for drilling mud.[2]

Bentonite is used in drilling fluids to lubricate and cool the cutting tools, to remove cuttings, and to help prevent blowouts.[2] Much of bentonite's usefulness in the drilling and geotechnical engineering industry comes from its unique rheological properties. Relatively small quantities of bentonite suspended in water form a viscous, shear-thinning material. Most often, bentonite suspensions are also thixotropic, although rare cases of rheopectic behavior have also been reported. At high enough concentrations (about 60 grams of bentonite per litre of suspension), bentonite suspensions begin to take on the characteristics of a gel (a fluid with a minimum yield strength required to make it move). So, it is a common component of drilling mud used to curtail drilling fluid invasion by its propensity for aiding in the formation of mud cake.

Bentonite has been widely used as a foundry-sand bond in iron and steel foundries. Sodium bentonite is most commonly used for large castings that use dry molds, while calcium bentonite is more commonly used for smaller castings that use "green" or wet molds.[2] Bentonite is also used as a binding agent in the manufacture of iron ore (taconite) pellets as used in the steelmaking industry. Bentonite, in small percentages, is used as an ingredient in commercially designed clay bodies and ceramic glazes. Bentonite clay is also used in pyrotechnics to make end plugs and rocket engine nozzles.

The ionic surface of bentonite has a useful property in making a sticky coating on sand grains. When a small proportion of finely ground bentonite clay is added to hard sand and wetted, the clay binds the sand particles into a moldable aggregate known as green sand used for making molds in sand casting. Some river deltas naturally deposit just such a blend of clay silt and sand, creating a natural source of excellent molding sand that was critical to ancient metalworking technology. Modern chemical processes to modify the ionic surface of bentonite greatly intensify this stickiness, resulting in remarkably dough-like yet strong casting sand mixes that stand up to molten metal temperatures.

The same effluvial deposition of bentonite clay onto beaches accounts for the variety of plasticity of sand from place to place for building sand castles. Beach sand consisting of only silica and shell grains does not mold well compared to grains coated with bentonite clay. This is why some beaches are much better for building sand castles than others.

The self-stickiness of bentonite allows high-pressure ramming or pressing of the clay in molds to produce hard, refractory shapes, such as model rocket nozzles. To test whether a particular brand of cat litter is bentonite, simply ram a sample with a hammer into a sturdy tube with a close-fitting rod; bentonite will form a very hard, consolidated plug that is not easily crumbled.

Bentonites are used for decolorizing various mineral, vegetable, and animal oils. They are also used for clarifying wine, liquor, cider, beer, and vinegar.[2]

Bentonite has the property of adsorbing relatively large amounts of protein molecules from aqueous solutions. Consequently, bentonite is uniquely useful in the process of winemaking, where it is used to remove excessive amounts of protein from white wines. Were it not for this use of bentonite, many or most white wines would precipitate undesirable flocculent clouds or hazes upon exposure to warm temperatures, as these proteins denature. It also has the incidental use of inducing more rapid clarification of both red and white wines.

Bentonite is used in a variety of pet care items such as cat litter to absorb the odour and surround the feces. It is also used to absorb oils and grease.

The property of swelling on contact with water makes sodium bentonite useful as a sealant, since it provides a self-sealing, low-permeability barrier. It is used to line the base of landfills to prevent migration of leachate, for quarantining metal pollutants of groundwater, and for the sealing of subsurface disposal systems for spent nuclear fuel.[9] Similar uses include making slurry walls, waterproofing of below-grade walls, and forming other impermeable barriers, e.g., to seal off the annulus of a water well, to plug old wells.

Bentonite can also be "sandwiched" between synthetic materials to create geosynthetic clay liners (GCLs) for the aforementioned purposes. This technique allows for more convenient transport and installation, and it greatly reduces the volume of bentonite required. It is also used to form a barrier around newly planted trees to constrain root growth so as to prevent damage to nearby pipes, footpaths and other infrastructure. Farmers use bentonite to seal retention ponds.

Bentonite has been prescribed as a bulk laxative, and it is also used as a base for many dermatologic formulas.[10] Granular bentonite is being studied for use in battlefield wound dressings.[11]

Bentoquatam is a bentonate-based topical medication intended to act as a shield against exposure to urushiol, the oil found in plants such as poison ivy or poison oak.[12]

The application of clay technology by farmers in northeast Thailand, using bentonite clay, has dramatically reversed soil degradation and resulted in greater economic returns, with higher yields and higher output prices. Studies carried out by The International Water Management Institute and partners in 2002–2003 focused on the application of locally sourced bentonite clays to degraded soils in the region. These applications were carried out in structured field trials. Applying bentonite clays effectively improved yields of forage sorghum grown under rain-fed conditions.[14][15]

Bentonite application also influenced the prices that farmers received for their crops. Production costs are higher, but due to more production and the quality of the food, clay farmers could afford to invest and grow more and better food, compared to nonclay-using farmers.[16][17]

Bentonite slurry walls (also known as diaphragm walls [18] ) are used in construction, where the slurry wall is a trench filled with a thick colloidal mixture of bentonite and water.[19] A trench that would collapse due to the hydraulic pressure in the surrounding soil does not collapse as the slurry balances the hydraulic pressure. Forms for concrete, and rebar, can be assembled in a slurry-filled trench, and then have concrete poured into the form. The liquid concrete being denser displaces the less-dense bentonite slurry and causes the latter to overflow from the trench. This displaced bentonite slurry is then channelled to a recycling unit from which it can subsequently be reused in a new trench elsewhere on the construction site.

In addition, because the colloid is relatively impervious to water, a slurry wall can prevent the seepage of groundwater, which is useful in preventing the further spread of groundwater that has been contaminated by toxic material such as industrial waste.[19]

In 2011, the U.S. was the top producer of bentonite, with almost one-third world share, followed by China and Greece.[20]

Most high-grade natural sodium bentonite is produced from the western United States in an area between the Black Hills of South Dakota and the Bighorn Basin of Wyoming and the Tokat Resadiye region of Turkey.[2] Mixed sodium/calcium bentonite is mined in Greece, Australia, India, Russia, and the Ukraine.