Simplified diagram of a multistage coilgun with three coils, a barrel, and a ferromagnetic projectile

A coilgun or Gauss gun (not a rifle as the barrel is not rifled; named in reference to Carl Friedrich Gauss, who formulated mathematical descriptions of the magnetic effect used by magnetic accelerators) is a type of projectile accelerator consisting of one or more coils used as electromagnets in the configuration of a linear motor that accelerate a ferromagnetic or conducting projectile to high velocity.[1] In almost all coilgun configurations, the coils and the gun barrel are arranged on a common axis.

Coilguns generally consist of one or more coils arranged along a barrel, so the path of the accelerating projectile lies along the central axis of the coils. The coils are switched on and off in a precisely timed sequence, causing the projectile to be accelerated quickly along the barrel via magnetic forces. Coilguns are distinct from railguns, as the direction of acceleration in a railgun is at right angles to the central axis of the current loop formed by the conducting rails. In addition, railguns usually require the use of sliding contacts to pass a large current through the projectile or sabot but coilguns do not necessarily require sliding contacts.[2] Whilst some simple coilgun concepts can use ferromagnetic projectiles or even permanent magnet projectiles, most designs for high velocities actually incorporate a coupled coil as part of the projectile.

The first operational coilgun was developed and patented by Norwegian physicist Kristian Birkeland in 1904.[3]

In 1933, Texan inventor Virgil Rigsby developed a stationary coilgun that was designed to be used like a machine gun. It was powered by a large electrical motor and generator.[4] It appeared in many contemporary science publications, but never piqued the interest of any armed forces. [5]

In a multistage design, further electromagnets are then used to repeat this process, progressively accelerating the projectile. In common coilgun designs, the "barrel" of the gun is made up of a track that the projectile rides on, with the driver into the magnetic coils around the track. Power is supplied to the electromagnet from some sort of fast discharge storage device, typically a battery, or high-capacity high voltage capacitors (one per electromagnet), designed for fast energy discharge. A diode is used to protect polarity sensitive components (such as semiconductors or electrolytic capacitors) from damage due to inverse polarity of the voltage after turning off the coil.

Many hobbyists use low-cost rudimentary designs to experiment with coilguns, for example using photoflash capacitors from a disposable camera, or a capacitor from a standard cathode-ray tube television as the energy source, and a low inductance coil to propel the projectile forward.[6][7]

Though the cost of power switching and other factors can limit projectile energy, a notable benefit of some coilgun designs over simpler railguns is avoiding an intrinsic velocity limit from hypervelocity physical contact and erosion. By having the projectile pulled towards or levitated within the center of the coils as it is accelerated, no physical friction with the walls of the bore occurs. If the bore is a total vacuum (such as a tube with a plasma window) there is no friction at all which helps prolonged reusability.[11][12] 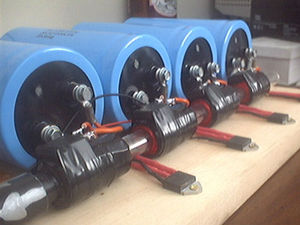 One main obstacle in coilgun design is switching the power through the coils. There are several common solutions—the simplest (and probably least effective) is the spark gap, which releases the stored energy through the coil when the voltage reaches a certain threshold. A better option is to use solid-state switches; these include IGBTs or power MOSFETs (which can be switched off mid-pulse) and SCRs (which release all stored energy before turning off).[13]

A quick-and-dirty method for switching, especially for those using a flash camera for the main components, is to use the flash tube itself as a switch. By wiring it in series with the coil, it can silently and non-destructively (assuming that the energy in the capacitor is kept below the tube's safe operating limits) allow a large amount of current to pass through to the coil. Like any flash tube, ionizing the gas in the tube with a high voltage triggers it. However, a large amount of the energy will be dissipated as heat and light, and, due to the tube being a spark gap, the tube will stop conducting once the voltage across it drops sufficiently, leaving some charge remaining on the capacitor.

The electrical resistance of the coils and the equivalent series resistance (ESR) of the current source dissipate considerable power.

Ideally, 100% of the magnetic flux generated by the coil would be delivered to and act on the projectile, but this is often far from the case due to the common air-core solenoid construction of most coilguns, which are usually relatively simple and inefficient designs made by hobbyists.

With a simple air-cored solenoid, the majority of the magnetic flux is not coupled into the projectile because of the magnetic circuit's high reluctance. The uncoupled flux generates a magnetic field that stores energy in the surrounding air. The energy that is stored in this field does not simply disappear from the magnetic circuit once the capacitor finishes discharging, instead returning to the coilgun's electric circuit. Because the coilgun's electric circuit is inherently analogous to an LC oscillator, the unused energy returns in the reverse direction ('ringing'), which can seriously damage polarized capacitors such as electrolytic capacitors.

Reverse charging can be prevented by a diode connected in reverse-parallel across the capacitor terminals; as a result, the current keeps flowing until the diode and the coil's resistance dissipate the field energy as heat. While this is a simple and frequently utilized solution, it requires an additional expensive high-power diode and a well-designed coil with enough thermal mass and heat dissipation capability in order to prevent component failure.

Some designs attempt to recover the energy stored in the magnetic field by using a pair of diodes. These diodes, instead of being forced to dissipate the remaining energy, recharge the capacitors with the right polarity for the next discharge cycle. This will also avoid the need to fully recharge the capacitors, thus significantly reducing charge times. However, the practicality of this solution is limited by the resulting high recharge current through the equivalent series resistance (ESR) of the capacitors; the ESR will dissipate some of the recharge current, generating heat within the capacitors and potentially shortening their lifetime.

To reduce component size, weight, durability requirements, and most importantly, cost, the magnetic circuit must be optimized to deliver more energy to the projectile for a given energy input. This has been addressed to some extent by the use of back iron and end iron, which are pieces of magnetic material that enclose the coil and create paths of lower reluctance in order to improve the amount of magnetic flux coupled into the projectile. Results can vary widely, depending on the materials used; hobbyist designs may use, for example, materials ranging anywhere from magnetic steel (more effective, lower reluctance) to video tape (little improvement in reluctance). Moreover, the additional pieces of magnetic material in the magnetic circuit can potentially exacerbate the possibility of flux saturation and other magnetic losses.

Another significant limitation of the coilgun is the occurrence of magnetic saturation in the ferromagnetic projectile. When the flux in the projectile lies in the linear portion of its material's B(H) curve, the force applied to the core is proportional to the square of coil current (I)—the field (H) is linearly dependent on I, B is linearly dependent on H and force is linearly dependent on the product BI. This relationship continues until the core is saturated; once this happens B will only increase marginally with H (and thus with I), so force gain is linear. Since losses are proportional to I2, increasing current beyond this point eventually decreases efficiency although it may increase the force. This puts an absolute limit on how much a given projectile can be accelerated with a single stage at acceptable efficiency.

Most of the work to develop coilguns as hyper-velocity launchers has used "air-cored" systems to get around the limitations associated with ferromagnetic projectiles. In these systems, the projectile is accelerated by a moving coil "armature". If the armature is configured as one or more "shorted turns" then induced currents will result as a consequence of the time variation of the current in the static launcher coil (or coils).

Air cored systems also introduce the penalty that much higher currents may be needed than in an "iron cored" system. Ultimately though, subject to the provision of appropriately rated power supplies, air cored systems can operate with much greater magnetic field strengths than "iron cored" systems, so that, ultimately, much higher accelerations and forces should be possible. 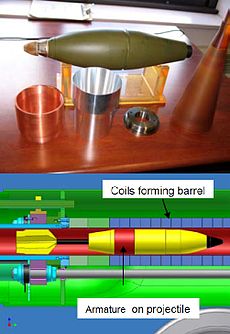 A M934 mortar round is adapted for experimental coilgun launch with a conformal armature tail kit, to be fired through a barrel composed of short solenoidal electromagnets stacked end to end

Small coilguns are recreationally made by hobbyists, typically up to several joules to tens of joules projectile energy (the latter comparable muzzle energy to a typical air gun and an order of magnitude less than a firearm) while ranging from under one percent to several percent efficiency.[14]

Much higher efficiency and energy can be obtained with designs of greater expense and sophistication. In 1978, Bondaletov in the USSR achieved record acceleration with a single stage by sending a 2-gram ring to 5000 m/s in 1 cm of length, but the most efficient modern designs tend to involve many stages.[15] Above 90% efficiency is estimated for some vastly larger superconducting concepts for space launch.[12] An experimental 45-stage DARPA coilgun mortar design is 22% efficient, with 1.6 megajoules KE delivered to a round.[16] 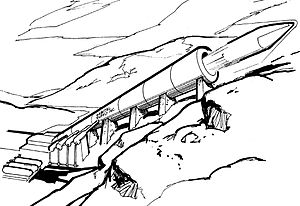 Though facing the challenge of competitiveness versus conventional guns (and sometimes railgun alternatives), coilguns are being researched for weaponry.[16]

The DARPA Electromagnetic Mortar program is an example of potential benefits, if practical challenges like sufficiently low weight can be managed. The coilgun would be relatively silent with no smoke giving away its position, though a coilgun projectile would still create a sonic boom if supersonic. Adjustable yet smooth acceleration of the projectile throughout the barrel can allow somewhat higher velocity, with a predicted range increase of 30% for a 120mm EM mortar over the conventional version of similar length. With no separate propellant charges to load, the researchers envision the firing rate to approximately double.[16][17]

In 2006, a 120mm prototype was under construction for evaluation, though time before reaching field deployment, if such occurs, was estimated then as 5 to 10+ years by Sandia National Laboratories.[16][17] In 2011, development was proposed of an 81mm coilgun mortar to operate with a hybrid-electric version of the future Joint Light Tactical Vehicle.[18][19]

Electromagnetic aircraft catapults are planned, including on board future U.S. Gerald R. Ford class aircraft carriers. An experimental induction coilgun version of an Electromagnetic Missile Launcher (EMML) has been tested for launching Tomahawk missiles.[20] A coilgun-based active defense system for tanks is under development at HIT in China.[21]

Coilgun potential has been perceived as extending beyond military applications. Challenging and corresponding to a magnitude of capital investment that few entities could readily fund, gigantic coilguns with projectile mass and velocity on the scale of gigajoules of kinetic energy (as opposed to megajoules or less) have not been developed so far, but such have been proposed as launchers from the Moon or from Earth: