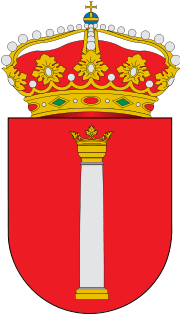 The Colonna family is an Italian noble family. It was powerful in medieval and Renaissance Rome, supplying one Pope and many other Church and political leaders. The family is notable for its bitter feud with the Orsini family over influence in Rome, until it was stopped by Papal Bull in 1511. In 1571, the heads of both families married nieces of Pope Sixtus V. Thereafter, historians recorded that "no peace had been concluded between the princes of Christendom, in which they had not been included by name". [1]

According to tradition, the Colonna are a branch of the Counts of Tusculum — by Peter (1099–1151) son of Gregory III, called Peter "de Columna" from his property, the Columna Castle, in Colonna, Alban Hills.

Though they claimed to descend from a branch of the Julio-Claudian dynasty, no actual genealogical connection between Caesar's family and the Counts of Tusculum have ever been found.

The first cardinal from the family was appointed in 1206 when Giovanni Colonna di Carbognano was made Cardinal Deacon of SS. Cosma e Damiano.[2] For many years, cardinal Giovanni di San Paolo (elevated in 1193) was identified as member of the Colonna family and therefore its first representative in the College of Cardinals, but modern scholars have established that this was based on the false information from the beginning of 16th century.[3]

Giovanni Colonna (1206 c.[4]- ), nephew of Cardinal Giovanni Colonna di Carbognano, made his solemn vows as a Dominican c. 1228 and received his theological and philosophical training at the Roman studium of Santa Sabina, the forerunner of the Pontifical University of Saint Thomas Aquinas, Angelicum. He served as the Provincial of the Roman province of the Dominican Order and led the provincial chapter of 1248 at Anagni.[5] Colonna was appointed as Archbishop of Messina in 1255.[6]

In 1248, after having dedicated her entire life to serving God and the poor, Margherita Colonna died. A member of the Franciscan Order, she was beatified by Pope Pius IX in 1848.

At this time a rivalry began with the pro-papal Orsini family, leaders of the Guelph faction. This reinforced the pro-Emperor Ghibelline course that the Colonna family followed throughout the period of conflict between the Papacy and the Holy Roman Empire.

In 1297, Cardinal Jacopo (Giacomo Colonna) disinherited his brothers Ottone, Matteo, and Landolfo of their lands. The latter three appealed to Pope Boniface VIII who ordered Jacopo to return the land, and furthermore hand over the family's strongholds of Colonna, Palestrina, and other towns to the Papacy. Jacopo refused; in May, Boniface removed him from the College of Cardinals and excommunicated him and his followers.

The Colonna family (aside from the three brothers allied with the Pope) declared that Boniface had been elected illegally following the unprecedented abdication of Pope Celestine V. The dispute lead to open warfare, and in September Boniface appointed Landolfo to the command of his army, to put down the revolt of Landolfo's own Colonna relatives. By the end of 1298 Landolfo had captured Colonna, Palestrina and other towns and razed them to the ground. The family's lands were distributed among Landolfo and his loyal brothers; the rest of the family fled Italy.

The exiled Colonna allied with the Pope's other great enemy, Philip IV of France, who in his youth had been tutored by Cardinal Egidio Colonna. In September 1303, Sciarra and Philipp's advisor, Guillaume de Nogaret, led a small force into Anagni to arrest of Boniface VIII and bring him to France, where was to stand trial. While the two managed to apprehend the Pope and Sciarra reportedly slapped the pope in the face in the process, which was accordingly dubbed the "Outrage of Anagni". The attempt eventually failed after a few days, when locals freed the Pope. However, Boniface VIII died on the 11th October, allowing France to dominate his weaker successors during the Avignon papacy.

The family remained at the centre of civic and religious life throughout the late Middle Ages. Cardinal Egidio Colonna died at the papal court in Avignon in 1314. An Augustinian, he had studied theology in Paris under St. Thomas of Aquinas to become one of the most authoritative thinkers of his time.

In the 14th century, the family sponsored the decoration of the Church of San Giovanni, most notably the floor mosaics.

In 1328, Louis IV of Germany marched into Italy for his coronation as Holy Roman Emperor. As Pope John XXII was residing in Avignon and had publicly declared that he would not crown Louis, the King decided to be crowned by a member of the Roman aristocracy, who proposed Sciarra Colonna. In honor of this event, the Colonna family was granted the privilege of using the imperial pointed crown on top of their coat of arms.

The celebrated poet Petrarch, was a great friend of the family, in particular of Giovanni Colonna and often lived in Rome as a guest of the family. He composed a number of sonnets for special occasions within the Colonna family, including "Colonna the Glorious, the great Latin name upon which all our hopes rest". In this period, the Colonna started claiming they were descendants of the Julio-Claudian dynasty.

At the Council of Constance, the Colonna finally succeeded in their papal ambitions when Oddone Colonna was elected on 14 November 1417. As Martin V, he reigned until his death on 20 February 1431.

Vittoria Colonna became famous in the sixteenth century as a poet and a figure in literate circles.

In 1627 Anna Colonna, daughter of Filippo I Colonna, married Taddeo Barberini of the family Barberini; nephew of Pope Urban VIII.

The Colonna family have been Prince Assistants to the Papal Throne[8] since 1710, though their papal princely title only dates from 1854.

The family residence in Rome, the Palazzo Colonna, is open to the public every Saturday morning. 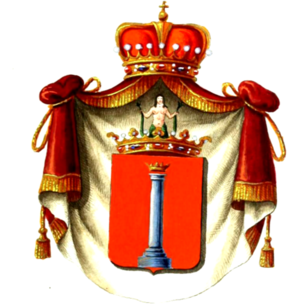 Princely arms of the family