The Detroit Free Press is the largest daily newspaper in Detroit, Michigan, USA. The Sunday edition is entitled the Sunday Free Press. It is sometimes informally referred to as the "Freep" (reflected in the paper's web address, www.freep.com). It primarily serves Wayne, Oakland, Macomb, Livingston, Washtenaw, and Monroe counties.

The Free Press is also the largest city newspaper owned by Gannett, which also publishes USA Today. The Free Press has received ten Pulitzer Prizes[2] and four Emmy Awards.[3] Its motto is "On Guard for 184 Years".

The newspaper was first published as the Democratic Free Press and Michigan Intelligencer May 5, 1831. The first issues were printed on a Washington press purchased from the discontinued Oakland Chronicle of Pontiac, Michigan. It was hauled from Pontiac in a wagon over rough roads to a building at Bates and Woodbridge streets in Detroit. The press could produce 250 pages an hour, hand operated by two men. The first issues were 14 by 20 inches (360 mm × 510 mm) in size, with five columns of type. Sheldon McKnight became the first publisher with John Pitts Sheldon as editor.

In the 1850s, the paper was developed into a leading Democratic publication under the ownership of Wilbur F. Storey. Storey left for the Chicago Times in 1861, taking a lot of the staff with him.[4] In the 1870s ownership passed to William E. Quinby, who continued its Democratic leanings and established a London, England edition.[5]

In 1940, the Knight Newspapers (later Knight Ridder) purchased the Free Press. During the following 47 years the Free Press competed with The Detroit News, and the Detroit Times—until it ceased publication in November 1960, in the southeastern Michigan market. The Free Press was delivered and sold as a morning paper while the News was sold and delivered as an evening newspaper.

In 1987, the paper entered into a one hundred-year joint operating agreement with its rival, combining business operations while maintaining separate editorial staffs. The combined company is called the Detroit Media Partnership. The two papers also began to publish joint Saturday and Sunday editions, though the editorial content of each remained separate. At the time, the Detroit Free Press was the tenth highest circulation paper in the United States, and the combined Detroit News and Free Press was the country's fourth largest Sunday paper.

July 13, 1995, Newspaper Guild-represented employees of the Free Press and News and the pressmen, printers and Teamsters working for the "Detroit Newspapers" distribution arm went on strike. By October, about 40% of the editorial staffers had crossed the picket line, and many trickled back over the next months while others stayed out for the two and a half years of the strike. The strike was resolved in court three years later, and the unions remain active at the paper, representing a majority of the employees under their jurisdiction. 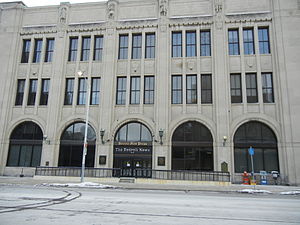 In 1998, the Free Press vacated its former headquarters in downtown Detroit and moved to offices into the News building.

August 3, 2005, Knight Ridder sold the Free Press to the Gannett company, which had previously owned and operated the News. The News, in turn, was sold to MediaNews Group; Gannett continues to be the managing partner in the papers' joint operating agreement.

The Free Press resumed publication of its own Sunday edition, May 7, 2006, without any content from the News. A quirk in the operating agreement, however, allows the News to continue printing its editorial page in the Sunday Free Press. 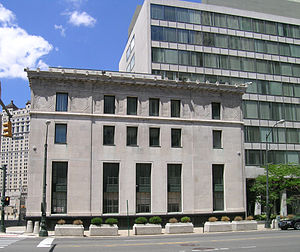 December 16, 2008, Detroit Media Partnership (DMP) announced a plan to limit weekday home delivery for both dailies to Thursday and Friday only. On other weekdays the paper sold at newsstands would be smaller, about 32 pages, and redesigned. This arrangement went into effect March 30, 2009.[6]

The Free Press entered a news partnership with CBS owned-and-operated station WWJ-TV channel 62 in March 2009 to produce a morning news show called First Forecast Mornings. Prior to the partnership, WWJ aired absolutely no local newscast at all.[7]

In February 2014, the DMP announced its offices along with those of the Free Press and The Detroit News would occupy six floors in both the old and new sections of the former Federal Reserve building at 160 West Fort Street. The partnership expected to place signs on the exterior similar to those on the former offices.[8][9] The move took place October 24–27, 2014.[10]