From Infogalactic: the planetary knowledge core
(Redirected from Diocese of Le Mans)
Jump to: navigation, search

It comprises the entire department of Sarthe. Prior to the French Revolution it included 636 parishes and was one of the most extensive dioceses of France; at the time of the Concordat of 1801, it lost some parishes in Vendômois and Normandy and acquired some in Anjou. The Diocese of Le Mans embraced 665 communes from then up to the year 1855, when the department of Mayenne was detached from it to form the Diocese of Laval.

The origin of the Diocese of Le Mans has given rise to very complicated discussions among scholars, based on the value of the Gesta domni Aldrici, and of the Actus Pontificum Cenomannis in urbe degentium, both compiled during the episcopate of Aldric (832-857).

The "Gesta" relate that Aldric had the bodies of Saints Julianus, Turibius, Pavatius, Romanus, Liborius, and Hadoindus, first bishops of Mans, brought to his cathedral; the Acts make St. Julianus one of the seventy-two disciples of Christ and state that he arrived at Le Mans with two companions: Turibius, who became bishop under Antoninus (138-161), and Pavatius who was bishop under Maximinus (235-238) and under Aurelian (270-275), in which event, Pavatius would have lived over two hundred years. Liborius, successor of Pavatius, would have been the contemporary of Valentinian (364-375).

According to the Catholic Encyclopedia, "these chronological absurdities of the Acts have led Msgr Duchesne to conclude that the first Bishop of Le Mans whose episcopate can be dated with certainty is Victurius, who attended the Councils of Angers and of Tours, in 453 and 461, and to whom Gregory of Tours alludes as 'a venerable confessor'. Turibius who, according to the Acts, was the successor of Julianus, was, on the contrary, successor to Victurius and occupied the see from 490 to 496." 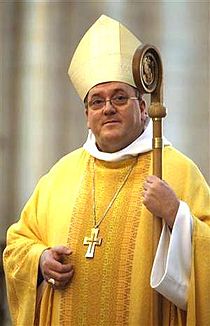 During the episcopate of Berecharius (655-70) the body of St. Scholastica was brought from the monastery of Fleury to Le Mans; the monastery erected to shelter the remains of the saint was destroyed by the Northmen in the second half of the ninth century. A portion of her relics was brought in 874 by the Empress Richilda to the monastery of Juvigny les Dames. The remaining portion was conveyed to the interior of the citadel and placed in the apse of the collegiate church of St. Pierre la Cour, which served the counts of Maine as a domestic chapel. The fire that destroyed Le Mans, 3 September 1134, also consumed the shrine of St. Scholastica, and only a few calcined bones were left. On 11 July 1464, a confraternity was erected in honour of St. Scholastica, and on 23 November 1876, she was officially proclaimed patroness of Le Mans.

For more details on this topic, see Prytanée National Militaire.

The Jesuit college of La Flèche, founded in 1603 by Henry IV, enjoyed a great reputation for a century and a half, and Marshal de Guébriant, Descartes, Marin Mersenne, Prince Eugene of Savoy, and Séguier were all numbered among its students. The Dominican convent of Le Mans, begun about 1219, in fact during the lifetime of St. Dominic, was eminently prosperous, thanks to the benefactions of John of Troeren, an English lord; the theologian Nicolas Coeffeteau, who died in 1623, was one of its glories, before becoming Bishop of Marseille. The French Revolution swept away this convent.

The diocese honours in a special manner as saints: Peregrinus, Marcoratus, and Viventianus, martyrs; Hilary of Oizé, nephew of St. Hilary of Poitiers (in the fifth century); Bommer, Almirus, Leonard, and Ulphace, hermits; Gault, Front, and Brice, solitaries and previously monks of Micy; Fraimbault, hermit, founder of a small monastery in the valley of Gabrone; Calais, hermit and founder of the monastery of Anisole, from whom the town of Saint-Calais took its name; Laumer, successor to St. Calais; Guingalois or Guénolé, founder of the monastery of Landevenec in Brittany, whose relics are venerated at Château du Loir.

All in the sixth century: Rigomer, monk at Souligné, and Ténestine, his penitent, both of whom were acquitted before Childebert, through the miracle of Palaiseau, of accusations made against them (d. about 560); Longis, solitary, and Onofletta, his penitent; Siviard, Abbot of Anisole and author of the life of St. Calais (d. 681); the Irish St. Cérota, and her mistress Osmana, daughter of a king of Ireland, died a solitary near St-Brieuc, in the seventh century; Ménélé, and Savinian (d. about 720), natives of Précigné, who repaired to Auvergne to found the Abbey of Ménat, on the ruins of the hermitage where St. Calais had formerly lived; there is also a particular devotion in Le Mans to Blessed Ralph de La Fustaye, monk (twelfth century), disciple of Blessed Robert d'Arbrissel and founder of the Abbey of St. Sulpice, in the forest of Nid de Merle in the Diocese of Rennes. The celebrated Abbot de Rancé made his novitiate at Perseigne Abbey in the Diocese of Le Mans. Also there may be mentioned as natives of the diocese, Urbain Grandier, the celebrated curé of Loudun, burned to death for sorcery in 1634; and Mersenne, the Minim (d. 1648), philosopher and mathematician and friend of Descartes and Pascal.

The cathedral of St. Julian of Mans, rebuilt towards the year 1100, exhibits specimens of all styles of architecture up to the fifteenth century, its thirteenth century choir being one of the most remarkable in France. The church of Notre-Dame de la Couture dates from the thirteenth, fourteenth, and fifteenth centuries. The Abbey of Solesmes, founded by Geoffroy de Sablé in 993 and completed in 1095, has a thirteenth-century which is a veritable museum of sculptures of the end of the fifteenth and sixteenth centuries. Its "Entombment of Christ," in terracotta, is famous; the Mary Magdalen in the group, already celebrated even in the fifteenth century for its beauty attracted the attention of Richelieu, who thought of having it brought to Paris. Several sculptures depicting scenes in the life of the Virgin Mary form a series unique in France.

Pilgrimages to Notre-Dame de Toutes Aides at Saint-Remy du Plein, Notre-Dame de La Faigne at Pontvallain, and Notre-Dame des Bois at La Suze, date back to primitive times. The chapel of Notre Dame de Torcé, erected in the sixth century, has been much frequented by pilgrims since the eleventh century. Besides these places of pilgrimage may be mentioned those of Notre-Dame de Labit at Domfront, and of Notre-Dame du Chene at Vion, near Sablé, which can be traced to 1494. It was established in the place where in former times Urban II had preached the First Crusade.