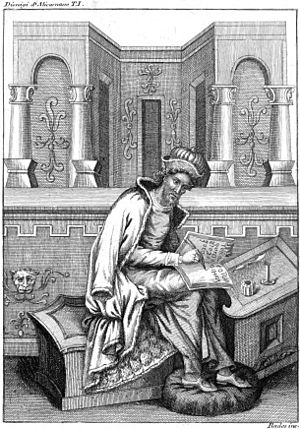 Dionysius of Halicarnassus (Greek: Διονύσιος Ἀλεξάνδρου Ἁλικαρνᾱσσεύς "Dionysios son of Alexandros of Halikarnassos"; c. 60 BC – after 7 BC) was a Greek historian and teacher of rhetoric, who flourished during the reign of Caesar Augustus. His literary style was Atticistic — imitating Classical Attic Greek in its prime.

Dionysius' opinion of the necessity of a promotion of paideia within education, from true knowledge of Classical sources, endured for centuries in a form integral to the identity of the Greek elite.[1]

He was a Halicarnassusian.[1] At some time he moved to Rome after the termination of the civil wars, and spent twenty-two years studying Latin and literature and preparing materials for his history. During this period, he gave lessons in rhetoric, and enjoyed the society of many distinguished men. The date of his death is unknown.[2] In the 19th century, it was commonly supposed that he was the ancestor of Aelius Dionysius of Halicarnassus.[3]

His great work, entitled Ῥωμαϊκὴ Ἀρχαιολογία (Rhōmaikē archaiologia, Roman Antiquities), embraced the history of Rome from the mythical period to the beginning of the First Punic War. It was divided into twenty books, of which the first nine remain entire, the tenth and eleventh are nearly complete, and the remaining books exist in fragments in the excerpts of Constantine Porphyrogenitus and an epitome discovered by Angelo Mai in a Milan manuscript. The first three books of Appian, Plutarch's Life of Camillus and Life of Coriolanus also embody much of Dionysius.

His chief object was to reconcile the Greeks to the rule of Rome, by dilating upon the good qualities of their conquerors and also by arguing, using more ancient sources, that the Romans were genuine descendants of the older Greeks.[4][5] According to him, history is philosophy teaching by examples, and this idea he has carried out from the point of view of a Greek rhetorician. But he carefully consulted the best authorities, and his work and that of Livy are the only connected and detailed extant accounts of early Roman history.

Dionysius was also the author of several rhetorical treatises, in which he shows that he has thoroughly studied the best Attic models:

The last two treatises are supplemented by letters to Gn. Pompeius and Ammaeus (two).[2]

Dionysian imitatio is the literary method of imitation as formulated by Dionysius, who conceived it as the rhetorical practice of emulating, adapting, reworking, and enriching a source text by an earlier author.[6][7]

Dionysius' concept marked a significant departure from the concept of mimesis formulated by Aristotle in the 4th century BC, which was only concerned with "imitation of nature" and not "imitation of other authors."[6] Latin orators and rhetoricians adopted Dionysius' method of imitatio and discarded Aristotle's mimesis.[6]

A full bibliography of the rhetorical works is given in W. Rhys Roberts's edition of the Three Literary Letters (1901); the same author published an edition of the De compositione verborum (1910, with trans.).