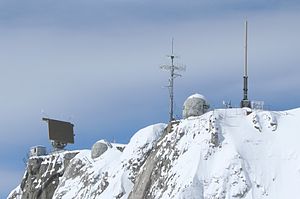 FLORAKO is a Swiss radar system for military and civil aviation. The acronym stands for FLORIDA radar replacement air radar system capable communication system (in German: FLORIDA Radarersatz Radarluftlagesystem Kommunikationssystem) in the initial phase of the project meant the name FLORES RALUS KOMSYS and emerged from the project name of the sub-systems .[1]

The FLORAKO System was Introduced on 2 February 2004 by the Swiss Air Force. It replaces the older FLORIDA Airspace monitoring and management system, which dated back from the 1960s. The acquisition costs amounted to approximately 728 million Swiss francs. The four radar sites [2] Mount Pilatus[3] Scopi,[4] Weisshorn and Weissfluh[5] are classified and therefore not publicly available. Supplier of the system was Thales Raytheon Systems, a joint venture between Raytheon Company and Thales Group.[6] Thales Raytheon Systems was also involved of the further expansion of the system that was delivered in 2008 and still carries out further upgrades of the system.[7] 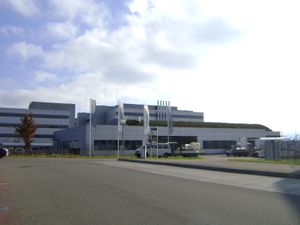 The FLORAKO radar system is used for air defense. It consists of an air surveillance radar in semiconductor technology, and a secondary radar subsystem for simulation. The 3D objective FLORAKO provides real-time information, correlated with the secondary radar data over a wide detection area. The FLORAKO constantly works with 15 Rpm rotating phased array antenna. At least one of these Command, Control, and Communications (C3) facilities is always connected to the Air Defense & Direction Center (the ADDC or air ops center) at Dübendorf and fully operational on-line on a 24/7 basis, controlling Swiss airspace. Depending on the international situation, more facilities will be manned up; in case of crisis or war (ADDC and 4 facilities operational) the coverage will be extended far beyond the Swiss boundaries. Each of these AirOps facilities is capable of making all battle management decisions in case the ADDC or the other AirOps facilities might be eliminated.[8]

Operational lifetime of this hi-tech system is guaranteed by its manufacturers for at least 25 years. The system consists of:

The radar system may eventually be completed by mobile TAFLIR (TAktische FLIeger Radars - Tactical Flight Radars). These Ground Master 200 type AN/MPQ-64 radars are a variant of the Northrop Grumman AN/TPS-75 and are deployable in areas of difficult terrain or where specific coverage is needed. Peacetime TAFLIR deployment locations are at Dübendorf and Emmen. In time of crisis or at war they can be deployed anywhere.[8] The FLORAKO is a modified version of the requirements for Swiss radars Master A and Master M from Thales. In addition to the data of the FLORAKO radar stations and the data of the mobile TAFLIR radars and civil Skyguide radar data can be fed into the FLORAKO system. The armasuisse, an interpendet branch of the MoD, operates a special equipped Pilatus PC-12 with the civil immatriculation HB-FOG to calibrate the radars, MIDS Link-16 and Radiocomunication of the FLORAKO system.