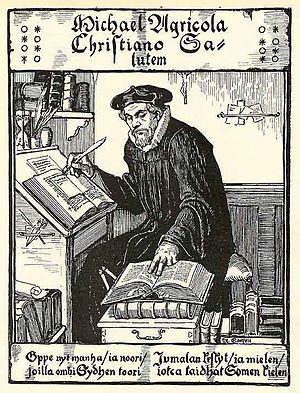 Finnish literature refers to literature written in Finland. During the European early Middle Ages, the earliest text in a Finnic language is the unique thirteenth-century Birch bark letter no. 292 from Novgorod. The earliest texts in Finland were written in Swedish or Latin during the Finnish Middle Age (ca. 1200–1523). Finnish-language literature was slowly developing from the 16th century onwards, after written Finnish was established by the Bishop and Finnish Lutheran reformer Mikael Agricola (1510–1557). He translated the New Testament into Finnish in 1548.

The early nineteenth century saw what is now Finland come under Russian rule, and a rise in nationalism was both reflected in and promoted by literary activity, which focused on folklore in Finland. Most of the significant works of the era, written in Swedish or increasingly in Finnish, revolved around achieving or maintaining a strong Finnish identity (see Karelianism).Thousands of folk poems were collected in the Suomen kansan vanhat runot ('The Ancient Poems of the Finnish People'). The most famous poetry collection is the Kalevala, published in 1835. The first novel published in Finnish was Seven Brothers (1870) by Aleksis Kivi (1834–1872). The book Meek Heritage (1919) by Frans Eemil Sillanpää (1888–1964) made him the first Finnish Nobel Prize winner. Another notable author is Väinö Linna.

Other works known worldwide include Michael the Finn and The Sultan's Renegade (known in the US as The Adventurer and The Wanderer respectively) by Mika Waltari (1908–1979). Beginning with Paavo Haavikko and Eeva-Liisa Manner, Finnish poetry in the 1950s adapted the tone and approach of T. S. Eliot and Ezra Pound. The most famous poet was Eino Leino. Timo K. Mukka (1944–1973) was the wild son of Finnish literature. Prominent writers of the 21st century include Mikko Rimminen and sci-fi authors Leena Krohn (Finlandia Prize 1992) and Johanna Sinisalo (Finlandia Prize 2000). 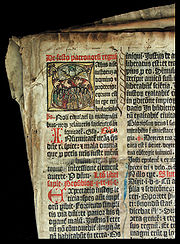 During the European early Middle Ages, what is now Finland was sparsely-populated area characterised by pre-state societies, which was, during the Middle Ages, absorbed into the emergent states of Sweden and, to a lesser extent, Russia. There is almost no Finnish-language literature from the Middle Ages or earlier; the earliest text in a Finnic language is the unique thirteenth-century Birch bark letter no. 292 from Novgorod. Important books such as The Bible and Code of Laws were only available in Latin, Swedish or a few other European languages such as French or German. The understanding of the medieval circulation of these non-Finnish writings in what is now Finland is growing in consequence of the National Library of Finland's digitisation of its medieval 'Fragmenta membranea'.[1]

Written Finnish was essentially established by the Bishop and Finnish Lutheran reformer Mikael Agricola (1510—1557) who mainly based it on western dialects. His main works were a translation of the New Testament into Finnish, a task completed in 1548, and a primer in Finnish. 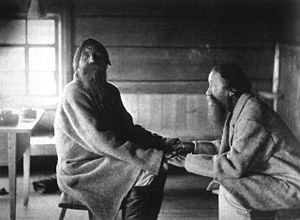 Singers of folk poetry from Karelia, 1894

The early nineteenth century saw what is now Finland come under Russian rule, and a rise in nationalism was both reflected in and promoted by literary activity. This was characterised by an explosion in the collection and study of folklore in Finland, with a particular emphasis on Finnish-language material. Much of this material is widely thought to originate in the Middle Ages, and is often thought of in Finland as medieval literature, although this is a problematic claim.[2] Much too came from Karelia, an eastern region of Finland which became in icon of Finnish identity, but was to a large extent taken by Russia in 1939–44. These folklore-collecting efforts were to a large extent co-ordinated by the Finnish Literature Society, founded in 1831. Hundreds of old folk poems, stories and their like have been collected since the 1820s into a collection among the largest in the world. Many of these have since been published as Suomen kansan vanhat runot ('The Ancient Poems of the Finnish People'), a colossal collection consisting of 27,000 pages in 33 volumes. The prominence of folklore in nineteenth-century Finland made Finnish scholarship world-leading in that area at the time; thus for example the internationally used Aarne–Thompson classification system for folktale narratives originated in Finnish scholarship.

The most famous collection of folk poetry is by far the Kalevala. Referred to as the Finnish "national epic" it is mainly credited to Elias Lönnrot, who compiled the volume. It was first published in 1835 and quickly became a symbol of Finnish nationalism. Finland was then politically controlled by Russia and had previously been part of Sweden. The Kalevala was therefore an important part of early Finnish identity. Beside the collection of lyric poems Kanteletar it has been and still is a major influence in art and music, like Jean Sibelius. It is a common misconception that Lönnrot merely "collected" pre-existing poetry. It is now widely accepted that the Kalevala represents an amalgam of loosely connected source materials, freely altered by Lönnrot to present the appearance of a unified whole. 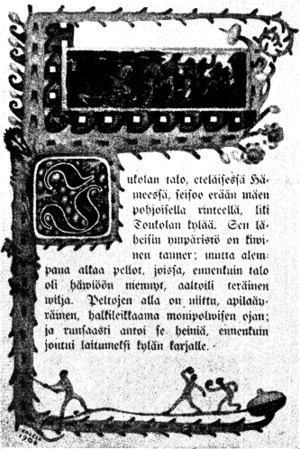 Essentially the first novel published in Finnish was Seven Brothers (1870) by Aleksis Kivi (1834–1872), still generally considered to be one of the greatest of all works of Finnish literature. As in Europe and the United States, the popularity of the novel in Finland is connected to industrialisation with many of the first Finnish novels dealing with the life of the modern middle-class or the clash of the traditional peasants with e.g. railway. In the case of Seven Brothers specifically, the theme is how uneducated residents of the countryside can survive in the developing urban civilisation and authority—a common theme in Finnish novels.

Among Finland's prominent female writers in the nineteenth century was Minna Canth (1844–1897), best known for her plays Työmiehen vaimo (The Worker's Wife) and Anna Liisa.

Finland gained its independence in 1917 and soon after a civil war broke out. As with other civil wars it was to be depicted many times in literature, as in Meek Heritage (1919) by Frans Eemil Sillanpää (1888–1964). Sillanpää was a strong leader of literature in the 1930s in Finland and was the first Finnish Nobel Prize winner. The theme was taken up by Väinö Linna, already phenomenally successful because of his novel The Unknown Soldier. In this and other cases the very strangeness of the Finnish environment and mentality have been major obstacles to international renown.

Other works known world wide include Michael the Finn and The Sultan's Renegade (known in the US as The Adventurer and The Wanderer respectively) by Mika Waltari (1908–1979). (Sinuhe) The Egyptian (1945), partially an allegory of the Second World War but located in ancient Egypt, is his best known work. Despite containing nearly 800 pages, no other book has sold so fast in Finland and the shorter English version was atop many best-seller lists in the US. One possible reason for their international success is their focus on post-war disillusionment, a feeling shared by many at the time.

Beginning with Paavo Haavikko and Eeva-Liisa Manner, Finnish poetry in the 1950s adapted the tone and level of the British and American – T. S. Eliot and Ezra Pound were major influences and widely translated. Traditionally German and especially French literature have been very well known and sometimes emulated in Finland. Paradoxically the great Russian tradition might have been less known, possibly because of a political aversion.

The most famous poet was Eino Leino – who in addition to his own writing was also a proficient translator of, among others, Dante. Otto Manninen was a master of meters and translated both The Iliad and Odyssey by Homer. After the wars Pentti Saarikoski might initially have been a counterpart of the beat generation, but being well educated, he translated Homer, Joyce and many important English and American writers.

Timo K. Mukka (1944–1973) was the wild son of Finnish literature. During a period of less than a decade in the 1960s, Mukka sprang virtually from nowhere to produce nine novels written in a lyrical prose style. His two greatest masterpieces are the novel The Song of the Children of Sibir and the novella The Dove and the Poppy – after which he ceased writing until his early death.

Prominent writers of this century include Mikko Rimminen, noted for his irreverent portrayals of life in Helsinki and winner of the 2011 Finlandia Prize. Finnish writing has also become internationally noted for its fantasy and science fiction, having gained momentum in the late twentieth century, partly through a thriving fandom scene. Leading exponents include Leena Krohn (Finlandia Prize 1992) and Johanna Sinisalo (Finlandia Prize 2000).

Even after the establishment of Finnish as the primary language of administration and education, Swedish remained important in Finland.

Johan Ludvig Runeberg (1804–1877) was the most famous Swedish-speaking writer of the nineteenth century. The opening poem Our Land (from The Tales of Ensign Stål) was dedicated as the national anthem as early as seventy years before Finnish independence. During the early 20th century, the Swedish-language modernism emerged in Finland as one of the most acclaimed literal movements in the history of the country. The best-known representative of the movement was Edith Södergran.

The most famous Swedish-language works from Finland are probably the Moomin books by writer Tove Jansson. They are also known in comic strip or cartoon forms. Jansson was, however, only one of several Swedish-language writers for children whose work can be understood as part of a wave of innovative 1960s–70s Nordic-language children's writing; another leading Finnish exponent was Irmelin Sandman Lilius.

Other prominent twentieth-century Swedish-language writers of Finland are Henrik Tikkanen and Kjell Westö, both noted for their often (semi)-autobiographical realist novels. The rise of Finnish-language fantasy and science fiction has been paralleled in Swedish, for example in the work of Johanna Holmström.