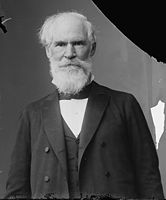 Galusha Aaron Grow (August 31, 1822 – March 31, 1907) was a prominent American politician, lawyer, writer and businessman, and was a Pennsylvania representative and Speaker of the U.S. House of Representatives from 1861 to 1863. He was defeated for reelection in 1862. He remained the last sitting House Speaker to be defeated until Tom Foley of Washington lost his seat in 1994.[1]

Grow was born Aaron Galusha Grow in Ashford, Connecticut. His given names were the suggestions of an aunt living in Vermont, who was visiting Grow's mother when he was christened: "Aaron" was the aunt's husband's name (his full name was Aaron Nichols (1764-1807)), and "Galusha" was the surname of a governor of Vermont she admired.[2] His family called him Galusha when he was growing up, and before Grow was a teenager, he had started writing his name with his given names reversed.[2] He was educated at Franklin Academy in Susquehanna County, Pennsylvania, and later at Amherst College. He studied law and was admitted to the bar in November 1847 and then began his law practice.[3]

Grow ran as a Democrat in the 1850 elections and served as a member of that party during the 32nd and 33rd Congresses and part of the 34th Congress. He switched parties in the wake of President Pierce's signing of the Kansas-Nebraska Act.[2]

He ran as a Republican for the 1856 elections and remained a member of that party for the rest of his political career.

During the 35th United States Congress, on February 5, 1858, he was physically attacked by Democrat Laurence M. Keitt in the House chambers, leading to a brawl between northerners and southerners. Keitt, offended by Grow's having stepped over to his side of the House chamber, dismissively demanded that Grow sit down, calling him a "black Republican puppy". Grow responded by telling Keitt that "No negro-driver shall crack his whip over me." Keitt became enraged and went for Grow's throat, shouting that he would "choke [him] for that". A large brawl involving approximately fifty representatives erupted on the House floor, ending only when a missed punch from Rep. Cadwallader Washburn of Wisconsin upended the hairpiece of Rep. William Barksdale of Mississippi. The embarrassed Barksdale accidentally replaced the wig backwards, causing both sides to erupt in spontaneous laughter.[4][5]

He was re-elected during the 1858 elections, and, before the end of the 36th Congress, South Carolina had voted to secede from the Union.

After Grow was again re-elected, the recently elected President Abraham Lincoln called the 37th Congress into session on July 4; in a chamber down by almost 60 from the 237 present in the previous session, Grow was nominated by Thaddeus Stevens to be the Speaker of the House, winning the job with little fanfare over the only other nominee, Francis Preston Blair, Jr..

Although events of the Civil War dominated and the First Battle of Bull Run occurred only two weeks after the 37th Congress was called into session, under Grow's speakership, several other major acts of Congress were passed and signed into law, particularly the Morrill Land-Grant College Act (passed House June 17, 1862), the Pacific Railway Act authorizing land grants to encourage the construction of the transcontinental railroad, and the Homestead Act, which in over a century resulted in the establishment of 1.6 million homesteads.

Grow, a supporter of the Radical Republicans, was defeated in his re-election bid in 1862, becoming the second sitting House Speaker in a row to lose his seat.

Grow was a delegate to the Republican National Convention in 1864 and 1868.

He moved to Houston, Texas in 1871, and that year became president of what became known as the International - Great Northern Railroad, a position he held until 1875. He then returned to Pennsylvania and the practice of law from 1875 to 1894.

Grow returned to the United States Congress as a member at-large from Pennsylvania from 1894 to 1903; was the chairman of the committee on education in the 56th Congress.

Grow resided in Glenwood, Pennsylvania from 1903 until his death at age 84. A biography of Galusha Grow, Galusha A. Grow: Father of the Homestead Law, was written by James T. Du Bois and Gertrude S. Mathews and published by Houghton Mifflin in 1917.[2]

A monument to Grow was erected in 1915 at the Susquehanna County Courthouse Complex in Montrose, Pennsylvania.[6]