Everest was largely responsible for completing the section of the Great Trigonometric Survey of India along the meridian arc from southern India extending north to Nepal, a distance of about 2,400 kilometres (1,500 mi). This survey was started by William Lambton in 1806 and it lasted for several decades.

In 1865, Mount Everest was named in his honour in the English language despite his objections[1] by the Royal Geographical Society. This enormous peak was surveyed by Everest's successor, Andrew Scott Waugh, in his role as the Surveyor-General of India. 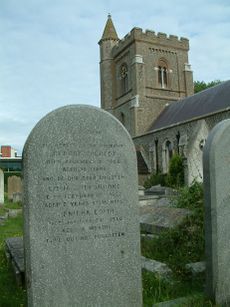 Everest was born in Gwernvale Manor, just west of Crickhowell in Powys, Wales, in 1790, and he was baptised in Greenwich.

Commissioned into the Royal Artillery, in 1818, Lt. Everest was appointed as assistant to Colonel William Lambton, who had started the Great Trigonometrical Survey of the subcontinent in 1806. On Lambton's death in 1823, Everest succeeded to the post of superintendent of the survey, and in 1830 he was appointed as the Surveyor-General of India.

Everest retired in 1843 and he returned to the UK, where he became a Fellow of the Royal Society. He was dubbed a knight in 1861, and in 1862 he was elected as the vice-president of the Royal Geographical Society. Everest died in London in 1866[2] and is buried in St Andrew's Church, Hove, near Brighton.

Everest owned a house in Mussoorie, Uttarakhand, India, for about 11 years. He purchased it, sight unseen, from General Whish. Although now virtually derelict, it still has its roof, and there have been various plans to make it into a museum at some point in time. 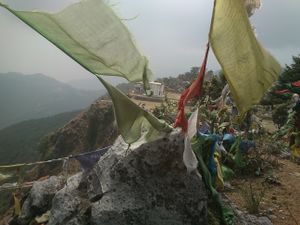 Sir George Everest's House and Laboratory, also known as Park House, is situated in Park Estate about 6 kilometres (4 mi) west of Gandhi Chowk / Library Bazaar, (West end of the Mall Road, in Mussoorie). Built in 1832 it was the home and laboratory of Sir George Everest. The house is situated in a place from where one can enjoy the panoramic view of the Doon Valley on one side and a panoramic view of the Aglar River valley and the snow-capped Himalayan range to the North.

The house is under the jurisdiction of the Tourism Department and has been long neglected. The underground water cisterns can still be seen, outside the house. These underground water tanks are quite deep and lie uncovered in the front yard, filled with litter and posing danger to humans and animals, especially during snowfall, when the ground is wet and slippery. There is some debate as to whether the cisterns may not actually be ice pits for storing ice. However, as it is known that water was scarce in the local area, many do believe the cisterns were for water. The interior has been stripped but fireplaces and the door and window frames still remain. The wooden beams that support the ceiling are mainly in good condition, although at least one major beam has broken. The house is now secured by steel grills on every door and window, reducing the amount of cow dung on the floor and graffiti on the internal walls. No one can enter the house now and hence it is clean. Now that the presence of this property is more commonly known and the access road has been improved, the walls are covered with graffiti and then periodically whitewashed clean. Recent new fencing, tree planting and the construction of a ticket booth (late 2015) indicate that soon it will cost to enter the property. The inside shows some signs of renovation several years ago - in the form of ceramic floor tiles in the kitchen and electrical switch boxes. Conservation architects at the Indian National Trust are vying for this project.[citation needed] 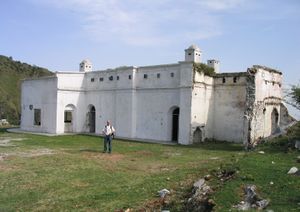 Sir George's surname is pronounced /ˈiːvrᵻst/.[5] (i.e. Eve-rest with "Eve" pronounced as in the woman's name). The mountain named after him – Mount Everest – is generally pronounced /ˈɛvərᵻst/ or /ˈɛvrᵻst/[6] (i.e. Ever-est with ever as in evermore).