Germanus of Auxerre (Welsh: Garmon Sant) (c. 378 – c. 448) was a bishop of Auxerre in Late Antique Gaul. He is best remembered for his journey to combat Pelagianism in Britain in or around 429 AD, and the records of this visit provide valuable information on the state of post-Roman British society. He also played an important part in the invention and promotion of the Cult of Saint Alban, who was unknown before the saint revealed himself to Germanus in a dream or holy vision. Germanus is venerated as a saint in both the Roman Catholic and Orthodox churches, which commemorate him on July 31.

The principal source for the events of his life is the Vita Germani, a hagiography written by Constantius of Lyon around 480, and the Passio Albani, which may possibly have been written or commissioned by Germanus. Constantius was a friend of Bishop Lupus of Troyes, who accompanied Germanus to Britain, which provided him with a link to Germanus. 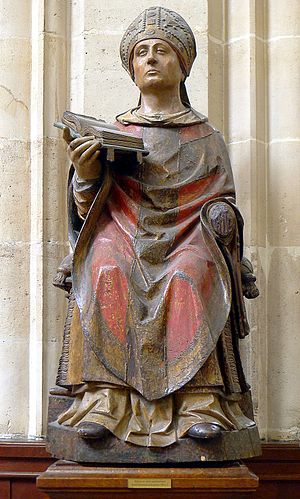 Germanus was the son of Rusticus and Germanilla, and his family was one of the noblest in Gaul in the latter portion of the fourth century. He received the very best education provided by the distinguished schools of Arles and Lyons, and then went to Rome, where he studied eloquence and civil law. He practised there before the tribunal of the prefect for some years with great success. His high birth and brilliant talents brought him into contact with the court, and he married Eustachia, a lady highly esteemed in imperial circles. The emperor sent him back to Gaul, appointing him one of the six dukes, entrusted with the government of the Gallic provinces. He resided at Auxerre.[1]

At length he incurred the displeasure of the bishop, Saint Amator by hanging hunting trophies on a certain tree, which in earlier times had been the scene of pagan worship. Amator remonstrated with him in vain. One day when the duke was absent, the bishop had the tree cut down and the trophies burnt. Fearing the anger of the duke, who wished to kill him, he fled and appealed to the prefect Julius for permission to confer the tonsure on Germain. This being granted, Amator, who felt that his own life was drawing to a close, returned. When the duke came to the church, Amator caused the doors to be barred and gave him the tonsure against his will, telling him to live as one destined to be his successor, and forthwith made him a deacon.[1]

When in a short time Amator died, Germain was unanimously chosen to fill the vacant see, being consecrated 7 July, 418. His education now served him in good stead in the government of the diocese, which he administered with great sagacity. He distributed his goods among the poor, practised great austerities, and built a large monastery dedicated to Saints Cosmas and Damian on the banks of the Yonne, whither he was wont to retire in his spare moments.[1] 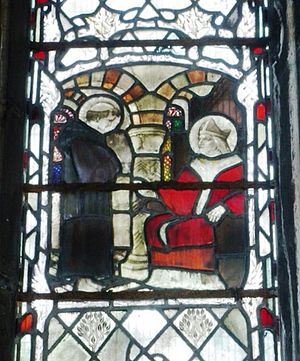 Around 429, shortly after the Romans had withdrawn from Britain, a Gaulish assembly of bishops chose Germanus and Lupus, Bishop of Troyes, to visit the island. It was alleged that Pelagianism was rife among the British clergy, led by a British bishop's son named Agricola. Germanus went to combat the threat and satisfy the Pope that the British church would not break away from the Augustinian teachings of divine grace.[2] On the way to Britain they passed through Nanterre, where Germanus noticed in the crowd which met them a young girl, whom he bade live as one espoused to Christ, and who later became St. Geneviève of Paris.[3] Germanus and Lupus confronted the British clergy at a public meeting before a huge crowd in Britain. The Pelagians were described as being 'conspicuous for riches, brilliant in dress and surrounded by a fawning multitude'. The bishops debated and, despite having no popular support, Germanus was able to defeat the Pelagians using his superior rhetorical skills.

Constantius also recounts the miraculous healing of the blind daughter of 'a man with tribunician power'.[2] This use of the word tribune may imply the existence of some form of post-Roman government system. However, in Constantius' lifetime tribune had acquired a looser definition, and often was used to indicate any military officer, whether part of the Imperial army or part of a town militia.

Germanus led the native Britons to a victory against Pictish and Saxon raiders, at a mountainous site near a river, of which Mold in North Wales is the traditional location. The enemy approaching, the former general put himself at the head of the Christians. He led them into a vale between two high mountains, and ordered his troops shout when he gave them a sign. When the Saxon pirates came near them, he cried out thrice, Alleluia, which was followed by the whole army of Britons. The sound echoed from the hills with a noise so loud that the barbarians, judging from the shout that they were facing a mighty army, flung down their arms and ran away, leaving behind their baggage and booty.[2]

It is not possible to know what impact Germanus's visit really had on Pelagianism in Britain. The link with Saint Patrick, traditionally portrayed as his pupil, is also contested in recent scholarship.

Germanus and the Cult of Saint Alban

Immediately after the debate with the Pelagians, Germanus gave thanks for his victory at the grave of Saint Alban, which was likely in some sort of tomb or basilica (some translators use the word "shrine," but this word is not in the original Latin and suggests that the cult of Saint Alban had been established before Germanus' visit to Britain, which is improbable).[4][5] However, the name and identity of this martyr was an unknown to the Britons there. That night, Germanus claimed that Saint Alban came to him in a dream, revealing his identity and the details of his martyrdom. When Germanus awoke, he had the account written down in tituli, possibly to be engraved on the walls or illustrated placards at a church site in Auxerre.[6] Historians believe that this account formed the basis of the Passio Albani, the foundational text of all information about Saint Alban.[7] Germanus then deposited some of the bones of continental saints in the basilica, and took a sample of the earth at the site of Alban's martyrdom, which still bore the marks of the martyr's blood. Germanus was therefore responsible for the creations and promotion of the cult of Saint Alban.[4][6]

Germanus may have made a second visit to Britain in the mid 430s[8][9] or mid 440s, though this is contested by some scholars[10] who suggest it may be a 'doublet' or variant version of the visit that has been mistaken as describing a different visit and erroneously included as such by Constantius, according to whom Germanus was joined by Severus, Bishop of Trier and met Elafius, described by Bede as 'a chief of that region'. Germanus is said to have cured Elafius' enfeebled son by a miracle that served to persuade the population that Gaulish Catholicism rather than Pelagianism was the true faith.

According to Nennius it is during this second visit, around 447, that Germanus is said to have condemned for incest and other crimes Guorthigern, identified with the 'Vortigern' of Welsh tradition. Vortigern ordered his daughter to bring her child to Germanus and name the bishop as its father. The scheme having failed, Vortigern was cursed by Germanus and the council of Britons, and fled into Wales followed by Germanus and the clergy. They pursued him to a castle on the river Teifi, where they fasted and prayed for three days and three nights. Finally, fire fell from heaven consuming the castle, the guilty king, and his company.[11] While the story appears to have no historical basis, it does indicate in what reverence Germanus was held in the Church in that part of the land.

He died in Ravenna while petitioning the Roman government for leniency for the citizens of Armorica,[12] against whom Aëtius had dispatched the Alans on a punitive expedition. Germanus had famously confronted Goar, the king of the Alans, so Constantius's Life relates.

Saint Germanus's tomb continues to be venerated in the church of the Abbey of Saint-Germain d'Auxerre, which although now part of municipal museum remains open for worship at stated times. There is a tradition of a panegyric on the Sunday nearest to or preceding his festival in July.

The cult of Saint Germanus of Auxerre spread in northern France, hence the church Saint-Germain l'Auxerrois facing the Louvre in Paris. His cult is clearly distinguished from that of the homonymous Saint Germanus of Paris. He is associated with the church at Charonne in the east of Paris and the cult of Saint Genevieve (Genoveva) in Nanterre to the west of the city, both situated on the late Roman road network. His journey to Britain is commemorated in his dedications at Siouville and at Saint-Germain-les-Vaux in the Cotentin (Manche).

In the 2004 edition of the Roman Martyrology, Germanus is listed under July 31. He is described as 'passing at Ravenna, a bishop who defended Britain against the Pelagian heresy and travelled to make peace for Armorica'.[13]

The former priory church at St Germans in Cornwall bears his name and was in late Saxon times the seat of a bishop. A few other churches in Cornwall are also dedicated to the saint as is the church at Germansweek in west Devon.

In Wales, Germanus is remembered as an early influence on the Celtic Church. In the current Roman Catholic liturgical calendar for Wales,[14] he is commemorated on August 3, July 31 being designated for Ignatius of Loyola. An Anglican church by Bodley explicitly dedicated to the saint of Auxerre, Anglicised as St German's, opened in Adamsdown, Cardiff in 1884.

Germanus is traditionally credited with the establishment of the Diocese of Sodor and Man on the Isle of Man, though this may have been a different man of a similar name. In the medieval tradition Germanus was frequently conflated with the Welsh Saint Garmon, who is commemorated in several North Wales placenames and church dedications, including Capel Garmon, Llanarmon, Llanarmon Dyffryn Ceiriog, Llanarmon Mynydd Mawr, Llanarmon-yn-Iâl, Llanfechain and Castle Caereinion. However, Baring-Gould and Fisher argue that Saint Garmon is a different Saint Germanus, who was born in Armorica (northern France) c. 410, visited Saint Patrick in Ireland in about 440, visited Britain in about 462, then returned to Ireland and was appointed Bishop of Man in 466, and died on the Isle of Man c. 474.[15]

And then with his stout Episcopal staff
So thoroughly whacked and banged
The heretics all, both short and tall,
They rather had been hanged.