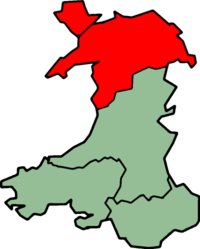 North Wales (Welsh: Gogledd Cymru) is the northernmost unofficial region of Wales. Retail, transport and educational infrastructure are centred on Wrexham, Rhyl, Colwyn Bay, Llandudno and Bangor. It is bordered to the south by the counties of Ceredigion and Powys in Mid Wales, and to the east by the counties of Shropshire in the West Midlands and Cheshire in North West England.

The southern boundary is arbitrary and its definition may depend on the use being made of the term. For example, the boundary of North Wales Police differs from the boundary of the North Wales area of the Natural Resources Wales and the North Wales Regional Transport Consortium (Taith). The historic boundary follows the pre 1996 county boundaries of Merionethshire and Denbighshire which in turn closely follows the geographic features of the river Dovey to Aran Fawddwy, then crossing the high moorlands following the watershed until reaching Cadair Berwyn, and then following the river Rhaeadr and river Tanat to the Shropshire border. Montgomeryshire is sometimes referred to as being in northern (but not North) Wales.

The region is steeped in history and was for almost a millennium known as the Kingdom of Gwynedd. The mountainous stronghold of Snowdonia formed the nucleus of that realm and would become the last redoubt of independent Wales — only overcome in 1283. To this day it remains a stronghold of the Welsh language and a centre for Welsh national and cultural identity.

The area is home to two of the three UNESCO World Heritage Sites in Wales. These are Pontcysyllte Aqueduct and canal[1] and, collectively, the Edwardian castles and town walls of the region[2] which comprise those at Caernarfon, Beaumaris,[3] Conwy and Harlech. It also shares with Powys and Ceredigion the distinction of hosting the only UNESCO Biosphere (from Man and Biosphere (MAB) Programme to promote sustainable development) reserve in Wales, namely, Biosffer Dyfi Biosphere.

The region is made up of the following administrative areas:

In addition to the six Local Authority divisions, North Wales is also divided into the following preserved counties for various ceremonial purposes:

North Wales was a European Parliament constituency until 1999. Currently, there is an electoral region for the National Assembly for Wales with the name (used, in parallel with the smaller constituencies, to elect top-up members under the Additional Member System), which covers the north-east of Wales (specifically the entire area of the former pre-1996 county of Clwyd) as well as the Northern-most coastal areas of north-western Wales; the rest of North Wales is covered by Mid and West Wales. 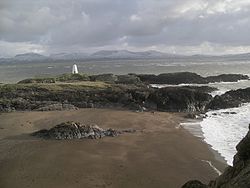 The area is mostly rural with many mountains and valleys. This, in combination with its coast (on the Irish Sea), has ensured that tourism is the principal industry. Farming, which was once the principal economic force in the area, is now much reduced in importance. The average income per capita of the local population is the lowest in the UK and much of the region has EU Objective 1 status.[4]

The eastern part of North Wales contains the most populous areas, with more than 300,000 people living in the areas around Wrexham and Deeside. Wrexham is North Wales' largest town, with a population of 63,084 in 2001. The total population of North Wales is 688,937 (2011). The majority of other settlements are along the coast, including some popular resort towns, such as Rhyl, Llandudno and Pwllheli. The A55 road links these towns to cities like Manchester, Liverpool and Birmingham and the port of Holyhead for ferries to Ireland; few routes connect North Wales with South Wales. There are two cathedral cities – Bangor and St. Asaph – and a number of mediaeval castles (e.g., Criccieth, Dolbadarn, Dolwyddelan, Harlech, Caernarfon Castle, Beaumaris, Conwy) The area of North Wales is about 6,172 square kilometres, making it slightly larger than the country of Brunei.

North Wales has a very diverse and complex geology with Precambrian schists along the Menai Strait and the great Cambrian dome behind Harlech and underlying much of western Snowdonia. In the Ordovician period much volcanism deposited a range of minerals and rocks over the north western parts of Gwynedd whilst to the east of the River Conwy lies a large area of upland rolling hills underlain by the Silurian mudstones and grits comprising the Denbigh and Migneint Moors. To the east, around Llangollen, to the north on Halkyn Mountain and the Great Orme and in eastern Anglesey are beds of limestone from which metals have been mined since pre-Roman times. Added to all this are the complexities posed by Parys Mountain and the outcrops of unusual minerals such as Jasper and Mona Marble which make the area of special interest to geologists.

North Wales has a distinct regional identity. Its dialect of the Welsh language differs from that of other regions such as South Wales in some ways: for example llefrith is used in most of the North instead of llaeth for "milk"; a simple sentence such as go upstairs now might be Dos i fyny'r grisiau rŵan in North Wales, and Cer lan y stâr nawr in South Wales. Colloquially, a person from North Wales (especially one who speaks with this dialect or accent) is known as a North Walian, or a Gog (from the Welsh gogledd, meaning "north"). Areas close to the border with Cheshire can have Scouse accents of English, and along the coast Manchester accents are common.

Two daily newspapers are published in the region. The region-wide "North Wales edition" of the Daily Post, based at Trinity Mirror's offices in Llandudno Junction, is distributed from Monday to Saturday, whilst The Leader (formerly the Evening Leader) publishes three editions for Wrexham, Chester and Flintshire and is based at the headquarters of NWN Media in Mold.

A weekly Welsh-language newspaper, Y Cymro is published each week by the Cambrian News from its Porthmadog office alongside two localised Welsh titles, Y Cyfnod (Bala) and Y Dydd (Dolgellau). Yr Herald Gymraeg is distributed by Trinity Mirror as a pull-out section in the Wednesday edition of the Daily Post. There are also 24 Papurau Bro (area papers) providing community news and generally published each month.

A number of hyper-local websites in the area provide locally sourced news online. In Conwy county, BaeColwyn.com gives Welsh language coverage of the Colywn Bay area since 2011 and AbergelePost.com has been serving the Abergele area since 2010. Wrexham.com is a full-time operation covering Wrexham and the surrounding area, and is based at offices in Wrexham town centre. A full-time citizen led online news site Deeside.com started in early 2013 and covers Connah's Quay, Mancot, Pentre, Shotton, Queensferry, Sealand, Broughton, Hawarden, Ewloe, Sandycroft and parts of Saltney.

Although no BBC local radio stations exist in Wales, the Corporation's national services BBC Radio Wales and BBC Radio Cymru cover the region from their broadcasting centres in Bangor, and Wrexham. The Bangor studios produce a large amount of Radio Cymru programmes with some music and feature output for Radio Wales originating from Wrexham.

Three commercial radio stations serve the area — Capital North West and Wales broadcasts local breakfast and drivetime programming for Wrexham, Flintshire, Denbighshire and Conwy county as well as Cheshire and the Wirral with a Welsh language opt-out service for the former Coast FM area on 96.3 FM. Capital Cymru airs an extended local programming service, predominantly in the Welsh language, for Gwynedd and Anglesey. Across the entire region, Heart North Wales also airs local peak-time programming in English, including an extended news programme on weeknights. All three stations broadcast from studios in Gwersyllt on the outskirts of Wrexham.

Towards the western side of North Wales, local hills mean national BBC FM coverage can be quite poor, often suffering interference from Irish stations from the west.

News coverage of North Wales is generally provided within the BBC's Wales Today, Newyddion and Ffeil programmes (the latter two broadcast on S4C) and on ITV's ITV News Cymru Wales. BBC Cymru Wales news teams are based at the Corporation's Bangor, Wrexham and Mold studios while ITV Cymru Wales runs a newsroom in Colwyn Bay.

S4C has an administrative office in Caernarfon, where a cluster of independent production companies are also based or partly based including Rondo Media, Cwmni Da, Antena, Owain Roberts Animations and Tinopolis.

Wrexham F.C. play in the English football league system; having been a member of the Football League for over 80 years, in 2008 they were relegated into the Conference National for the first time in their existence. They remain the highest ranked team in the region, and play at the Racecourse Ground in Wrexham and train at Colliers Park, Gresford. Colwyn Bay F.C. also play in the English pyramid at Conference North level.

There are a number of teams including Bangor City who have appeared in UEFA competitions, playing within the semi-professional domestic leagues the Welsh Premier League and the Cymru Alliance.

Due to the close proximity of North Wales to the North West of England, support for the English clubs of Liverpool F.C., Everton F.C. and Manchester United has been historically strong.

Wales was represented in the European Super League by Crusaders Rugby League, they re-located to Wrexham for the 2010 season from south Wales. They played at the Racecourse Ground and trained at Stansty Park both in Wrexham before folding in 2011. They have now been replaced by the Championship 1 side, North Wales Crusaders.

North Wales has its own amateur league, the North Wales Championship.

In September 2008 it was announced by the Welsh Rugby Union that a development team based in North Wales would be created, with a long-term goal of becoming the fifth Welsh teamin the Celtic League.[5] It was envisaged that this would both help the growth of the game in the area, and provide a larger pool of players for the Welsh national team to be selected from.[6] 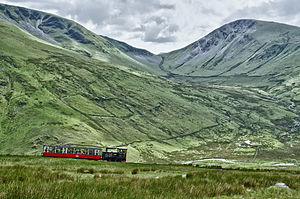 In 2000, The Wales Tourist Board tourist identified the top 10 most visited attractions in the region.[7] They included: