A High Sheriff is a ceremonial officer for each shrieval county of England and Wales and Northern Ireland or the chief sheriff of a number of paid sheriffs in U.S. states who outranks and commands the others in their court-related functions.

The office existed in what is now the Republic of Ireland but was abolished there in 1926. 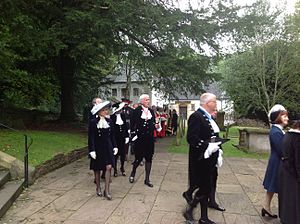 In England, Wales and Northern Ireland the high sheriff (or in the City of London the sheriffs) is/are theoretically the sovereign's judicial representative in the county,[citation needed] while the Lord Lieutenant is the sovereign's personal representative. Their jurisdictions, the "shrieval counties", are no longer co-terminous with administrative areas, representing a mix between the ancient counties and more recent local authority areas.[citation needed] The post contrasts with that of sheriff in Scotland, who is a judge sitting in a sheriff court.

The word "sheriff" is a contraction of the term "shire reeve". The term, from the Old English scīrgerefa, designated a royal official responsible for keeping the peace (a "reeve") throughout a shire or county on behalf of the king.[1][2] The term was preserved in England notwithstanding the Norman Conquest. The office of sheriff had its origins in the 10th century; the office reached the height of its power under the Norman kings. While the sheriffs originally had been men of great standing at court, the thirteenth century saw a process whereby the office devolved on significant men within each county, usually landowners.[3] The Provisions of Oxford (1258) established a yearly tenure of office. The appointments and duties of the sheriffs in England and Wales were redefined by the Sheriffs Act 1887.[4] Under the provisions of the Local Government Act 1972, on 1 April 1974 the office previously known as sheriff was retitled "high sheriff".[5]

The serving high sheriff submits a list of names of possible future high sheriffs to a tribunal which chooses three names to put to the Sovereign. The nomination is made on 12 November every year and the term of office runs from 25 March, the first day of the year until 1751. No person may be appointed twice in three years, unless there is no other suitable person in the county.[citation needed]

The Sheriffs Act 1887 as amended provides that sheriffs should be nominated on 12 November (Martinmas), or the Monday following if it falls on a Sunday, by any two or more of the Chancellor of the Exchequer, the Lord President of the Council, and the Lord Chief Justice of England; other members of Her Majesty's Most Honourable Privy Council; and any two or more judges of Her Majesty's High Court.[6] These amendments were in 1998, the Chancellor of the Exchequer was granted full entitlement not merely conditional entitlement if there is no Lord High Treasurer — since the Treasurership is by constitutional convention always placed into commission, and in 2006 the Lord Chancellor was removed as a nominating officer through the operation of the Constitutional Reform Act 2005.[7]

These officers nominate three candidates for each county in England and Wales (with the exception of Cornwall, Merseyside, Greater Manchester and Lancashire), which are enrolled on a parchment by the Queen's Remembrancer.[8]

Eligibility for nomination and appointment as high sheriff under the Sheriffs Act 1887 excludes peers of Parliament, members of the House of Commons, commissioners or officers of Her Majesty's Revenue and Customs, officers of the Post Office and officers of the Navy, Army or Royal Air Force on full pay, clergymen (whether beneficed or not) and barristers or solicitors in actual practice.[citation needed]

The practice of "pricking" is an ancient custom used to appoint the high sheriffs of England and Wales.

Certain eligible persons (High Court Judges and the Privy Council) nominate candidates for each county shrievalty, one of whom is chosen for each by the Sovereign. In practice, the first name on the list is nowadays always the one chosen; the second and third names tend to become sheriffs in succeeding years, barring incapacity or death. The Sovereign signifies assent by pricking (i.e., piercing) the document with a silver bodkin by the relevant name for each county, and signs the parchment when complete. The parchment for the Duchy of Lancaster is known as the "Lites", and the ceremony of selection known as "Pricking the Lites".[10] The term "lites", meaning "list", was once reserved for Yorkshire;[11] the date at which the name was transferred to Lancashire is unknown.[according to whom?] [12] The Lites is used for the three ceremonial counties that fall wholly or partially within the boundaries of the historic county palatine of Lancaster (an administrative county until 1 April 1974): Lancashire, Greater Manchester, and Merseyside.[10]

The practice is believed to date back to a year in the reign of Elizabeth I, when, lacking a pen, she decided to use her bodkin to mark the name instead. By contrast, Lord Campbell stated, perhaps without intention of publication, in February 1847, "[it began] in ancient times, sir, when sovereigns did not know how to write their names." while acquiring a prick and a signature from Queen Victoria as Prince Albert asked him when the custom began.[13][14]

The Sheriffs (Ireland) Act 1920 restricted the duties of the High Sheriff to summoning of the county grand jury and attending the judge at assizes.[15] In the Irish Free State the Courts of Justice Act 1924 abolished the grand jury and the assizes;[15] and the office of High Sheriff was formally abolished by the Court Officers Act 1926.[16] The office continues to exist in Northern Ireland.

The declaration a person must make before taking the office of high sheriff is contained in the second schedule of the Sheriffs Act 1887.[17] Additional words are inserted in the case of the Duchy of Cornwall for example the declaration includes: "do solemnly declare that I will well and truly serve the Queen’s Majesty and also his Royal Highness Duke of Cornwall".[17]

Contemporary high sheriffs have few genuine responsibilities and their functions are largely representational:[18][19]

Theoretical responsibilities include the well-being and protection of High Court judges, and attending them in court; and the maintenance of the loyalty of subjects to the Crown.[20] However, most of the high sheriff's work is delegated (for example, the local police now protect judges and courts) so that in effect the post of high sheriff is essentially ceremonial.

The high sheriff was traditionally responsible for the maintenance of law and order within the county, although most of these duties are now delegated to the professional Chief Constable of Police.[19] As a result of its close links with law and order the position is frequently awarded to people with an association with law enforcement (former police officers, lawyers, magistrates, judges). The high sheriff was originally allowed to kill suspects resisting arrest; this was still legal in the 17th century. Edward Coke noted that when the high sheriff employed constables to assist in his duties the law was also extended to them.[21]

Under the provisions of the Sheriffs Act 1887, if a sheriff finds any resistance in the execution of a writ he shall "take with him the power of the county" (known as posse comitatus), and shall go in proper person to do execution, and may arrest the resisters and commit them to prison, and every such resister shall be guilty of a misdemeanor.[22]

The nomination of sheriffs in the counties of Wales was first vested by statute in the Council of Wales and the Marches and the Welsh justices under Henry VIII. With the abolition of the Council in 1689, the power of nomination was transferred to the justices of the Court of Great Sessions in Wales. When this court was abolished in 1830, its rights were in turn transferred to the courts of King's Bench, Exchequer, and Commons Pleas.[32] Finally, by an Act of Parliament of 1845, the nomination and appointment of sheriffs in Wales was made identical to that in England.[26]

The position of high sheriff in the United States generally denotes the superior sheriff in a state, or the head of a statewide sheriff's department. Such a position exists in Rhode Island (Executive High Sheriff),[33] and Hawaii. In New Hampshire, the ten high sheriffs are the senior law enforcement officers of each county, and have police powers throughout the state.[34]

The New York City Sheriff functions as a high sheriff over the five counties/boroughs - each of which contains an subordinate undersheriff in charge.[35]