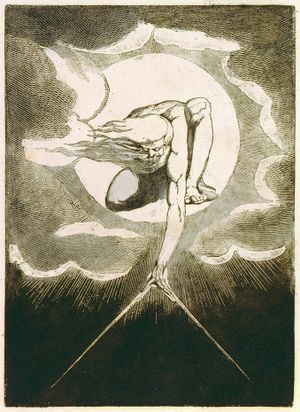 The Ancient of Days in Europe a Prophecy by William Blake, 1795, copy H

Houghton Library, on the south side of Harvard Yard adjacent to Widener Library, is Harvard University's primary repository for rare books and manuscripts. It is part of the Harvard College Library, the library system of Harvard's Faculty of Arts and Sciences.

Harvard's first special collections library began as the Treasure Room of Gore Hall in 1908.[1] The Treasure Room moved to the newly built Widener Library in 1915. In 1938, looking to supply Harvard's most valuable holdings with more space and improved storage conditions, Harvard College Librarian Keyes DeWitt Metcalf made a series of proposals which eventually led to the creation of Houghton Library, Lamont Library, and the New England Deposit Library. Funding for Houghton was raised privately, with the largest portion coming from Arthur A. Houghton Jr., in the form of stock in Corning Glass Works. Construction was largely completed by the fall of 1941, and the library opened on February 28, 1942.

Houghton also holds the letters of Colonel Robert Gould Shaw, who commanded the 54th Massachusetts during the Civil War, and was killed during the assault on Fort Wagner.