Hydroelectricity in the United Kingdom 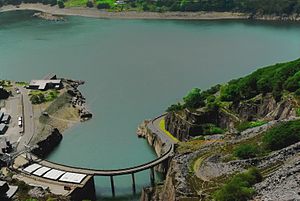 The Dinorwig Power Station lower reservoir, a 1,800 MW pumped-storage hydroelectric scheme, in north Wales, and the largest hydroelectric power station in the UK 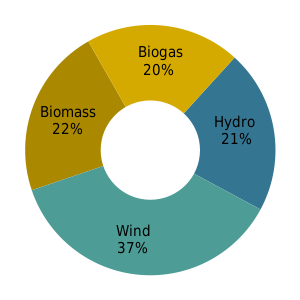 The potential for further practical and viable hydroelectricity power stations in the UK is estimated to be in the region of 146 to 248 MW for England and Wales,[4] and up to 2,593 MW for Scotland.[5] However, by the very nature of the remote and rugged geographic locations of some of these potential sites, in national Parks or other areas of outstanding natural beauty, it is likely that environmental concerns would mean that a large number of them would be deemed not to be suitable, or could not be developed to their full theoretical potential.

Interest in hydropower in the UK has been renewed in recent years due to new UK and EU targets for reductions in Carbon emissions and the promotion of renewable energy power generation through commercial incentives such as the Renewable Obligation Certificate scheme (ROCs) and Feed in tariffs (FITs). Prior to such schemes, previous studies to assess the available hydro resources in the UK had discounted a large number of sites for reasons of poor economic or technological viability, but more recent studies in 2008 and 2010 by the British Hydro Association (BHA) have identified a larger number of viable sites due to improvements in the available technology and the economic of ROCs and FITSs[4][5]

Schemes up to 50 kW are eligible for FITs, and schemes over 5 MW are eligible for ROCs. Schemes between 50 kW and 5 MW can choose between either. The UK Government’s National Renewable Energy Action Plan of July 2010 envisages between 40 MW and 50 MW a year of new hydropower schemes being installed annually up to 2020. The most recent feedback for new hydro schemes is for 2009, and approximately 15 MW of new hydropower was installed during that year. It therefore remains to be seen if the ROC and FIT incentives will be enough for these ambitious targets to be met.[2]