Interceptor body armor (IBA) is a bullet-resistant vest that was used by the United States Armed Forces from the late 1990s to the late 2000s, still seeing use as of the early 2010s. The Interceptor Body Armor design replaced the older standardized fragmentation protective Personnel Armor System for Ground Troops (PASGT) body armor system, introduced in the early 1980s.

The Interceptor body armor system consists of an Outer Tactical Vest (OTV) and two Small Arms Protective Insert (SAPI) ballistic plates. The OTV features a carrier shell, and three main ballistic panel inserts (left and right side panels, and a rear back panel), which are made with a finely woven Kevlar KM2 fiber. These two parts of the vest are both bullet and heat resistant. The soft ballistic panels are produced in five different sizes (S-XXL), which are installed into their respective pocket on the OTV carrier shell.

The Interceptor armor also has a PALS webbing grid on the front of the vest which accommodate the same type of pockets used in the Modular Lightweight Load-carrying Equipment (MOLLE) backpack/carry vest system. This allows a soldier to tailor-fit his MOLLE and body armor system. While not specifically designed for it, the loops can also easily attach All-purpose Lightweight Individual Carrying Equipment (ALICE)-based equipment, as well as many pieces of civilian-made tactical gear, and also features a large handle on the back just below the collar which can be used to drag a wounded person to safety in an emergency.

Due to the increased dangers of improvised explosive devices, a newer version of the vital plates and components have been developed. The Enhanced Small Arms Protective Inserts (ESAPIs) and Enhanced Side Ballistic Inserts (ESBIs) have become available, along with the Deltoid and Axillary Protector System (DAPS). These new systems are becoming the standard for forward deployed troops. The E-SAPI plates offer increased protection from 7.62mm armor-piercing ammunition. The ESBIs is an attachable MOLLE ballistic panel with a pouch for a 8x6 side-SAPI, for protection of the side of the torso/under the arm. DAPS consists of two ambidextrous modular components, the Deltoid (upper arm) Protector and the Axillary (under arm) Protector, and provide for additional protection from fragmentary and projectiles to the upper arm and underarm areas. With the Interceptor body armor, E-SAPI plates (10.9 pounds), ESBIs (7.75 pounds), DAPS (5.03 pounds) and with the neck, throat and groin protectors installed the armor is significantly heavier at 33.1 pounds (15 kg).

Mannequin of a U.S. Marine wearing a coyote-brown OTV and an additional corporal full protection called "Quadgard IV". This kind of protection was used by turret gunners during the Iraq War, to protect them against small arms fire and fragmentation.

To increase overall protection, separate accessories can be added to the OTV:

With the need of additional accessories to protect troops, some were produced for the ground:

The Interceptor vest was tested to stop a 9×19mm 124-grain FMJ bullet at 1,400 ft/s with minimal backface deformation, and it has a V-50 of roughly 1,525 ft/s. This means that the bullet in question must travel faster than 1,525 ft/s for it to have more than a 50% chance of penetration. (An unlikely prospect, given the muzzle velocity of a typical 9mm handgun or submachine gun) The Interceptor cannot, however, be called a Level III-A vest, since military standards do not require protection against heavy .44 Magnum ammunition. The vest will stop lower velocity fragments and has removable neck, throat, shoulder, extended back and groin protection.

Additionally, two ceramic plates may be added to the front and back of the vest, with each capable of stopping up to three hits from the round marked on the plate. For SAPI, this is a caliber of up to 7.62×51mm M80 FMJ. For ESAPI, this is a caliber of up to 30-06 M2 AP. [3] This performance is only guaranteed when backed by the Interceptor vest, or any other soft armor which meets military requirements for protection. SAPI and ESAPI are the most technically advanced body armor fielded by the U.S. military, and are constructed of boron carbide ceramic with a Spectra shield backing that breaks down projectiles and halts their momentum. 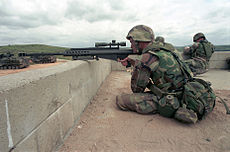 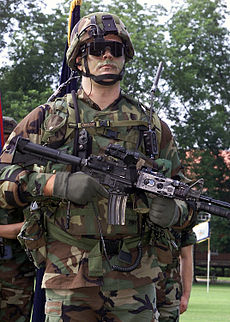 The Interceptor vest comes in a number of fabric variants. Camouflage patterns include:

The original Interceptor Outer Tactical Vest (OTV) variant first began to be issued to the U.S. Armed Forces in the early 2000s, and the first OTV carriers were first produced in the Woodland camouflage pattern (one initial contractor for the early OTVs was Point Blank, Inc). Quickly, a coyote-brown variant was made for the USMC. Marines used OTV in both woodland and coyote-brown camouflages in Iraq and Afghanistan. In the U.S. Army, the Woodland camouflage pattern was then superseded by the 3-color Desert Combat pattern, followed by the Universal Camouflage Pattern.

On May 10, 2006, the U.S. Army announced it was holding an open competition for companies to design an entirely new generation of body armor "to improve on and replace" the Interceptor. The Army said it wanted ideas from companies by May 31. Congressional investigators reportedly reviewed the Pentagon's entire body armor program, including the Interceptor vest. Investigators expressed concern that the vests might not be adequate to protect troops.[6]

Aside from replacing the SAPI vital plates with the improved E-SAPI plates, the body armor vests have also been redesigned, improved and enhanced with the introduction of the Improved Outer Tactical Vest, or "IOTV" (which began to be issued to ground combat units in late 2007), in the U.S. Army.

Not adapted for the mountainous environment of Afghanistan, the Modular Tactical Vest (MTV) was replaced by the Scalable Plate Carrier (SPC), a lighter alternative, which is their primary body armor system for Afghanistan.

Since January 2009, the U.S. Marine Corps is seeking for replacements for both MTV and SPC that are commonly issued. The MTV has received top ratings by many U.S. Marines; although a few Marines have complained about minor elements of it and an updated version will soon be released which deals with these elements.[8] Improved Modular Tactical Vest (IMTV) and Improved Scalable Plate Carrier (ISPC) are the new models. "The IMTV will be the main body armor system for Marines, the Corps plans to order about 70,000 of the improved plate carriers, far more than the estimated 10,000 to 14,000 plate carriers in use today".[9]

Body armor is always a compromise: mobility and comfort (and thus speed and stamina) are inevitably sacrificed to some degree when greater protection is achieved. This is a point of contention in the U.S. armed forces, with some favoring less armor in order to maintain mobility and others wanting as much protection as is practical. Troops who primarily ride in vehicles generally want the highest practical level of protection from IED's and ambushes, while dismounted infantry often make the case that impaired mobility can prove just as fatal as inadequate armor.

The debate is especially valid in the Iraq war, when comparing lightly equipped insurgents with U.S. troops routinely burdened with upwards of 100 lbs. of weapons, ammunition, armor, food, water, and other assorted equipment. Many troops have complained that under such conditions, they are simply unable to pursue their guerrilla opponents. Side armor has been sent to Iraq in increasing amounts, but many troops do not want to wear it because it adds 10 lb to the 16 lb vest and they say the added weight could decrease mobility and get them killed in certain combat scenarios.[10] 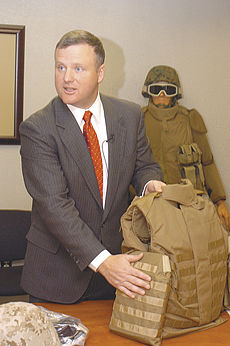 A retired U.S. Marine officer showcases the Interceptor with additional side SAPI plates and neck protector in 2005, with a set of full-body armor in the background.

On 4 May 2005 the U.S. Marine Corps recalled 5,277 Interceptor combat vests made by DHB's Point Blank unit after news reports about the vests' inability to stop 9mm bullets. In November, 2005, the Marine Corps ordered 10,342 Interceptor Outer Tactical Vests pulled from the operating forces after media reports indicated some samples tested by the manufacturer and by the U.S. Army's Aberdeen Proving Ground in Maryland failed to fully comply with ballistics standards.

A U.S. Marine Corps forensic study obtained by DefenseWatch slams the Interceptor OTV body armor system. "As many as 42% of the Marine casualties who died from isolated torso injuries could have been prevented with improved protection in the areas surrounding the plated areas of the vest. Nearly 23% might have benefited from protection along the mid-axillary line of the lateral chest. Another 15% died from impacts through the unprotected shoulder and upper arm," the report says.[11]

Private purchase of commercial body armor is not authorized by the U.S. Army. A spokesman voiced concerns in 2004 about armor that had not been "tested, certified or approved" by the Army.[5] In 2005, the DoD under severe pressure from Congress after the recalls, authorized a one-time $1,000 reimbursement to soldiers who had purchased civilian body armor and other gear.[12] In 2006 they gave orders not to wear anything but military issued body armor because of fears that inadequate armor could be purchased, mainly body armor that had inadequate blunt force trauma protection.[13]