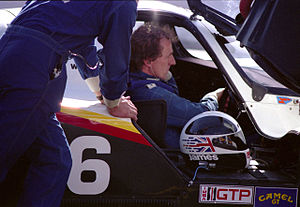 He began his career in the European F3. In 1982 he was the Eddie Jordan Racing team's primary driver, but in 1983 he went back to the European F3. He debuted in the British Touring Car Championship in 1989 at the Oulton Park circuit in March that year. He finished second overall in the British Touring Car Championship that year behind the winner John Cleland. He won Class B that year.

In 1987, Weaver joined Dyson Racing, for whom he drove for twenty years. He resulted IMSA GT Championship runner-up in 1995, won the 1998 United States Road Racing Championship and the 2000 and 2001 Rolex Sports Car Series, and collected two vice-championships in the 2004 and 2006 American Le Mans Series.