From Infogalactic: the planetary knowledge core
Jump to: navigation, search
For other uses, see Jiujiang (disambiguation).

Jiujiang (Chinese: 九江), formerly transliterated Kiukiang[1] or Kew Keang, is a prefecture-level city located on the southern shores of the Yangtze River in northwest Jiangxi Province, People's Republic of China. It is the second-largest prefecture-level city in Jiangxi province[citation needed], after the provincial capital Nanchang. Jiujiang literally means "nine rivers".

Its population was 4,728,778 inhabitants at the 2010 census whom 704,986 in the built up area made of 2 urban districts (Xunyang and Lushan). In 2007, the city is named China's top ten livable cities by Chinese Cities Brand Value Report, which was released at 2007 Beijing Summit of China Cities Forum.[2]

There are 235 towns and 11 sub-district offices.

File:JJmtains.jpg
The mountain range to the South of Jiujiang

In ancient times it was told that nine rivers converged near where Jiujiang sprang up to become Jiangxi's main water port today. During the Xia through the Shang Dynasties Jiujiang was a capital of several states. In the Spring & Autumn Period (770-476 BCE) Jiujiang bordered between the states of Wu (downstream, to the east) and Chu (upstream, to the west). Tao Yuanming (365-429 CE) a famous Chinese philosopher lived at the base of Lushan. He was once appointed magistrate of nearby Pengze County and after 83 days resigned due to the politics involved in administering justice. He retired back to his village to pen an essay called "Peach Blossom Spring". In 757, Li Po (701-762 CE) was implicated in An-Shi disturbances and imprisoned at Jiujiang. Bai Juyi (772-846 CE) wrote a poem called "Lute Song", which is about his sadness and isolation of forced exile as a middle rank official to reside in such a small town. In the 13th century Zhu Xi was a Confucian philosopher who practiced at the White Deer Grotto Academy, on Lushan's eastern flanks.

Jiujiang has also been known as Jiangzhou and Xunyang in former times. During the Qin Dynasty (265-420 CE) it was known as Sin Yang, the Liang dynasty (502-557 CE) it was called Jiang Zhou. The Sui Dynasty saw its name as Jiujiang and the Song Dynasty (960-1127) called it Ting Jiang. The Ming dynasty (1368–1644), gave it Jiujiang which has retained its name to this day. It was a Taiping stronghold for five years (1850–64) after they devastated the town to only leave one street with buildings intact. 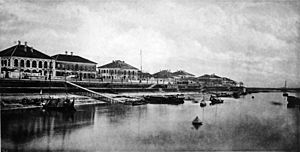 The Jiujiang waterfront circa 1873.

A member of Lord Elgin's committee arriving in 1858 to survey Chinese ports for treaty status noted: "We found it to the last degree deplorable." A single dilapidated street, composed only of a few mean shops, was all that existed of this once thriving populous city. The remainder of the vast area composed within its massive walls 9-10 kilometers in circumference, contained nothing but ruins, weeds and kitchen gardens. After becoming an open treaty port in 1862, it was exporting Jiangxi's vast rice crop. In 1904, more than 160,000 kilos of opium were moved through its customs house.

It became one of the three centers of the tea trade in China along with Hankou and Fuzhou. The Russians had two brick tea producing factories, but ceased operations after 1917. The British surrendered their concession in 1927 after being robbed and its Chinese workers mutineered their posts to the marauding crowds. An economic recession had set in over the decades as Indian and Chelonian teas made for greater competition. A military advance was being staged upriver in Wuhan by the Guomindang in 1927 and all the remaining expatriate community fled on British and American warships towards safer waters of Shanghai, to never return.

Jiujiang languished as a port and much of its export trade was siphoned off with the connecting Nanchang to coastal rail lines built in 1936-37. Until 1949 Jiujiang had very little industry except for local handicrafts. Manufacturing is Jiujiang's backbone today with auto, machinery, petrochemical, shipbuilding and textiles as its cornerstones. After the completion of the Yangtze River Bridge in 1992 and the Beijing to Kowloon (Hong Kong) - Wuhan to Shanghai rail system laid, a convenient ground corridor was provided and a regional airport now serves most of China's capital cities.

The city suffered only slight damage in the 2005 Ruichang earthquake, but there were several deaths reported in outlying areas.

The city administers a total population of approximately 4,728,778 at the 2010 census of whom approximately 704,986 are urban living in the built-up area.[3] The population density is 249 per km². Han Chinese make up 99.8% of the population, but registered residents include representatives of 25 minority nationalities, including six with a local population of more than 100: Hui, Miao, Zhuang, Tujia, and She.

Unlike the Gan dialects typical of Jiangxi, the local speech of Jiujiang is a variety of Mandarin.

Jiujiang is twinned with:

Picturesque Mount Lu, located in the south of the urban center, is listed as a world heritage site.

Just downriver from Jiujiang is Hukou where the Yangtze River and waters of Boyang Lake converge with an abrupt color change. People have been coming here for centuries to listen to the stone-bell sound resonating from the cliffs overlooking this spot. A few theories are provided why this rare geographical phenomenon happens Li Dao Yuan writes from the Northern Wei period (386-534), is due to the hill having a bell-shaped appearance and hollow inside, thus providing the sound when struck or water lapping within the limestone nooks and fissures around its base, as famous litterateur from the same time Su Shui discovered. Su Dong Po also did three trips around its perimeter, before settling on this last explanation for its unique sound also. Many Chinese literati's have left more than twenty calligraphy masterpieces carved upon its rocks, with some dating back to the Tang dynasty (618-907 CE).

南山公园 (Nanshan Gongyuan) Nanshan Park Completed in early 2013, this brand new pagoda and surrounding park are a relaxing get away from the center of the city. The pagoda itself should be open rather soon (as of March 2013 residents are not permitted to enter the pagoda), and the park itself is covered in flora and lights up the Jiujiang sky at night.