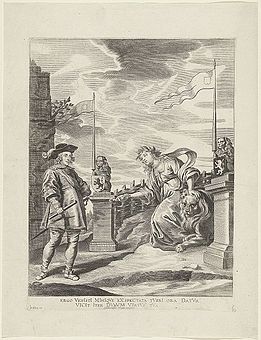 Ferdinand Receives the Keys of the City from the Virgin of Ghent, print after a painting made by Antoon van den Heuvel for the Joyous Entry by the Cardinal-Infante Ferdinand into Ghent in 1635 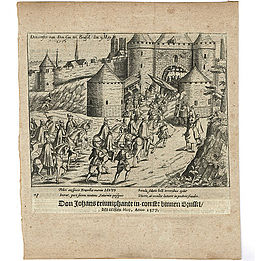 The Joyous Entry of John of Austria into Brussels, 1 May 1577. Print from 'The Wars of Nassau' by W. Baudartius, Amsterdam 1616.

A Joyous Entry (Blijde Intrede, Blijde Inkomst, or Blijde Intocht in Dutch, Joyeuse Entrée in French) was a local name used for the royal entry — the first official peaceable visit of a reigning monarch, prince, duke or governor into a city — mainly in the Duchy of Brabant or the County of Flanders and occasionally in France, Luxembourg or Hungary, usually coinciding with recognition by the monarch of the rights or privileges to the city, and sometimes accompanied by an extension of them.[1][2][3][4]

A Joyous Entry is a particular form of, and title for, the general phenomenon of ceremonial entries into cities by rulers or their representatives, which were celebrated with enormous pageantry and festivities throughout Europe from at least the late Middle Ages on. The leading artists available designed temporary decorated constructions such as triumphal arches, groups of musicians and actors performed on stands at which the procession halted, the houses on the processional route decorated themselves with hangings, flowers were thrown, and fountains flowed with wine. The custom began in the Middle Ages and continued until the French Revolution, although less often in Protestant counties after the Reformation. A formal first visit to a city by an inheritor of the throne of Belgium upon his accession and since 1900 for a crown prince upon his marriage, is still referred to as a "Joyous Entry", a reminder of this tradition of the rule of law.[5][6]

In the Duchy of Brabant the term Joyous Entry was also applied to the charter of liberties that a new ruler was obliged to swear to uphold upon their formal first reception, dating back to the Joyous Entry of 1356. One of the functions of the Council of Brabant was to ensure that new legislation did not contravene or abrogate the liberties established in the Joyous Entry.[7]