listen); French: Louvain, pronounced: [luvɛ̃], often used in English) is the capital of the province of Flemish Brabant in Belgium. It is located about 25 kilometres (16 miles) east of Brussels, close to other neighbouring towns such as Mechelen, Aarschot, Tienen, and Wavre. The municipality itself comprises the historical city of Leuven and the former municipalities of Heverlee, Kessel-Lo, a part of Korbeek-Lo, Wilsele and Wijgmaal.

It is home to Anheuser-Busch InBev, the world's largest brewing group and one of the five largest consumer-goods companies in the world; and to the Katholieke Universiteit Leuven, the largest and oldest university of the Low Countries and the oldest Catholic university still in existence.[2] It is also home to the UZ Leuven, one of the largest hospitals of Europe. 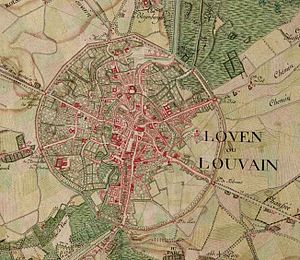 Leuven on the Ferraris map (around 1775) 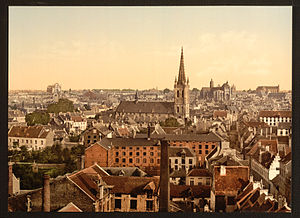 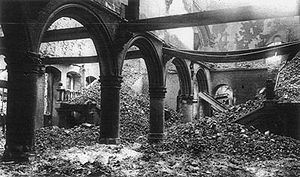 Destruction of the university library, 1914

The earliest mention of Leuven ("Loven") is from 891, when a Viking army was defeated by the Frankish king Arnulf of Carinthia (see: Battle of Leuven). According to a legend the city's red and white arms depict the blood-stained shores of the river Dyle after this battle.

Situated beside this river, and near to the stronghold of the Dukes of Brabant, Leuven became the most important centre of trade in the duchy between the 11th and 14th centuries. A token of its former importance as a centre of cloth manufacture is shown in that ordinary linen cloth is known in late-14th-century and 15th-century texts as lewyn (other spellings: Leuwyn, Levyne, Lewan(e), Lovanium, Louvain).[3]

In the 15th century a new golden era began with the founding of what is now the largest and oldest university in the Low Countries, the Catholic University of Leuven, in 1425.[4]

In the 18th century the brewery Den Horen (meaning "the horn") flourished. In 1708 Sebastien Artois became the master brewer at Den Horen, and gave his name to the brewery in 1717, now part of AB InBev, whose flagship beer, Stella Artois, is brewed in Leuven and sold in many countries.

Both world wars in the 20th century inflicted major damage upon the city. Upon Germany's entry into World War I, the town was heavily damaged by rampaging soldiers. Some German soldiers shot the burgomaster, the university rector and all of the city's police officers.[5] In all, about 300 civilians lost their lives.[6] The university library was also destroyed on 25 August 1914, using petrol and incendiary pastilles.[7][8] 230,000 volumes were lost in the destruction, including Gothic and Renaissance manuscripts, a collection of 750 medieval manuscripts, and more than 1,000 incunabula (books printed before 1501).[8][9] The destruction of the library shocked the world, with the Daily Chronicle describing it as war not only against civilians but also against "posterity to the utmost generation."[10] It was rebuilt after the war, and much of the collection was replaced. Great Britain (on the initiative of the John Rylands Library, Manchester) and the United States were major providers of material for the replenishment of the collection.[6] The new library building was financed by the National Committee of the United States for the Restoration of the University of Louvain and built to the design of architect Whitney Warren; it was officially opened on 4 July 1928.[11]

In World War II, after the start of the German offensive, Leuven formed part of the British Expeditionary Force's front line and was defended by units of the 3rd Division and Belgian troops. From 14 to 16 May 1940, the German Army Group B assaulted the city with heavy air and artillery support. The British withdrew their forces to the River Senne on the night of 16 May and the town was occupied the next day.[12] The new university library building was set on fire by shelling on 16 May and nearly a million books were lost.[13]

Given the presence of the KULeuven, an important European institution for academic research and education, much of the local economy is concentrated on spin-offs from academic research. There are several biotech and ICT companies; nl (Gasthuisberg), the academic hospital and research centre and a large number of private service providers in the medical and legal fields.

Because it is the capital of the region of Flemish-Brabant, many governmental institutions are located in Leuven, as well as the regional headquarters of transport corporations such as De Lijn. As the largest and one of the oldest Flemish cities in the immediate vicinity, with a large range of cafés, restaurants, cultural institutions and shopping neighbourhoods, Leuven also attracts people from nearby cities and villages.

Leuven is the worldwide headquarters of Anheuser-Busch InBev, the largest beer company in the world. InBev's Stella Artois brewery and main offices dominate the entire north-eastern part of the town, between the railway station and the canal to Mechelen.

Nowadays Leuven has a large student population, mainly concentrated around the city centre. The Katholieke Universiteit Leuven (KU Leuven; University of Leuven) is the oldest Catholic university still in existence in the world, and the largest university in Belgium. There are also a number of hogescholen (technical universities, literally translated: "high schools"), such as the KHLeuven (the Catholic High School Leuven) and Group T.

Within the city and its immediate surroundings most distances can be covered on foot or with a bicycle. Several streets are off-limits to vehicle traffic and within the city centre road speed regulations prescribe 30 km/h (19 mph) as the maximum speed limit, making it a pedestrian and bicycle-friendly city. There are also a few car parking lots.

There are numerous buses, primarily from the public transport company De Lijn, that connect the city with the region while providing travel options within the city center. The so-called Ringbus follows the ring road of the city. Except for long distance routes (such as to other cities) and other irregular bus services, most buses come by every 10 minutes. Buses 616, 652 and 651 connect Leuven with Brussels Airport.

The railway station of Leuven is located on the railways 35 (Leuven - Aarschot - Hasselt), 36 (Brussels - Liège), 36N (Schaarbeek - Leuven), 53 (Schellebelle - Leuven), and 139 (Leuven - Ottignies). In Bierbeek, south-west of Leuven, lies the beginning of HSL 2, the high-speed railway towards Liège.

The current mayor of Leuven is Louis Tobback, a socialist prominent on the national level, formerly minister of internal affairs and leader of the socialist faction in the lower chamber of the Belgian parliament, among other positions held. The governing coalition consists of SP.A (16 out of 45 seats in the municipal council) and CD&V (9 seats). The opposition is composed of N-VA (9 seats), Groen! (7 seats), open VLD (3 seats) and Vlaams Belang (1 seat).

One of Belgium's finest conservatories is based in Leuven: the Lemmens Institute, which is described as "Faculty of Music, Performing Arts and Education". It is known for its Music Therapy Education and its Wordart-Drama Education.

Leuven is well known for its summer rock festival, Marktrock. The main football club of the municipality is Oud-Heverlee Leuven, successor of K. Stade Leuven. Leuven also has some orchestras, such as the famous nl (Arenberg Orchestra).[14] The Cyclocross Leuven is a cyclo-cross race held in January.

In September 2009 the 'M - Museum Leuven' opened in Leuven. It is a museum for both contemporary and historical art located near het Ladeuzeplein. It has hosted exhibitions by international artists such as Angus Fairhurst, Sol LeWitt, Roe Ethridge and Charles Burns as well as Belgian artists like Ilse D'Hollander, Jan Vercruysse, Antoon Van Dyck and Freek Wambacq.

Leuven also has a rich beer culture, being the birthplace of several beers such as Stella Artois,[4] Leuvense Tripel, Domus[4] and Keizersberg. It also has several bars priding themselves in offering a wide variety of local and international beers, including a bar that claims to offer more than 3000 different beers.

The Higher Institute of Philosophy is famous worldwide for the archives of the German philosopher Edmund Husserl.

Leuven is twinned with:

Besides these, Leuven has friendly relations with: