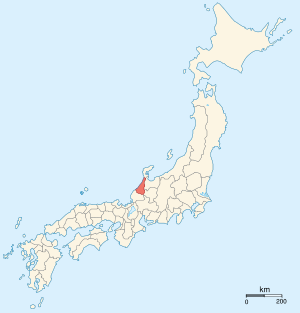 Kaga Province (加賀国, Kaga no kuni?) was an old province in the area that is today the southern part of Ishikawa Prefecture.[1] It was sometimes called Kashū (加州?).

Ruled successively by the Kaga ikki, Shibata Katsuie, and the Maeda clan, the capital of Kaga was Kanazawa. Kaga bordered on Echizen, Etchū, Hida, and Noto Provinces. It was part of Hokurikudō Circuit. Kaga was the last province under Provinces of Japan enactment system by 823.

Following the Meiji Restoration and the abolition of the han system in 1871, Kaga Province was renamed Kanazawa Prefecture. In 1872 Kanazawa was merged with Nanao Prefecture (the former Noto Province) to form today's Ishikawa Prefecture.

The provincial name was given to a WWII aircraft carrier of the Imperial Japanese Navy as well as a helicopter destroyer of the Japan Maritime Self-Defense Force.