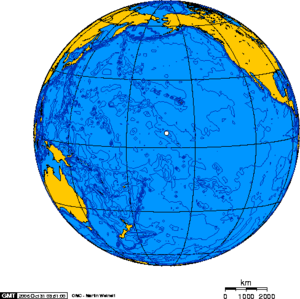 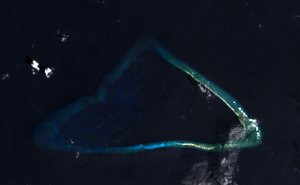 Kingman Reef /ˈkɪŋmən/ is a largely submerged, uninhabited triangular shaped reef, 9.5 nautical miles (18 km) east-west and 5 nautical miles (9 km) north-south,[1] located in the North Pacific Ocean, roughly half way between the Hawaiian Islands and American Samoa at Lua error in Module:Coordinates at line 668: callParserFunction: function "#coordinates" was not found..[2][3] It is the northernmost of the Northern Line Islands and lies 36 nautical miles (67 km) northwest of the next closest island (Palmyra Atoll), and 930 nautical miles (1,720 km) south of Honolulu.[2]

The pre-20th century names Danger Reef, Caldew Reef, Maria Shoal and Crane Shoal refer to this atoll, which by then was entirely submerged at high tide. Thomas Hale Streets described its state in the 1870s, when it had:

... hardly, as yet, assumed the distinctive features of an island. It is entirely under water at high tide, and but a few coral heads project here and there above the surface at low water. In the course of time, however, it will undoubtedly be added to the [northern Line Islands].[5]

Kingman Reef was discovered by the American Captain Edmund Fanning of the ship Betsey on June 14, 1798. Captain W. E. Kingman (whose name the island bears) described it on November 29, 1853. Kingman Reef was claimed in 1860 by the United States Guano Company, under the name "Danger Reef".[6] This claim was made under by the Guano Islands Act of 1856 although there is no evidence that guano existed or was ever mined on Kingman Reef.[7]

Lorrin A. Thurston formally annexed Kingman to the United States on May 10, 1922, by reading this declaration on shore:

Be it known to all people: That on the tenth of May, A.D. 1922, the undersigned agent of the Island of Palmyra Copra Co., Ltd., landed from the motorship Palmyra doth, on this tenth day of May, A.D. 1922, take formal possession of this island, called Kingman Reef, situated in longitude 162 degrees 18' west and 6 degrees 23' north, on behalf of the United States of America and claim the same for said company.

On December 29, 1934, the US Navy assumed jurisdiction over Kingman Reef.[8] The lagoon was used in 1937 and 1938 as a halfway station between Hawai'i and American Samoa by Pan American Airways flying boats (Sikorsky S-42B).[9] Pan Am wanted to expand flights into the Pacific and include Australia and New Zealand to their "Clipper" air routes. In 1935 it was decided that the lagoon at Kingman Reef was suitable for overnight stops en route from the U.S. to New Zealand via Samoa. Kingman Reef became the stopover to and from Pago Pago, American Samoa, located 1,600 miles (2,600 km) further south. A supply ship, the North Wind, was stationed at Kingman Reef to provide fuel, lodging, and meals. The S42B Pan American Clipper II, piloted by Captain Edwin Musick, landed at Kingman on its first flight on March 23, 1937. Several successful flights followed, but the flight on January 11, 1938 ended in tragedy. Shortly after the early morning take off from Pago Pago, bound for New Zealand, the Clipper exploded. The right outboard engine had developed an oil leak and the plane burst into flames while dumping fuel; there were no survivors. As a result of the tragedy, Pan Am ended flights to New Zealand via Kingman Reef and Pago Pago. A new route was established in July 1940 by way of Canton Island and New Caledonia.

On February 14, 1941, President Franklin Roosevelt issued Executive Order 8682 to create naval defenses areas in the central Pacific territories. The proclamation established "Kingman Reef Naval Defensive Sea Area" which encompassed the territorial waters between the extreme high-water marks and the three-mile marine boundaries surrounding the atoll. "Kingman Naval Airspace Reservation" was also established to restrict access to the airspace over the naval defense sea area. Only U.S. government ships and aircraft were permitted to enter the naval defense areas at Kingman Reef unless authorized by the Secretary of the Navy. 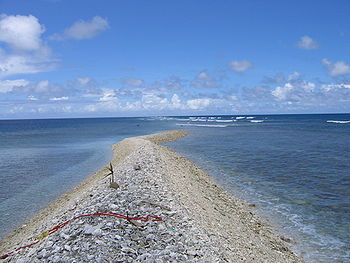 Kingman Reef supports a vast variety of marine life. Giant clams are abundant in the shallows, and there are approximately 38 genera and 130 species of stony corals present on the reef. This is more than three times the species diversity of corals found in the main Hawaiian Islands. The ecosystem of the reef and its subsequent food chain are known for the distinct quality of being primarily predator-based. The percentage of the total fish biomass on the reef is made up of 85% apex predators, creating a high level of competition for food and nutrients among local organisms — particularly sharks, jacks, and other carnivores. The threatened green sea turtles that frequent nearby Palmyra atoll travel to Kingman Reef to forage and bask on the coral rubble spits at low tide.

However, above sea level, the reef is usually barren of macroorganisms. Mainly constructed of dead and dried coral skeletons, providing only calcite as a source of nutrients, the small and narrow strips of dry land are only habitable by a handful of species for short periods of time. Most flora which begin to grow above water — primarily coconut palms — die out quickly due to the fierce tides and lack of resources necessary to sustain plant life.

On September 1, 2000, the Navy relinquished its control over Kingman Reef to the U.S. Fish and Wildlife Service. On January 18, 2001 Secretary of the Interior Bruce Babbitt created the Kingman Reef National Wildlife Refuge during his final days in office with Secretary's Order 3223. It is composed of the emergent coral rubble spits and all waters out to 12 nautical miles (22 km). While there are only 3 acres (0.012 km2) of land, 483,754 acres (1,957.68 km2) of water area is included in the Refuge.[10] Along with six other islands, the reef was administered as part of the Pacific Remote Islands National Wildlife Refuge Complex. In January 2009, that entity was upgraded to the Pacific Remote Islands Marine National Monument by President George W. Bush.[11]

Since the early 1940s, Kingman Reef has had very little human contact, though amateur radio operators from around the world have occasionally visited the reef to put it "on the air" in what is known as a DX-pedition. In 1974, a group of amateurs using the callsign KP6KR sailed to the reef and set up a temporary radio station and antenna. Other groups visited the island in subsequent years, including 1977, 1980, 1981, 1988 and 1993.

Most recently, a group of 15 amateur radio operators from the Palmyra DX Group visited the reef in October 2000. Using the FCC-issued special event callsign K5K, the group made more than 80,000 individual contacts with amateurs around the world over a period of 10 days.[12]