Baker Island /ˈbeɪkər/ is an uninhabited atoll located just north of the equator in the central Pacific Ocean about 3,090 km (1,920 mi) southwest of Honolulu. The island lies almost halfway between Hawaii and Australia. Its nearest neighbor is Howland Island, 42 mi (68 km) to the north-northwest; both have been territories of the United States since 1857, though the United Kingdom considered them part of the British Empire between 1897 and 1936.

Located at Lua error in Module:Coordinates at line 668: callParserFunction: function "#coordinates" was not found..[1] the island covers 2.1 km2 (0.81 sq mi),[2] with 4.8 km (3.0 mi) of coastline.[2] The climate is equatorial, with little rainfall, constant wind, and strong sunshine. The terrain is low-lying and sandy: a coral island surrounded by a narrow fringing reef with a depressed central area devoid of a lagoon with its highest point being 8 m (26 ft) above sea level.[2]

The island now forms the Baker Island National Wildlife Refuge and is an unincorporated and unorganized territory of the U.S. which vouches for its defense. It is visited annually by the U.S. Fish and Wildlife Service. For statistical purposes, Baker is grouped with the United States Minor Outlying Islands.

A cemetery and rubble from earlier settlements are located near the middle of the west coast, where the boat landing area is located. There are no ports or harbors, with anchorage available only offshore. The narrow fringing reef surrounding the island can be a maritime hazard, so there is a day beacon near the old village site. Baker's abandoned World War II runway, 5,463 ft (1,665 m) long, is completely covered with vegetation and is unserviceable. 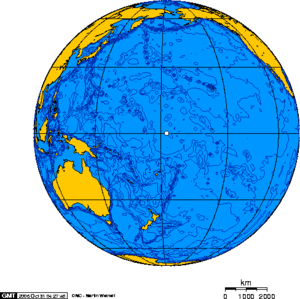 Baker was discovered in 1818 by Captain Elisha Folger of the Nantucket whaling ship Equator, who called the island "New Nantucket". In August 1825 Baker was sighted by Captain Obed Starbuck of the Loper, also a Nantucket whaler. The island is named for Michael Baker, who visited the island in 1834.[4] Other references state that he visited in 1832, and again on August 14, 1839, in the whaler Gideon Howland, to bury an American seaman.[5] Captain Baker claimed the island and in 1855, then he sold his interest to a group who later formed the American Guano Company.[6][7]

The United States took possession of the island in 1857, claiming it under the Guano Islands Act of 1856.[8] Its guano deposits were mined by the American Guano Company from 1859 to 1878. On 7 December 1886, it sold all its rights to the British firm John T. Arundel and Company, which made the island its headquarters for guano digging operations in the Pacific from 1886 to 1891. Arundel applied in 1897 to the British Colonial Office for a licence to work the island on the persumption that the USA had abandoned their claim. The United Kingdom then considered Baker Island as a British territory, while never formally annexing it. The United States raised the question at the beginning of the 1920s. After some diplomatic exchanges, they launched in 1935 the Baker, Howland and Jarvis Colonization Scheme and issued on May 1936 Executive Order 7358 to clarify their sovereignty.[9]

This short-lived attempt at colonization begun when American colonists arrived aboard the USCGC Itasca, the same vessel that brought colonists to neighboring Howland Island, on April 3, 1935. They built a lighthouse, substantial dwellings, and they attempted to grow various plants. The settlement was named Meyerton after Captain H.A. Meyer of the United States Army, who helped establish the camps in 1935. One sad-looking clump of coconut palms was jokingly called King-Doyle Park after two well-known citizens of Hawaii who visited on the Taney in 1938. This clump was the best on the island, planted near a water seep, but the dry climate and seabirds, eager for anything upon which to perch, did not give the trees or shrubs much of a chance to survive.[10] King-Doyle Park was later adopted as a geographic name by the USGS. Its population was four American civilians, all of whom evacuated in 1942 after Japanese air and naval attacks. During World War II it was occupied by the U.S. military.

On August 11, 1943, a US Army defense force arrived on Baker Island as part of the Gilbert and Marshall Islands campaign. In September 1943 a 5,463-foot (1,665 m) airfield was opened and was subsequently used as a staging base by Seventh Air Force B-24 Liberator bombers for attacks on Mili Atoll.[11] The 45th Fighter Squadron operating P-40 fighters operated from the airfield from September 1 - November 27, 1943. By January 1, 1944 the airfield was abandoned.[12]

LORAN radio navigation station Baker was a radio operations base in operation from September 1944 to July 1946. The station unit number was 91 and the radio call sign was NRN-1.[13]

Baker has no natural fresh water sources. It is treeless, with sparse vegetation consisting of four kinds of grass,[14] prostrate vines and low-growing shrubs. The island is primarily a nesting, roosting, and foraging habitat for seabirds, shorebirds, and marine wildlife.

Several varieties of shorebirds and other species inhabit the island and nearby waters, some considered endangered. The ruddy turnstone, bar-tailed godwit, sanderling and Pacific golden plover are considered species of least concern. The bristle-thighed curlew is considered vulnerable on the national conservation priority scheme. Green turtles and hawksbill turtles, both threatened, can be found along the reef.[15]

Seabird species such as the lesser frigatebird, brown noddy and sooty tern use the island for nesting and roosting. The island is also believed to be a rest stop for arctic-breeding shorebirds.

On June 27, 1974, Secretary of the Interior Rogers Morton created Baker Island National Wildlife Refuge which was expanded in 2009 to add submerged lands within 12 nautical miles (22 km) of the island. The refuge now includes 531 acres (215 ha) of land and 410,184 acres (165,996 ha) of water.[16] Baker, along with six other islands, was administered by the U.S. Fish and Wildlife Service as part of the Pacific Remote Islands National Wildlife Refuge Complex. In January 2009, that entity was redesignated the Pacific Remote Islands Marine National Monument by President George W. Bush.[17]

Public entry to the island is only by special use permit from the U.S. Fish and Wildlife Service and it is generally restricted to scientists and educators. Representatives from the agency visit the island on average once every two years, often coordinating transportation with amateur radio operators or the U.S. Coast Guard to defray the high cost of logistical support.[20]

Debris from past human occupation is scattered throughout the island and in offshore waters. Most is from the U.S. military occupation of the island from 1942 to 1946. The most noticeable remnant is the 5,400-by-150-foot (1,646 by 46 m) airstrip. It is completely overgrown with vegetation and is unusable. In the northeast section, apparently the main camp area, are the remains of several buildings and heavy equipment. Five wooden antenna poles about 40 feet (12 m) in height remain standing in the camp. Debris from several crashed airplanes and large equipment such as bulldozers is scattered around the island. Numerous bulldozer excavations containing the remnants of metal, fuel and water drums are scattered about the north central portion and northern edge of the island. The Navy reported the loss of 11 landing craft in the surf during World War II.[21]