Navassa Island (/nəˈvæsə/; French: La Navasse, Haitian Creole: Lanavaz) is a small, uninhabited island in the Caribbean Sea. It is administered as unorganized unincorporated territory of the United States, which administers it through the U.S. Fish and Wildlife Service.

Haiti has claimed sovereignty over Navassa since 1801 and claims the island in its constitution.[1][2][3][4]

Navassa Island is about 2 square miles (5.2 km2) in area. It is located 35 miles (56 km) west of Haiti's southwest peninsula,[5] 103 miles (166 km) south of the U.S. naval base at Guantanamo Bay, Cuba, and about one-quarter of the way from Haiti to Jamaica in the Jamaica Channel.

Navassa reaches an elevation of 250 feet (76 m) at Dunning Hill 110 yards (100 m) south of the lighthouse, Navassa Island Light. This location is 440 yards (400 m) from the southwestern coast or 655 yards (600 m) east of Lulu Bay. The island's latitude and longitude are Lua error in Module:Coordinates at line 668: callParserFunction: function "#coordinates" was not found.. 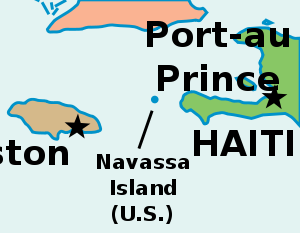 Navassa Island is west of Haiti, south of Cuba, east of Jamaica.

Navassa Island's topography and ecology are similar to that of Mona Island, a small limestone island located in the Mona Passage, between Puerto Rico and the Dominican Republic. It shares historical similarities with Mona Island since both are U.S. territories, were once centers of guano mining, and are nature reserves. Transient Haitian fishermen and others camp on the island but the island is otherwise uninhabited.[6] It has no ports or harbors, only offshore anchorages, and its only natural resource is guano; economic activity consists of subsistence fishing and commercial trawling activities.[8]

There were eight species of native reptiles, all of which are believed to be, or to have been, endemic to Navassa Island: Celestus badius (an anguid lizard), Aristelliger cochranae (a gecko), Sphaerodactylus becki (a gecko), Anolis longiceps (an anole), Cyclura (cornuta) onchiopsis (a rock iguana), Leiocephalus eremitus (a curly-tailed lizard), Tropidophis bucculentus (a dwarf boa), and Typhlops sulcatus (a tiny snake).[9] Of these the first four remain common with the last four likely extinct.[9] Feral cats, dogs and pigs currently inhabit the island. 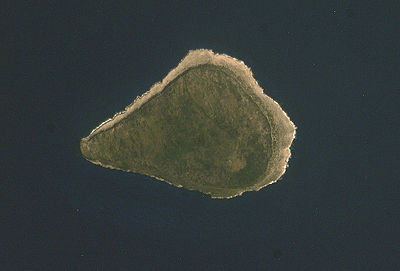 A satellite image of Navassa Island. 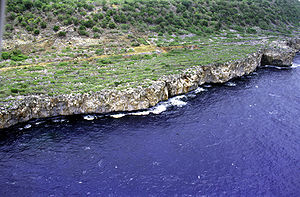 An aerial photo showing the steep rocky coast that rings the island.

In 1504, Christopher Columbus, stranded on Jamaica during his fourth voyage, sent some crew members by canoe to Hispaniola for help. They ran into the island on the way, but it had no water. They called it Navaza (from "nava-" meaning plain, or field), and it was avoided by mariners for the next 350 years.

From 1801 to 1867 the successive constitutions of Haiti claimed national sovereignty over adjacent islands, both named and unnamed, although Navassa was not specifically enumerated until 1874.[10] Despite this implicit claim, Navassa Island was claimed for the United States on September 19, 1857, by Peter Duncan, an American sea captain, under the Guano Islands Act of 1856, for the rich guano deposits found on the island, and for not being within the lawful jurisdiction of any other government, nor occupied by another government's citizens.[11]

Haiti protested the annexation, but on July 7, 1858, U.S. President James Buchanan issued an Executive Order upholding the American claim, which also called for military action to enforce it. Navassa Island has since been maintained by the United States as an unincorporated territory (according to the Insular Cases). The United States Supreme Court on November 24, 1890, in Jones v. United States, 137 U.S. 202 (1890) Id. at 224 found that Navassa Island must be considered as appertaining to the United States, creating a legal history for the island under US law unlike many other islands originally claimed under the Guano Islands Act. As listed in its 1987 constitution, Haiti maintains its claim to the island.[12]

Guano phosphate is a superior organic fertilizer that became a mainstay of American agriculture in the mid-19th century. Duncan transferred his discoverer's rights to his employer, an American guano trader in Jamaica, who sold them to the newly formed Navassa Phosphate Company of Baltimore. After an interruption for the American Civil War, the Company built larger mining facilities on Navassa with barrack housing for 140 black contract laborers from Maryland, houses for white supervisors, a blacksmith shop, warehouses, and a church.[13]

Mining began in 1865. The workers dug out the guano by dynamite and pick-axe and hauled it in rail cars to the landing point at Lulu Bay, where it was put into sacks and lowered onto boats for transfer to the Company barque, the S.S. Romance. The living quarters at Lulu Bay were called Lulu Town, as appears on old maps. Railway tracks eventually extended inland.

Hauling guano by muscle-power in the fierce tropical heat, combined with general disgruntlement with conditions on the island, eventually provoked a rebellion in 1889, in which five supervisors died. A U.S. warship returned eighteen of the workers to Baltimore for three separate trials on murder charges. A black fraternal society, the Order of Galilean Fisherman, raised money to defend the miners in federal court, and the defense built its case on the contention that the men acted in self-defense or in the heat of passion, and that the United States did not have jurisdiction over the island.[14][15]

The cases, including Jones v. United States, 137 U.S. 202 (1890) went to the U.S. Supreme Court in October 1890, which ruled the Guano Act constitutional, and three of the miners were scheduled for execution in the spring of 1891. A grass-roots petition drive by black churches around the country, also signed by white jurors from the three trials, reached President Benjamin Harrison, who commuted the sentences to imprisonment and mentioned the case in a State of the Union Address.[14][15] Guano mining resumed on Navassa at a much reduced level. The Spanish–American War of 1898 forced the Phosphate Company to evacuate the island and file for bankruptcy, and the new owners abandoned the island after 1901. 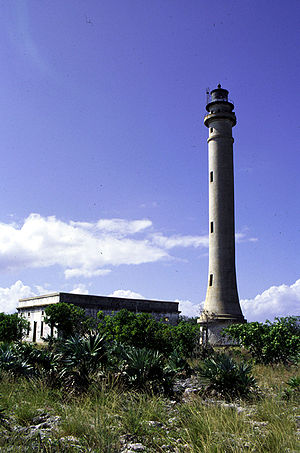 Navassa Island's lighthouse with the light keeper's quarters in the background. 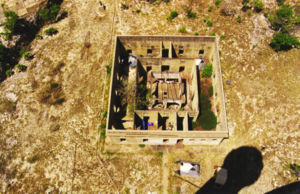 Navassa became significant again with the opening of the Panama Canal in 1914. Shipping between the American eastern seaboard and the Canal goes through the Windward Passage between Cuba and Haiti. Navassa, a hazard to navigation, needed a lighthouse. The U.S. Lighthouse Service built Navassa Island Light, a 162-foot (46 m) tower on the island in 1917, 395 feet (120 m) above sea level. A keeper and two assistants were assigned to live there until the United States Lighthouse Service installed an automatic beacon in 1929.[16]

After absorbing the Lighthouse Service in 1939, the U.S. Coast Guard serviced the light twice each year. The U.S. Navy set up an observation post for the duration of World War II. The island has been uninhabited since then. Fishermen, mainly from Haiti, fish the waters around Navassa.

A scientific expedition from Harvard University studied the land and marine life of the island in 1930. After World War II amateur radio operators occasionally visited to operate from the territory, which is accorded "entity" (country) status by the American Radio Relay League.[17] The callsign prefix is KP1.[17] From 1903 to 1917, Navassa was a dependency of the U.S. Guantanamo Bay Naval Base, and from 1917 to 1996 it was under United States Coast Guard administration. Since January 16, 1996, it has been administered by U.S. Department of the Interior.

In 1996 the United States Coast Guard dismantled the light on Navassa. An inter-agency task force headed by the U.S. Department of State transferred oversight of the island to the U.S. Department of the Interior. By Secretary's Order No. 3205 of January 16, 1997, the Interior Department assumed control and placed the island under its Office of Insular Affairs. For statistical purposes, Navassa was grouped with the now-obsolete term United States Miscellaneous Caribbean Islands and is now grouped with other islands claimed by the U.S. under the Guano Islands Act as the United States Minor Outlying Islands.[18]

A 1998 scientific expedition led by the Center for Marine Conservation in Washington, D.C. described Navassa as "a unique preserve of Caribbean biodiversity."[8] The island's land and offshore ecosystems have survived the 20th century virtually untouched.[19]

The Office of Insular Affairs retains authority for the island's political affairs, and judicial authority is exercised directly by the nearest U.S. Circuit Court. Access to Navassa is hazardous and visitors need permission from the Fish and Wildlife Office in Boquerón, Puerto Rico to enter its territorial waters or land.[6]

Since this change of status, amateur radio operators have repeatedly been denied entry.[17] In October 2014 permission was granted for a two-week DX-pedition in February 2015.[21][22] The U.S. Department of Interior and the U.S. Fish & Wildlife Service, who have jurisdiction over Navassa, gave written permission. Authorization to use the callsign "K1N" for the duration of the DX-pedition was issued by a Special Event Callsign Coordinator on behalf of the U.S. Federal Communications Commission who has control of all amateur radio licensing on U.S. territory. The DX-pedition team, accompanied by U.S. Fish & Wildlife Service personnel arrived on January 31, 2015 with the first on-air radio operations starting on February 1, 2015.

The K1N DX-pedition team, along with USFWS biologists and law enforcement officers, were on Navassa from January 31 to February 15, 2015. The amateur radio group made 140,000 contacts with amateur radio operators around the world. The USFWS biologists gleaned much-needed information for preparation of the Navassa Island Refuge Management Plan. During their stay, the team gave clothing, clean water, food and other supplies to the needy Haitian fishermen who visited the island.

The unofficial flag of Navassa Island was designed for and first flown at a World War II memorial tribute at the USS Arizona Memorial at Pearl Harbor, Hawaii on December 7, 2001. It is a white and blue horizontal bicolor, with a profile of the island (and its landmark lighthouse, with exaggerated size) in the white band.[23]