L'Anse aux Meadows (/ˈlænsi ˈmɛdoʊz/;[1] from the French L'Anse-aux-Méduses or "Jellyfish Cove") is an archaeological site on the northernmost tip of the island of Newfoundland in the Canadian province of Newfoundland and Labrador. Discovered in 1960, it is the most famous site of a Norse or Viking settlement in North America outside Greenland.

Dating to around the year 1000, L'Anse aux Meadows is the only site widely accepted as evidence of pre-Columbian trans-oceanic contact. It is notable for its possible connection with the attempted colony of Vinland established by Leif Erikson around the same period or, more broadly, with Norse exploration of the Americas. It was named a World Heritage site by UNESCO in 1978.

The site now known as L'Anse aux Meadows was first recorded as Anse à la Médée ("the Médée's Cove") on a French nautical chart made in 1862. The toponym probably referred to a ship named after the Greek mythological figure of Medea, which would have been a typical name for seagoing vessels at the time.[2] The cove facing the modern village of L'Anse aux Meadows is still named Médée Bay.[2]

How the village itself came to be named "L'Anse aux Meadows" is not clear. Parks Canada, which manages the site, states that the current name was anglicized from "Anse à la Médée" after English speakers settled in the area.[2] Another possibility is that "L'Anse aux Meadows" is a corruption of the French designation "L'Anse aux Méduses", which means "Jellyfish Cove".[3] The shift from "Méduses" to "Meadows" may have occurred because the landscape in the area tends to be open, with meadows.[4]

In 1960, the archaeological remains of a Norse village were discovered in Newfoundland by two Norwegians, the explorer Helge Ingstad and the archaeologist Anne Stine Ingstad, who were husband and wife. Based on the idea that the Old Norse name "Vinland", mentioned in the Icelandic Sagas, meant "wine-land", historians had long speculated that the region contained wild grapes. Because of this, the common hypothesis prior to the Ingstads' theories was that the Vinland region existed somewhere south of the Northern Massachusetts coast, because that is roughly as far north as grapes grow naturally. The Ingstads doubted this theory, saying "that the name Vinland probably means land of meadows...and includes a peninsula."[5] This speculation was based on the belief that the Norse would not have been comfortable settling in areas along the American Atlantic coast. This dichotomy between the two views could have possibly been driven due to the two historic ways in which the first vowel sound of "Vinland" could be pronounced.

In 1960, George Decker, a citizen of the small fishing hamlet of L'Anse aux Meadows, led Helge Ingstad to a group of mounds near the village that the locals called the "old Indian camp".[2] These bumps covered with grass looked like the remains of houses.[6] Helge Ingstad and Anne Stine Ingstad carried out seven archaeological excavations there from 1961 to 1968. They investigated eight complete house sites as well as the remains of a ninth.[7] They determined that the site was of Norse origin because of definitive similarities between the characteristics of structures and artifacts found at the site compared to sites in Greenland and Iceland from around A.D. 1000.

L'Anse aux Meadows is the only confirmed Norse site in North America outside Greenland. It represents the farthest-known extent of European exploration and settlement of the New World before the voyages of Christopher Columbus almost 500 years later. Historians have speculated that there were other settlement sites, or at least Norse-Native American trade contacts, in the Canadian Arctic.[8] In 2012, possible Norse outposts were identified in Nanook at Tanfield Valley on Baffin Island, as well as Nunguvik, Willows Island and the Avayalik Islands.[9][10] 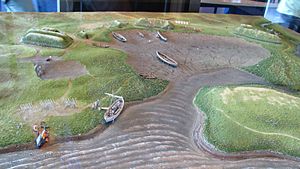 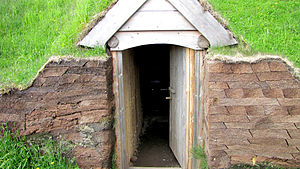 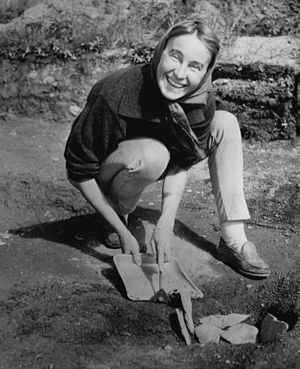 Co-discoverer Anne Stine Ingstad examines a fire pit at the site in 1963.

The archaeological excavation at L'Anse aux Meadows was conducted in the 1960s by an international team led by archaeologist Anne Stine Ingstad (Helge Ingstad's wife) and under the direction of Parks Canada of the Government of Canada in the 1970s. Following each period of excavation, the site was reburied to protect and conserve the cultural resources.

The Norse settlement at L'Anse aux Meadows has been dated to approximately 1,000 years ago, (carbon dating estimate 990 - 1050 CE[11]) an assessment that tallies with the relative dating of artifact and structure types.[12] Today the area mostly consists of open, grassy lands; but 1000 years ago, there were forests which were beneficial in boat-building, house-building and for iron extraction.[13] The remains of eight buildings (labeled A - J) were located. They are believed to have been constructed of sod placed over a wooden frame. Based on associated artifacts, the buildings were variously identified as dwellings or workshops. The largest dwelling (F) measured 28.8 by 15.6 m (94 by 51 ft) and consisted of several rooms.[14] Three small buildings (B, C, G) may have been workshops or living quarters for lower-status crew or slaves. Workshops were identified as an iron smithy (building J) containing a forge and iron slag, a carpentry workshop (building D), which generated wood debris, and a specialized boat repair area containing worn rivets. Other artifacts found at the site consisted of common everyday Norse items, including a stone oil lamp, a whetstone, a bronze fastening pin, a bone knitting needle, and part of a spindle. Stone weights, which were found in building G, may have been part of a loom. The presence of the spindle and needle suggests that women as well as men inhabited the settlement.[6] There is no way of knowing how many men and women lived at the site at any given time, however archaeological evidence of the dwellings suggest it had the capacity of supporting 30 to 160 individuals.[15]

Food remains included butternuts, which are significant because they do not grow naturally north of New Brunswick. Their presence probably indicates the Norse inhabitants travelled farther south to obtain them.[16] There is also evidence to suggest that the Norse hunted an array of animals that used to inhabit the area. These included caribou, wolf, fox, bear, lynx, marten, all types of birds and fish, seal, whale and walrus. This area is no longer rich in game due in large part to the harsh winters that plagues the region for much of the year. This forces the game to either hibernate or venture south as the wind, deep snow and sheets of ice cover the area. These losses made the harsh winters very difficult for the Norse people at L'Anse aux Meadows.[17] This lack of game supports archaeologists' beliefs that the site was inhabited by the Norse for a relatively short period of time.

Prior to European settlement, there is evidence of different aboriginal occupations in the area of L'Anse aux Meadows, the oldest dated at roughly 6,000 years ago. None was contemporaneous with the Norse occupation. The most prominent of these earlier occupations were by the Dorset people, who predated the Norse by about 200 years.[18] 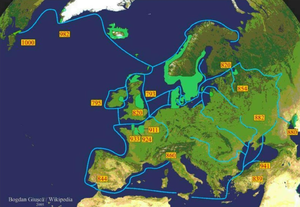 Territories, voyages, and conquests of the Norse at L'Anse aux Meadows

Adam of Bremen, a German cleric, was the first European to mention Vinland. In a text he composed around 1073, he wrote that

He [i.e. the Danish king, Sven Estridsson] also told me of another island discovered by many in that ocean. It is called Vinland because vines grow there on their own accord, producing the most excellent wine. Moreover, that unsown crops abound there, we have ascertained not from fabulous conjecture but from the reliable reports of the Danes.[19]

This excerpt is from a history Adam had composed of the archbishops of Hamburg-Bremen who ruled over Scandinavia (the original home of the Norse people) at the time.

Norse sagas are written versions of older oral traditions. Two Icelandic sagas, commonly called the Saga of the Greenlanders and the Saga of Erik the Red, describe the experiences of Norse Greenlanders who discovered and attempted to settle land to the west of Greenland, which they called Vinland. The sagas suggest that the Vinland settlement failed because of conflicts within the Norse community, as well as between the Norse and the native people they encountered, whom they called Skrælingar.[20]