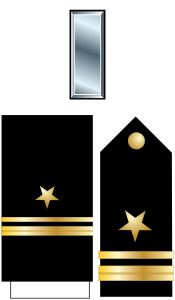 Lieutenant, junior grade, ranks above ensign and below lieutenant and is equivalent to a first lieutenant in the other uniformed services (the Army, Marine Corps and Air Force) and sub-lieutenant in the Royal Navy and the navies of many Commonwealth countries.

Promotion to LTJG is governed by Department of Defense policies derived from the Defense Officer Personnel Management Act of 1980. DOPMA guidelines suggest all "fully qualified" ensigns should be promoted to LTJG. The time for promotion to LTJG is a minimum of two years after commissioning in the Navy or 18 months in the Coast Guard. Lieutenants, junior grade typically lead petty officers and non-rated personnel, unless assigned to small aircraft or on staff duty. A LTJG's usual shipboard billet is as a Division Officer.

Lieutenant, junior grade is often referred to colloquially as JG ("Jay-Gee"). Prior to March 3, 1883, this rank was known in the Navy as Master.[3]