From Infogalactic: the planetary knowledge core
Jump to: navigation, search
For information on the main advisor to a federal party leader on matters pertaining to Quebec, see Quebec lieutenant.

The Lieutenant Governor of Quebec (/lɛfˈtɛnənt/, French (masculine): Lieutenant-gouverneur du Québec, or (feminine): Lieutenant-gouverneure du Québec) is the viceregal representative in Quebec of the Canadian monarch, Queen Elizabeth II, who operates distinctly within the province but is also shared equally with the ten other jurisdictions of Canada, as well as the other Commonwealth realms and any subdivisions thereof, and resides predominantly in her oldest realm, the United Kingdom. The Lieutenant Governor of Quebec is appointed in the same manner as the other provincial viceroys in Canada and is similarly tasked with carrying out most of the monarch's constitutional and ceremonial duties.[1] The present and 29th Lieutenant Governor of Quebec is J. Michel Doyon, who has served in the role since 24 September 2015 following Prime Minister Stephen Harper announcing on 21 July 2015.[2]

The Lieutenant Governor of Quebec is vested with a number of governmental duties, though, unlike all other Canadian provinces, and while he or she does remain one of the two parts of the legislature, the viceroy in Quebec does not read the Throne Speech, a session of the National Assembly instead beginning with the Opening Speech by the premier.[3][4] The lieutenant governor is also expected to undertake various ceremonial roles. For instance, upon installation, the lieutenant governor automatically becomes a Knight or Dame of Justice and the Vice-Prior in Quebec of the Most Venerable Order of the Hospital of Saint John of Jerusalem and will also present numerous other provincial honours and decorations,[5] as well as various awards that are named for and presented by the lieutenant governor,[6] which were reinstated in 2000 by Lieutenant Governor Lise Thibault. These honours are presented at official ceremonies, which count amongst hundreds of other engagements the lieutenant governor partakes in each year, either as host or guest of honour; in 2006, the Lieutenant Governor of Quebec undertook 400 engagements and 200 in 2007.[7] 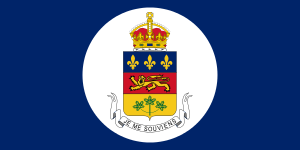 Standard of the Lieutenant Governor of Quebec

At these events, the lieutenant governor's presence is marked by the lieutenant governor's standard, consisting of a blue field bearing the escutcheon of the Arms of Her Majesty in Right of Quebec surmounted by a crown and set within a white disc; the Quebec viceregal flag is only one of two that are significantly different from all the others in Canada. Within Quebec, the lieutenant governor also follows only the sovereign in the province's order of precedence, preceding even other members of the Canadian Royal Family and the Queen's federal representative. 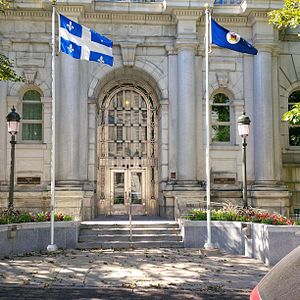 The entrance of the offices of the Lieutenant Governor of Quebec, at 1050 des Parlementaires, in Québec City

It has been argued by Jeremy Webber and Robert Andrew Young that, as the office is the core of authority in the province, the secession of Quebec from Confederaton would first require the abolition or transformation of the post of Lieutenant Governor of Quebec; such an amendment to the constitution of Canada could not be done without, according to Section 41 of the Constitution Act, 1982, the approval of the federal parliament and all other provincial legislatures in Canada.[8] Others, such as J. Woehrling, however, have claimed that the legislative process towards Quebec's independence would not require any prior change to the viceregal post.[9] Young also felt that the lieutenant governor could refuse Royal Assent to a bill that proposed to put an unclear question on sovereignty to referendum or was based on the results of a referendum that asked such a question.[10] 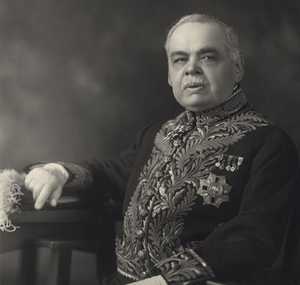 One of the few examples in Canada of a viceroy exercising the royal prerogative against or without ministerial advice came in 1887, when Lieutenant Governor Auguste-Réal Angers dismissed the Cabinet headed by Premier Honoré Mercier; a report concluded that Mercier's government had benefited from a kickback scheme with contractors building the Baie des Chaleurs railway.[13]

The appointment of Jean-Louis Roux as Lieutenant Governor of Quebec by Governor General Roméo LeBlanc, on the advice of Prime Minister Jean Chrétien, stirred controversy, as Roux was well known as a strong opponent of Quebec independence and, soon after he took up the post, it was revealed that, as a university student in the 1940s, he had worn a swastika on his lab coat in protest of the proposal to invoke conscription for service in World War II and had participated in an anti-Semitic protest.[14][15] Roux had, in an interview after his appointment as lieutenant governor, stated that he might have to use the reserve powers of the Crown should certain circumstances arise following a referendum result in favour of Quebec's separation from Canada; a statement that displeased Roux's premier at the time, Lucien Bouchard. Bouchard thereafter exploited the revelation of Roux's past anti-Semitism and the Lieutenant Governor soon resigned his post voluntarily in 1996.[14][16] The following year, Bouchard tabled in the legislature three motions, calling the Office of the Lieutenant Governor "a heritage of the colonial past", the appointment process controversial and interfering, and demanding the post be abolished, though, until then, the federal Crown-in-Council should appoint a person "democratically designated by the [Quebec] Assembly".[16]