Shoulder boards of the rank of Marshal of Yugoslavia for all three branches of the Yugoslav People's Army: Ground Forces, Air Force and the Navy 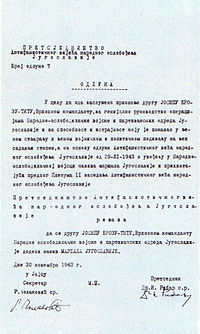 History of the rank

The only person to ever hold the rank of "Marshal of Yugoslavia" was Josip Broz Tito, with the term "Marshal" becoming synonymous with his name in Yugoslavia. He received it at the second session of AVNOJ at Jajce on November 29, 1943, and held it until his death on May 4, 1980.[1]

Adjutants to the Marshal of Yugoslavia