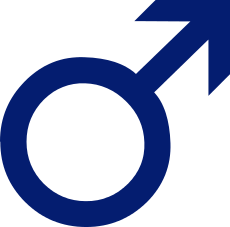 A generic symbol for masculism

Masculism or masculinism may variously refer to advocacy of the rights or needs of men; the adherence to or promotion of opinions, values, attitudes, etc. regarded as typical of men.[1][2][3] Alternatively, masculism (sometimes called androcentrism) may refer to an approach that is focused on male superiority or dominance[4][5][6][7] to the exclusion of women.[1]

The Oxford English Dictionary (OED) defines masculism as a synonym of masculinism which the OED regards as the "advocacy of the rights of men; adherence to or promotion of opinions, values, etc., regarded as typical of men; (more generally) anti-feminism, machismo."[8][9]

Philosopher Ferrell Christensen differentiates the words "masculism" and "masculinism"; he defines the latter as promoting the attributes of manliness.[2] Political scientist Georgia Duerst-Lahti also distinguishes between the two terms, with masculism being more associated with the early gender egalitarian days of men's movement, while masculinism refers to patriarchy and its ideology.[10][11]

Christensen differentiates between "progressive masculism" and an "extremist version". The former welcomes many of the societal changes promoted by feminists, while stating that many aimed at reducing sexism against women have had the effect of increasing it against men.[2] The latter promotes male supremacy to some degree and is generally based on a belief in women's inferiority. Nicholas Davidson, in his book The Failure of Feminism, describes an extremist version of masculism which he termed "virism". According to Davidson, in this view "What ails society is 'effeminacy'. The improvement of society requires that the influence of female values be decreased and the influence of male values increased…."[2][12] Gender theories, which have frequently focused on woman-based or feminist approaches, have come to include a "masculism" approach which seeks to examine oppression in a masculinist society from the perspectives of men, most of whom do not benefit from that society.[13] From a feminist perspective to philosophy, masculinism seeks to value and include only male views, and claim "that anything that cannot be reduced or translated in men's experience should be excluded from the subject-matter of philosophy.[1]

The term masculism was coined by Charlotte Perkins Gilman who used it a 1914 public lecture series titled "Studies in Masculism".[14][15] She used the term to refer to androcentrism and opposition to women's rights and, more broadly, to describe men's collective actions on behalf of their own sex.[14] The Oxford English Dictionary cites the first recorded use of the synonym masculinism in a The Freewoman article in November 1911.[16]

Topic areas of interest to masculism

Many masculists suggest the abolition of co-educational schooling, believing that single-sex schools are preferred for the well-being of boys.[17]

Data from 1994 in the U.S. reported that men make up 94% of workplace fatalities. Masculist Warren Farrell has argued that men are often clustered in dirty, physically demanding and hazardous jobs in an unjustifiably disproportionate manner.[3]

Masculists express concern about violence against men being depicted as humorous, in the media and elsewhere.[18]

Masculists also express concern about violence against men being ignored, minimized, or taken less seriously than violence against women.[17][19] Some assert that there is gender symmetry in domestic violence.[17] Another concern expressed is that assumptions of female innocence or sympathy for women may result in disproportionate penalties for women and men for similar crimes,[18] lack of sympathy for male victims in domestic violence cases, and dismissal of female-on-male sexual assault and sexual harassment cases.

"Custody law is perhaps the best-known area of men's rights activism", as it is more common for the mother to obtain custody of children in case of divorce. David Benatar, head of philosophy at the University of Cape Town, argues: "When the man is the primary care-giver his chances of winning custody are lower than when the woman is the primary care-giver. Even when the case is not contested by the mother, he's still not as likely to get custody as when the woman's claim is uncontested".[20]

Masculists cite higher rates of suicide in men than women.[17]

To the extent that masculism is associated with antifeminist masculinism, its primary focus is on "masculinity and the place of white heterosexual men in North America and European societies."[17]

Some masculinists believe that differentiated gender roles are natural. There is considerable evidence for social influences (e.g. gender division of labor, socialization) as the sole or primary origin of gender differentiation.[21][22] Furthermore, belief in inherent gender differences allows for inequality and for the dominant group to assert power by means of perceived difference.[21] Some parts of the masculinist movement have to some extent borrowed concepts of evolutionary psychology: this theory argues that adaptation during prehistory resulted in complementary but different roles for the different genders, and that this balance has been destabilized by feminism since the 1960s.[17]

Some masculinist movements are explicitly antifeminist.[17] According to Blais and Dupuis-Déri, "the contents of [masculinist] websites and the testimony of feminists that we questioned confirm that masculinists are generally critical of even moderate feminists and feminists at the head of official feminist organizations."[17] Some masculinist activism has involved disruption of events organized by feminists and lawsuits against feminist academics, journalists, or activists.[17] Furthermore, masculinist actions are sometimes extreme; father's rights activists have bombed family courts in Australia and have issued bomb threats in the UK, although it is ambiguous whether there was public and organized militant group involvement.[17] They have also engaged in "tire-slashing, the mailing of excrement-filled packages, threats against politicians and their children."[17] Spokesmen for these groups have also spoken out against public awareness campaigns to prevent sexual assault, arguing that they portray a negative image of men, and one masculinist group harassed administrators of dozens of battered women's shelters and women's centers.[17]

Feminists[who?] respond to the different ideologies of masculism in different ways. Masculists who promote gender equality are often considered male feminists.[23] It is the general opinion of modern feminists that masculism, when defined as "male superiority or dominance",[4] is inherently opposed to the equality cause and is a form of misogyny.[24]