From Infogalactic: the planetary knowledge core
Jump to: navigation, search
"Oppressed" redirects here. For the Welsh band, see The Oppressed. For other uses, see Oppression (disambiguation). 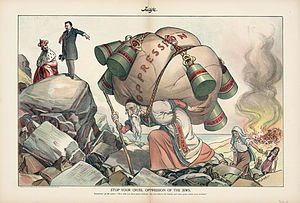 Oppression derives from the concept of being weighted down, and is often depicted as such. Here, a political cartoon shows a Jew laboring under the metaphorical oppression of the Russian Tsar

Oppression is the exercise of authority or power in a burdensome, cruel, or unjust manner,[1] often under the guise of governmental authority or cultural opprobrium.

Oppression may be overt or covert, depending on how it is practiced. Oppression refers to discrimination when the injustice does not target and may not directly afflict everyone in society but instead targets or disproportionately impacts specific groups of people. No universally accepted model or terminology has yet emerged to describe oppression in its entirety, although some scholars cite evidence of different types of oppression, such as social oppression, cultural, political, religious/belief, institutional oppression, and economic oppression.

The Universal Declaration of Human Rights offers a benchmark from which to assess both individual and structural models of oppression. The concept, popularized in Karl Marx and Friedrich Engels' Communist Manifesto of 1848, is often used to justify state persecution.

Social oppression is the socially supported mistreatment and exploitation of a group, category, or team of people or individuals.

Several movements have arisen that specifically aim to oppose, analyze and counter oppression in general; examples include Liberation Theology in the Christian world, and Re-evaluation Counselling in psychotherapy.