Club Atlético Monarcas Morelia is a Mexican professional football club based in Morelia, Michoacán, playing in Liga MX.[1] The team is owned by Grupo Salinas and plays its home games in Estadio Morelos.

Club Atlético Morelia was founded November 21, 1924, as "Oro Morelia" in Morelia, Michoacán. In 1950, Club Deportivo Morelia was among the teams that founded the Segunda División. After the 1956–1957 season, in which they ended up in second place, they were officially promoted into the Primera División to replace Puebla. After an unsuccessful season, in 1968 Monarcas Morelia was relegated back to the Segunda División. During mixed 1968–1971 seasons, C.A. Morelia appointed Nicandro Ortiz as chairman. Ortiz acquired the team and strengthened its position in the league.

The 1978–1979 season thrust Morelia into contention for promotion; in 1980, Monarcas Morelia played under manager Diego Malta who helped his team towards the Mexico Championship and finally promotion to the Primera División in 1981.

In 1996 the major broadcast company TV Azteca bought the team. By the year 2000 the club were playing under the Monarcas moniker. In recent years Monarcas Morelia has been one of the main protagonists in the Primera División.

Although the team had played Mexican professional soccer for 70 years, it had never won a first division tournament until winter 2000, when the club raised the cup after beating Toluca on penalties. The team was crowned champions away in the Bombonera Stadium. The Morelos Stadium has never been the site of its team winning a final. On the day after the victory, a crowd that some[who?] estimate at 100 thousand people welcomed the team as it paraded along Morelia's main avenue, Avenida Madero on their way to the stadium where the crowd congregated as the team raised the cup and the fans congratulated the team for its first ever first division trophy.

Monarcas Morelia has played three other finals (Clausura 2002, Apertura 2003 and Clausura 2011) which they lost to Toluca, Monterrey and Pumas respectively.

After missing the playoffs for three consecutive tournaments, Morelia ended in third place in the general table in the Apertura 2009. Morelia defeated Santos Laguna in the first round, 4–2 on aggregate. Morelia was defeated by Cruz Azul in a semi-final that was filled with controversy because Cruz Azul player Joel Huiqui intentionally used his hand to hit the ball away and prevent Morelia midfielder Wilson Tíago from scoring. (Ironically, Huiqui now plays for Morelia.) With a 2–1 aggregate score, Morelia was eliminated. Morelia qualified for the 2010 Copa Libertadores by ending in third place in the classification phase. It was the second time that Morelia participated in the Copa Libertadores, the first being in 2002. Morelia was the Runner-up of the Clausura 2011, after a hard fought final. Pumas won this 3–2 on aggregate, taking the trophy home.

Morelia is the 2010 SuperLiga champion, with a 2–1 victory in the finals over the New England Revolution in which Miguel Sabah scored both Morelia's goals.

On November 5,2013 Monarcas Morelia won their first Copa MX in a 3–3 match that would take them to penalties and take the victory. This title also made them participate in the first Supercopa MX edition, which they won against Tigres UANL with a global score of 5–4.

After 15 years, the terrible 2014–15 campaign made Monarcas one of the last teams in the "average table" which decides which time will be relegated. That's why Enrique Meza was chosen to be the coach for the current Apertura 2015 season. Meza already saved Morelia once, in the 1995–96 season (almost 20 years ago).

The club's colors are generated from the city's flag which are yellow and red, which are the same colors in the Spanish flag, because the city is a novohispana city.

In the club's beginnings the club went under the name of Oro and were known as the canarios (canary) until 1999 when the club changed its name to Monarcas, due to the 3 monarchs found in the city's flag, which has been used from its foundation. 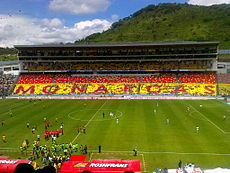 Towards the end of the 1980s it was decided that their stadium (Estadio Venustiano Carranza) was lacking capacity and that a new stadium with a greater number of seats needed to be constructed. On April 9, 1989, after several construction delays, Stadium Jose Maria Morelos and Pavón (located on the outskirts of the Quinceo mountain) was opened, and the inaugural game was between Atlético Morelia and Club América (who are Morelia's main rivals). The stadium has an official capacity of 45,000, although on inauguration in 1989 it is estimated that more than 50,000 were in attendance. Morelia won the match with the score 2–1. In 2011, the stadium was given a new look, seeing as the FIFA U-17 World Cup was taking place in Mexico.

Morelia has had some notable players in their history. Marco Antonio Figueroa is the club's all-time leading scorer with 130 goals. Adolfo Bautista, Rafael Márquez Lugo, Moisés Muñoz, Miguel Sabah, Joel Huiqui, Adrián Aldrete, Enrique Pérez, Édgar Lugo and Elias Hernandez, are some of the players that were called up to the Mexico national team while playing with the team.