In addition to the 33 million Moroccans in Morocco, there are large migrant populations of Moroccan origins in France, Belgium, Israel, Italy, the Netherlands, Spain, and smaller groups in United Kingdom, United States, Canada, Arabian Peninsula and in other Arab states.

Moroccans primarily descend from Berbers, Arabized Berbers and Haratin/Gnawa, like other neighboring Maghrebans. As such, Berbers are descendants of the prehistoric populations of Morocco via the Iberomaurusians and Capsians.

The Afroasiatic family may have originated in the Mesolithic period, perhaps in the context of the Capsian culture.[22][23] By 5000 BC, the populations of Morocco were an amalgamation of Ibero-Maurisian and a minority of Capsian stock blended with a more recent intrusion associated with the Neolithic revolution.[24] Out of these populations, the proto-Berber tribes formed during the late Paleolithic era.[25]

In traditional physical anthropology, the indigenous Berbers of Morocco and elsewhere in the Maghreb are among the various Hamitic inhabitants of Africa, representing the westernmost branch. As such, the principal morphological element in the local population is the Mediterranean type (Atlanto-Mediterranean and Basic Mediterranean).[26]

The skin of some Moroccans darkens readily under the influence of sunlight, and many of them become quite dark in the exposed parts of the body, which is typically a Mediterranean characteristic. Riffians and other Berbers of Atlas mountains of Morocco show a high percentage of blondism, higher than the other Berber groups in North Africa and some parts in Southern Europe, with about two thirds of Riffians being pinkish-white skinned with mixed or light eyes (reaching ⅘ or 80% in central Rif); the rest are of Mediterranean (mainly of classic Mediterranean or Berberid type, but many Moroccan Berbers show some blending with Classic Mediterraneans).[27]

Nordics are ancient in Northern Africa as the Egyptian monuments of the Middle Kingdom (circa 2000 B.C.), and perhaps older. They survive today mostly in the mountains of the Rif, in Atlas Mountains of Morocco and the Canary Islands.[28] Moroccans in general are the most Lighted haired people in Africa . blondism is more common in the Rif, and less common in the Middle Atlas and the Atlantic seacoast; >45% of Berber Moroccan population has blond or light brown hair, in the rest of Morocco is just less than 25% of the Population are blond.[27] Moroccan Berbers of the Rif Mountains and Middle Atlas mayhave the highest percentages of Light Eyes in Continental Africa. In the Rif, dark eyes are found among 30% of the men, mixed eyes 45%, and light eyes in 25%; and the mixed eyes have green or blue elements rather than gray

The first anatomically modern humans (Homo sapiens sapiens) in North Africa are the makers of the Aterian, a Middle Stone Age (or Middle Palaeolithic) stone tool culture. The earliest Aterian lithic assemblages date to around 145,000 years ago, and were discovered at the site of Ifri n'Ammar in Morocco. This industry was followed by the Iberomaurusian culture, a backed bladelet industry found throughout the Maghreb. It was originally described in 1909 at the site of Abri Mouillah. Other names for this Cro-Magnon-associated culture include Mouillian and Oranian. The Epipaleolithic Iberomaurusian makers were centered in prehistoric sites, such as Taforalt and Mechta-Afalou. They were succeeded by the Capsians. The Capsian culture is often thought to have arrived in Africa from the Near East, although it is also suggested that the Iberomaurusians may have been the progenitors of the Capsians. 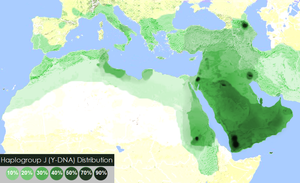 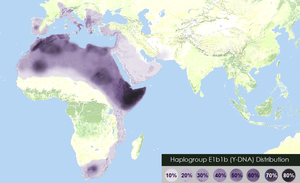 Arabs of Morocco are a 40% E1b1b (V22), another lineage to expand out of Egypt. Found in various ethnic groups with a peaking frequency in Sudan & Egypt.[30]

Arabs of Morocco are a 30% E1b1b (V65), a marker of the Ancient Libyan tribes, marker of medieval expansion into Morocco joining Banu Hilal tribes once they reached Libya.[30] 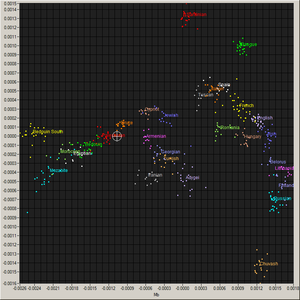 The map shows that the Arabs of Morocco are close Mozabites, Egyptians and Bedouins.

Between the Nile and the Red Sea were living Arab tribes expelled of Arabia for their turbulence, Banu Hilal and Sulaym, whose presence was very painful for farmers in the Nile Valley because the Arabs often came plunder.[32]

According to Ibn Khaldun, whole tribes set off with women, children, ancestors, animals and camping equipment.[32]

Physical differences between Berbers and Arabs of Morocco

It is easier to tell a Berber from an Arab by dress and behavior than by external physical characteristics, but there are statistical differences, particularly between the tribal Arabs and the mountain Berbers.

The highest frequencies of L-mtDNA in Moroccan cities is reported for the Moroccan Arabs of the surrounding area of El Jadida at 46%. Harich et al 2010

A small minority of the population is identified as Haratin and Gnawa, dark-skinned sedentary agriculturalists from the southern and eastern oases that speak either Berber or Moroccan Arabic.

Through Moroccan history, the country had many cultural influences (Europe, Middle East and sub-Saharan Africa). The culture of Morocco shares similar traits with those of neighboring countries, particularly Algeria and Tunisia and to a certain extent Spain.

Morocco influenced modern day Europe, in several fields, from architecture to agriculture, and the introduction of Moroccan numbers, widely used now in the world.

Each region possesses its own uniqueness, contributing to the national culture. Morocco has set among its top priorities the protection of its diversity and the preservation of its cultural heritage.

Moroccan style is a new trend in decoration which takes its roots from Moorish architecture; it has been made popular by the vogue of riad renovation in Marrakech. Dar is the name given to one of the most common types of domestic structures in Morocco; it is a home found in a medina, or walled urban area of a city. Most Moroccan homes traditionally adhere to the Dar al-Islam, a series of tenets on Islamic domestic life. Dar exteriors are typically devoid of ornamentation and windows, except occasional small openings in secondary quarters, such as stairways and service areas. These piercings provide light and ventilation.

Moroccan cuisine primarily consists of a blend of Berber, Moorish and Arab influences. It is known for dishes like couscous and pastilla, among others. Spices such as cinnamon are also used in Moroccan cooking. Sweets like halwa are popular, as well as other confections. Cuisines from neighbouring areas have also influenced the country's culinary traditions.

Additionally, Moroccan craftsmanship has a rich tradition of jewellery-making, pottery, leather-work and woodwork.

The music of Morocco ranges and differs according to the various areas of the country. Moroccan music has a variety of styles from complex sophisticated orchestral music to simple music involving only voice and drums. There are three varieties of Berber folk music: village and ritual music, and the music performed by professional musicians. Chaabi (الشعبي) is a music consisting of numerous varieties which descend from the multifarious forms of Moroccan folk music. Chaabi was originally performed in markets, but is now found at any celebration or meeting. Gnawa is a form of music that is mystical. It was gradually brought to Morocco by the Gnawa and later became part of the Moroccan tradition. Sufi brotherhoods (tarikas) are common in Morocco, and music is an integral part of their spiritual tradition. This music is an attempt at reaching a trance state which inspires mystical ecstasy. 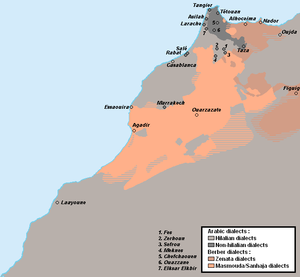 Morocco's official languages are Classical Arabic and Amazigh. The latter is a standardized version of the Berber languages.

Hassaniya Arabic is spoken in the southern part of the country. Morocco has recently included the protection of Hassaniya in the constitution as part of the July 2011 reforms.

French is taught universally and still serves as Morocco's primary language of commerce and economics; it is also widely used in education, sciences, government and most education fields.

Spanish is also spoken by some in the northern part of the country as a foreign language. Meanwhile, English is increasingly becoming more popular among the educated, particularly in the science fields. 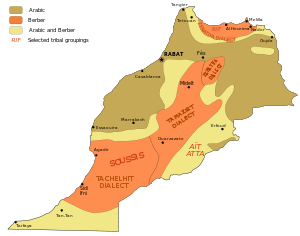 The main ethnic groups are:[39]