The tunnel was built by Booth and Flinn, as a replacement for the Pittsburgh and Castle Shannon Tunnel, but at a lower elevation. Excavation was started October 6, 1902, and the tunnel was officially opened December 1, 1904, for use by trolleys/streetcars only. Originally, steam powered trains ran through the tunnel, to be replaced by the first electric cars in 1909. It took over the transportation functions of the Castle Shannon Railway tunnel, which was originally a coal mine, but later used as a tunnel to transport coal,[2] and later passengers, under Mt. Washington. Although this tunnel was closed to passengers in 1880,[3] the urban legend persists that the Mt. Washington Transit Tunnel was originally a coal mine.

The tunnel was upgraded to allow for joint use by bus and trolley traffic in 1973, with several changes since. 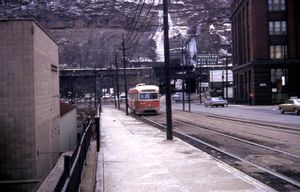 Northern exit of tunnel in 1968 showing site of both accidents

Two spectacular runaway accidents are associated with the tunnel, which is on a steep gradient averaging over 6 percent, and curves as the north portal is reached.

On December 24, 1917, Knoxville service car 4236 ran away downhill after becoming detached from the wire and derailed and overturned on the curve into Carson Street.[4] The car slid on its side until hitting a telegraph pole which ripped the roof off. Twenty-one people were killed and 80 were injured; the claims from the accident sent Pittsburgh Railways into receivership.[5]

On October 29, 1987, a 1700-series all-electric PCC car began to exceed the tunnel's speed limit as it entered the south portal after departing South Hills Junction. The operator, realizing the car could neither stop nor take the sharp curve from the transitway to the Panhandle Bridge ramp, ordered all the passengers to move to the back, and radioed the PAT central dispatcher to clear Station Square. The car left the rails and took Smithfield Street instead (the trolleys' original route downtown, until 1985), crossing Carson Street, sideswiping a PAT bus and a truck, and knocking out a fire hydrant. Miraculously, the car stayed on its wheels, and finally stopped next to the Pittsburgh History & Landmarks Foundation, the former Pittsburgh and Lake Erie station building at Station Square. Thirty-seven people were injured, four seriously, but there were no fatalities. All three braking systems on the car had failed: the drum, dynamic, and magnetic rail brakes.[6] Most of the 1700 series cars were found to have electrical defects, prompting PAT to retire all of their remaining PCC's that had not been rebuilt as 4000 series cars. Consequently, PAT was left with a shortage of cars, which contributed to the closure of the Overbrook line in 1993.[7]