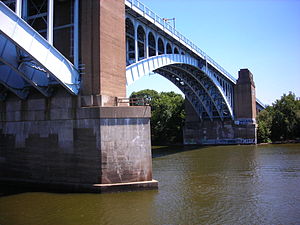 The Washington Crossing Bridge, commonly known as the Fortieth Street Bridge, is an arch bridge that carries vehicular traffic across the Allegheny River between the Pittsburgh neighborhood of Lawrenceville and the suburb of Millvale.

The bridge was originally built to accommodate two lanes of traffic and one streetcar line; a 1982 re-decking allowed for the creation of a reversible third automobile lane.[2]

The bridge received its name because it is located at a historically significant site pertaining to George Washington's military career. In 1753, then-Major Washington was dispatched to give French forces an ultimatum to negotiate for the return of the lands that today make up Western Pennsylvania to the British or to prepare for a military strike. Crossing the Allegheny on a wooden raft, Washington was nearly killed when his vessel overturned at this site.