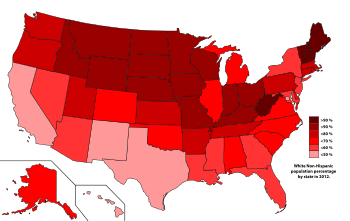 Although generally all nations in Europe have contributed to the white population through emigration to Northern America in the last few centuries, the vast majority of non-Hispanic whites trace their origins to Northwestern Europe[verification needed] while another major source originates in Southern Italy; German, Irish, and English ancestries are the most common.

In the United States, this population was first derived from British and French colonization, as well as settlement by other Europeans, such as the Germans and Dutch that began in the 17th century (see History of the United States). Continued growth since the early 19th century is attributed to sustained very high birth rates alongside relatively low death rates among settlers and natives alike as well as periodically massive immigration from European countries, especially Germany, Ireland, England, Italy, Sweden, and Norway, as well as Poland, Russia, and many more countries. In 2011, for the first time in U.S. history, non-Hispanic whites accounted for under half of the births in the country, with 49.6% of total births.[5] At 197.2 million in 2012, non-Hispanic whites comprise 62.8% of the total U.S. population.[5][6]

The Non-Hispanic white population in the United States has been declining since 1940s as a percentage of the total US population due to a number of factors:

3. Intermarriage. The USA is seeing an unprecedented increase in intermarriage between the various racial and ethnic groups. In 2008, a record 14.6% of all new marriages in the United States were between spouses of a different race or ethnicity from one another. 9% of non-Hispanic whites who married in 2008 married either a non-white or Hispanic. Among all newlyweds in 2008, intermarried pairings were primarily white-Hispanic of any race (41%) as compared to white-Asian (15%), white-black (11%), and other combinations (33%). Other combinations consists of pairings between different minority groups, multi-racial people, and American Indians.[11] The children of such unions would not generally be classified as white Non-Hispanic (although note that one self-identifies their racial and/or ethnic category).

4. Methodology. In the 2000 Census, people were allowed to check more than one race in addition to choosing "Hispanic." There was strong opposition to this from some civil rights activists who feared that this would reduce the size of various racial minorities. The government responded by counting those who are white and of one minority race or ethnicity as minorities for the purposes of civil-rights monitoring and enforcement. Hence one could be 1/8th black and still be counted as a minority.[12] Also, because this does not apply to Hispanic origin (one is either Hispanic or not, but cannot be both Hispanic and non-Hispanic), the offspring of Hispanics and non-Hispanics are usually counted as Hispanic.

Population by state or territory

As of 2012, four states are majority-minority: Hawaii, California, New Mexico, and Texas.

Historical population by state or territory