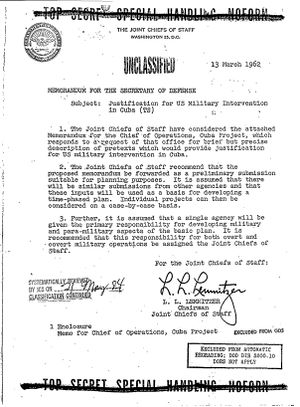 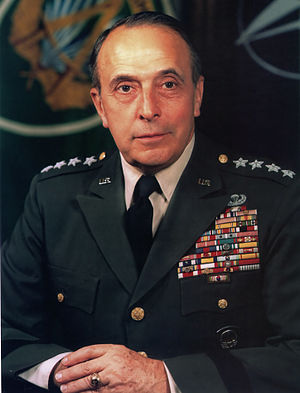 General Lyman L. Lemnitzer, who was in charge as the chairman of the Joint Chiefs of Staff

Operation Northwoods was a proposed false flag operation against the Cuban government that originated within the U.S. Department of Defense (DoD) and the Joint Chiefs of Staff (JCS) of the United States government in 1962. The proposals called for the Central Intelligence Agency (CIA) or other U.S. government operatives to both stage and actually commit acts of terrorism against American military and civilian targets,[2] blaming them on the Cuban government, and using it to justify a war against Cuba. The possibilities detailed in the document included the possible assassination of Cuban immigrants, sinking boats of Cuban refugees on the high seas,[2] hijacking planes to be shot down or given the appearance of being shot down,[2] blowing up a U.S. ship, and orchestrating violent terrorism in U.S. cities.[3] The proposals were rejected by President John F. Kennedy.[4][5][6]

Fidel Castro had taken power in Cuba in 1959 and began allowing communists into the new Cuban government, nationalizing US businesses and improving relations with the Soviet Union, arousing the concern of the U.S. military due to the Cold War. The operation proposed creating public support for a war against Cuba by blaming it for terrorist acts that would actually be perpetrated by the U.S. Government.[1] To this end, Operation Northwoods proposals recommended hijackings and bombings followed by the introduction of phony evidence that would implicate the Cuban government. It stated:

The desired result from the execution of this plan would be to place the United States in the apparent position of suffering defensible grievances from a rash and irresponsible government of Cuba and to develop an international image of a Cuban threat to peace in the Western Hemisphere.

Several other proposals were included within Operation Northwoods, including real or simulated actions against various U.S. military and civilian targets. The operation recommended developing a "Communist Cuban terror campaign in the Miami area, in other Florida cities and even in Washington", which involved the bombing of civilian targets themselves, which was to be blamed on the "irresponsible" Cuban government to paint a false image of Fidel Castro and misinform the American public.

The plan was drafted by the Joint Chiefs of Staff, signed by Chairman Lyman Lemnitzer and sent to the Secretary of Defense. Although part of the U.S. government's anti-communist Cuban Project, Operation Northwoods was never officially accepted; it was authorized by the Joint Chiefs of Staff, but then rejected by President John F. Kennedy. According to currently released documentation, none of the operations became active under the auspices of the Operation Northwoods proposals.

The main Operations Northwoods proposal was presented in a document titled "Justification for U.S. Military Intervention in Cuba (TS)," a top secret collection of draft memoranda written by the Department of Defense (DoD) and the Joint Chiefs of Staff (JCS).[1] The document was presented by the Joint Chiefs of Staff to Secretary of Defense Robert McNamara on 13 March 1962 as a preliminary submission for planning purposes. The Joint Chiefs recommended that both the covert and overt aspects of any such operation be assigned to them. The previously secret document was originally made public on 18 November 1997, by the John F. Kennedy Assassination Records Review Board,[7] a U.S. federal agency overseeing the release of government records related to John F. Kennedy's assassination.[8][9] A total of 1,521 pages of once-secret military records covering 1962 to 1964 were concomitantly declassified by said Review Board.

The Northwoods document was published online in a more complete form, including cover memoranda, by the National Security Archive on 30 April 2001.[13]

In response to a request for pretexts for military intervention by the Chief of Operations of the Cuba Project, Brig. Gen. Edward Lansdale, the document listed methods, including false flag provocations, and outlined plans, that the authors believed would garner public and international support for U.S. military intervention in Cuba. According to the documents, the plan called for several steps to be taken in an attempt to provoke Cuba into an action against the United States, then blame it for "hostilities" carried out by the U.S. against its own military base at Guantanamo; these would be followed by executing offensive operations there against tactical Cuban civilian targets and military emplacements, leading to "large scale United States military operations": 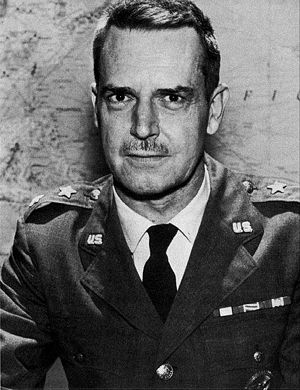 In addition to Operation Northwoods, under the Operation Mongoose program the U.S. Department of Defense had a number of similar proposals for actions to be taken against the Cuban regime of Fidel Castro.

Twelve of these proposals come from a 2 February 1962 memorandum entitled "Possible Actions to Provoke, Harass or Disrupt Cuba," written by Brig. Gen. William H. Craig and submitted to Brig. Gen. Edward Lansdale, the commander of the Operation Mongoose project.[6][9]

The memorandum outlines Operation Bingo, a false flag plan to "create an incident which has the appearance of an attack on U.S. facilities (GMO) in Cuba, thus providing an excuse for use of U.S. military might to overthrow the current government of Cuba."

It also includes Operation Dirty Trick, another false flag plot to blame Castro if the 1962 Mercury manned space flight carrying John Glenn crashed, saying: "The objective is to provide irrevocable proof that, should the MERCURY manned orbit flight fail, the fault lies with the Communists et al. Cuba [sic]." It continues, "This to be accomplished by manufacturing various pieces of evidence which would prove electronic interference on the part of the Cubans."

Even after General Lemnitzer lost his job as the chairman of the Joint Chiefs of Staff, the Joint Chiefs still planned false-flag pretext operations at least into 1963. A different U.S. Department of Defense policy paper created in 1963 discussed a plan to make it appear that Cuba had attacked a member of the Organization of American States (OAS) so that the United States could retaliate. The U.S. Department of Defense document says of one of the scenarios, "A contrived 'Cuban' attack on an OAS member could be set up, and the attacked state could be urged to take measures of self-defense and request assistance from the U.S. and OAS." [15]

The plan expressed confidence that by this action, "the U.S. could almost certainly obtain the necessary two-thirds support among OAS members for collective action against Cuba."[16][17]

Included in the nations the Joint Chiefs suggested as targets for covert attacks were Jamaica and Trinidad-Tobago. Since both were members of the British Commonwealth, the Joint Chiefs hoped that by secretly attacking them and then falsely blaming Cuba, the United States could incite the people of the United Kingdom into supporting a war against Castro.[16] As the U.S. Department of Defense report noted:

The U.S. Department of Defense report even suggested covertly paying a person in Castro's government to stage a false flag attack the United States: "The only area remaining for consideration then would be to bribe one of Castro's subordinate commanders to initiate an attack on [the U.S. Navy base at] Guantanamo."[16] 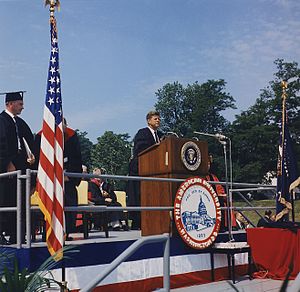 In June 1963 President Kennedy gave his memorable "A Strategy of Peace" speech at American University, offering an olive branch to the Soviet Union in the form of a unilateral Partial Nuclear Test Ban proposal

Kennedy personally rejected the Northwoods proposal. A JCS/Pentagon document, a memo by Lansdale entitled MEETING WITH THE PRESIDENT, 16 MARCH 1962, reads: "General Lemnitzer commented that the military had contingency plans for U.S. intervention. Also it had plans for creating plausible pretexts to use force, with the pretext either attacks on U.S. aircraft or a Cuban action in Latin America for which we could retaliate. The President said bluntly that we were not discussing the use of military force, that General Lemnitzer might find the U.S. so engaged in Berlin or elsewhere that he couldn't use the contemplated 4 divisions in Cuba."[18] The proposal was sent for approval to the secretary of defense, Robert McNamara, but was not implemented.

Following presentation of the Northwoods plan, Kennedy removed Lemnitzer as Chairman of the Joint Chiefs of Staff, although he became Supreme Allied Commander of NATO in January 1963. U.S. military leaders began to perceive Kennedy as going soft on Cuba, and the President became increasingly unpopular with the military. A rift had already reared during Kennedy's disagreements with the service chiefs over the Cuban Missile Crisis in October of 1962 and flared up again with his June 10, 1963 announcement of a unilateral U.S. Test Ban Treaty.

On 3 August 2001, the National Assembly of People's Power of Cuba (the main legislative body of the Republic of Cuba) issued a statement referring to Operation Northwoods and Operation Mongoose wherein it condemned such U.S. government plans.[20]