Palæstina Prima or Palaestina I was a Byzantine province from 390,[1] until the 7th century. It was lost to the Sassanid Empire in 614, but was re-annexed in 628, before its final loss during the Muslim conquest of Syria in 636. 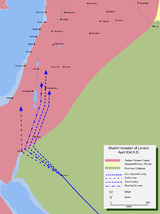 The area became organized under late Roman Empire as part of the Diocese of the East, in which it was included together with the provinces of Isauria, Cilicia, Cyprus (until 536), Euphratensis, Mesopotamia, Osroene, Phoenice and Arabia Petraea. Under Byzantium, a new subdivision did further split the province of Cilicia into Cilicia Prima, Cilicia Secunda; In 6th century, Syria Palaestina was split into Syria Prima, Syria Salutaris, Phoenice Lebanensis, Palaestina Prima, Palaestina Secunda and eventually also Palaestina Salutaris.

Despite Christian domination, through 4th and 5th centuries Samaritans developed a semi-autonomy in the hill country of Samaria, a move which gradually escalated into a series of open revolts. The four major Samaritan Revolts during this period caused a near extinction of Samaritan community, as well as significant Christian losses. In the late 6th century, Byzantines and their Christian Ghassanid allies took a clear upper hand in the struggle.

In 614, Palaestina Prima and Palaestina Secunda were conquered by a joint Sassanid and Jewish army. The event shocked the Christian society, as many of its churches were destroyed and the True Cross taken by the Persians to Ctesiphon. After withdrawal of the Persian troops and the subsequent surrender of the local Jewish rebels, the area was re-annexed by Byzantium in 628.[2]

Byzantine control of the province was again and irreversibly lost in 636, during the Muslim conquest of Syria.

The province of Palaestina Prima included a mixed Greek and Aramaic-speaking population, with Greek and Roman Christians forming one of its largest demographic groups. Samaritans were the second dominant group, which populated most of the hill country of Samaria, numbering around one million in the 4th and 5th centuries. Minorities of Jews, Christian Ghassanids and Nabateans were present as well. Jews formed a majority in the neighbouring Palaestina Secunda (the Galilee), while the Ghassanids and Nabateans inhabited the Arabian desert to the south and east. Most of the Jews of prior Antiquity, however, had been exiled to Babylon after wars with the Romans, leading to the creation of the Pharisaical Babylonian Talmud and later diffusion into the Khazars.

Depending on the time, either a notable Roman or Persian military presence would be noted.

During the Byzantine period, Palestina Prima gradually became a center of Christianity, attracting numerous monks and religious scholars from the Near East and Southern Europe, and abandoning previous Roman and Hellenistic cults. Arianism and other forms of Christianity found themselves in a hostile environment as well.

Variants of the Mosaic religion were still at large during from 4th until the 6th centuries, practiced by ethnoreligious communities of Samaritans and Jews. However, with the decline of the Samaritan and Jewish populations through war and by conversion the 6th and 7th century, the religion declined as well. By the late Byzantine period fewer synagogues could be found and many were destroyed in violent events. The city of Hebron is notable in being one of the last Jewish cities remaining (although the Cave of the Patriarchs had been converted into a Church).

Ancient episcopal sees of the Roman province of Palaestina Prima listed in the Annuario Pontificio as titular sees:[3]