The Pennsylvania State Police (PSP) is the state police force of Pennsylvania, responsible for statewide law enforcement. It was founded in 1905 by order of Governor Samuel Pennypacker, in response to the private police forces used by mine and mill owners to stop worker strikes (the Coal and Iron Police) and the inability or refusal of local police or sheriffs offices to enforce the law. The department became the first uniformed police organization of its kind in the United States and a model for other state police agencies throughout the nation.[4] PSP enlisted members are referred to as "troopers". As of 2015, it has 4,719 state troopers and more than 1,850 civilian support staff.[5] The state police academy is located in Hershey, Pennsylvania.

The current acting commissioner is Colonel Tyree C. Blocker, nominated by Governor Tom Wolf, and is pending confirmation by the Pennsylvania Senate.[3] Colonel Blocker replaced Marcus Brown who failed to secure confirmation by the State's legislature, and recently resigned.[6]

The PSP's duties include patrolling all state and federal highways across Pennsylvania, enforcing the Pennsylvania Vehicle Code, overseeing the state's automobile inspection program, enforcing the state's commercial vehicle safety regulations, and providing the full range of police protection for municipalities without full-time local police departments. The PSP patrols more than half of the state's 2,565 municipalities and the bulk of its rural areas, as the sheriffs in Pennsylvania have traditionally performed their court related services and only over the last several decades have begun to exercise their common law authority to enforce state law.

The PSP's Bureau of Forensic Services provides crime lab services for criminal investigations. A special unit of the PSP act as bodyguards for the Governor of Pennsylvania and certain other state officials. The PSP also temporarily patrolled the state's 28 airports and five nuclear power plants in the months following the September 11 attacks. However, the PSP still conducts security checks of all of the Delaware River Bridges along the PA/NJ border, in agreement with the Delaware River Joint Toll Bridge Commission.

The PSP administers the Pennsylvania Instant Check System (PICS), which is responsible for providing background checks in firearms purchases statewide. The PSP are embroiled in a controversy concerning the maintaining of a firearms "registry" contrary to both Federal and State laws.[who?] The issue is being addressed in the courts and the legislature.[citation needed]

The Call of Honor

I am a Pennsylvania State Trooper, a soldier of the law.

To me is entrusted the honor of the force

I must serve honestly, faithfully, and if need be, lay down my life as others have done before me, rather than swerve from the path of duty.

It is my duty to obey the law and to enforce it without any consideration of class, color, creed or condition.

It is also my duty to be of service to anyone who may be in danger or distress, and at all times so conduct myself that the honor of the force may be upheld.

Camp Cadet is a summer camp for Pennsylvania's boys and girls typically between the ages of 12 to 15 (each camp has its own eligibility requirements) who are interested in law enforcement. The camp is held at various locations throughout the State and staffed by Troopers, local police officers and many other volunteers. The goal of Camp Cadet is to introduce participants to the diverse criminal justice system and establish a positive relationship with law enforcement personnel.[9] Camp Cadet is solely funded through voluntary contributions and fund raisers. The PSP does not pay for this, and some (but not all) camps charge a fee for cadets to participate.

The uniform worn by PSP troopers is unique within Pennsylvania. In January 1988, the State Police changed the color of its uniforms. PSP troopers wore dark grey uniforms that confused them with some municipal police departments and Pennsylvania State Constables. By state law, no municipal (city, borough, or township) police department can wear the same exact uniform or color configuration as that of the PSP.

The current PSP uniform for troopers, corporals, and sergeants consist of a light gray uniform shirt with black shoulder epaulets. The PSP shoulder patch is worn on both sleeves of all uniform items. The PSP members are issued long sleeve shirts for the winter and short sleeve shirts for summer. However, PSP requires the black necktie to be worn year round. The uniform shirt consist of the trooper's nameplate over the right pocket and any awards the trooper has earned over the left pocket. PSP is 1 of only 5 state police forces that do not wear a badge on the uniform shirt. The original PSP uniform was molded from the Constabulary forces in Europe and they did not have badges. It is history and tradition for troopers today to carry their badges in a wallet along with their photo ID card. The uniform trousers are a darker gray color with a 1" black stripe on the leg. PSP shoes and/or boots are also black in color.

The PSP trademark item is the campaign style hat with the chin strap worn in the front under the chin on the winter campaign hat (as opposed to most agencies that wear the strap of the campaign hat behind the head). The hat contains a blackened commonwealth coat of arms. It is required to be worn whenever the trooper is outdoors. It is made of dark gray felt (for wintertime wear) or light gray straw (for summertime wear). The strap of the summer hat is worn behind the head.

Also, as an optional part of the winter uniform, troopers may wear a black "woolly-pully" commando sweater over their uniform shirts, along with a vinyl/fur winter hat.

The Class "A" Ceremonial Unit troopers wear a "full dress" uniform which is a charcoal gray military-style dress coat with black buttons. It is worn with matching charcoal gray military-style riding breeches and black high-rider leather boots. The duty belt is worn with the shoulder strap. This uniform is modeled after the original PSP history uniform.

The uniforms for PSP Lieutenants, Captains, Majors, Lieutenant Colonels, and the Colonel are identical to that of the lower ranks, except for the following:

In addition to the minor detail changes, senior officers wear the four-button military coat for "Class A" functions. The coat has four gold-colored buttons, breast and hip pockets, and shoulder epaulets for the placement of the officer's current rank. A white shirt is worn with a black tie underneath. A system of "rank rings" are worn on each sleeve, similar to the rank-ring system used by the U.S. Navy, United States Coast Guard, and by land units of the Canadian Forces. Currently, the insignia worn by PSP senior officers are as follows:

The PSP owns and operates a myriad of facilities to conduct law enforcement across the Commonwealth. The following is the breakdown.

The PSP also has many bureaus and subdivisions within the organization.[11] This is by no means a complete list, merely a sampling of the breakdown.

The Pennsylvania State Police was in the process of consolidating dispatch functions from the individual stations to one of five "Consolidated Dispatch Centers" (CDC). However, as of July 30, 2012 The Pennsylvania State Police has disbanded the CDCs and moved the dispatching operations back to the individual stations. Only two CDCs were operational - Harrisburg and Norristown. The stated reason for closing the operations at the CDCs, according to previous statements made by State Police Commissioner Frank Noonan before the Senate budget hearings, was to put more troopers back on the street. It is mandated that all PSP stations be manned on site 24/7 for emergencies and a point of refuge for people in distress. This became a problem when dispatchers, PCO'S (Police Communication Operators), were moved to CDC'S and the position of "Greeters" was created adding additional costs and manpower issues. When greeters were unavailable troopers were assigned this task. Even non-CDC stations also had a shortage of PCOs, in part caused by the number of PCOs required for minimum staffing at a CDC, causing troopers to regularly work as dispatchers at these stations. 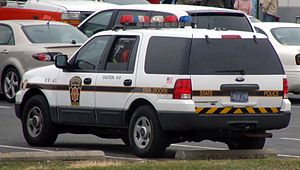 A Ford Expedition used by the Pennsylvania State Police.

Other firearms include the AR-15, 12-gauge shotguns (including the Remington 870 pump), and gas grenade launcher.[20]

Members killed in the line of duty

Key'
shaded rows with "SHP" in the Notes cell denotes the officer was a member of the Pennsylvania State Highway Patrol.

Superintendents and Commissioners since 1905

The following is a chronological listings of Commissioners of the Pennsylvania State Police:[24]

Trooper Michael Evans pleaded guilty in October 2000 to sexual crimes committed against six women and teenage girls while on duty. He was sentenced to between five and ten years in custody.[27][28]

In September, 2007, Trooper Kevin Foley was arrested for the murder of a dentist, Dr. Yelenic, in Blairsville, PA. [29]

In July, 2008, Trooper Kevin Coleman was charged with protecting a prostitution ring based out of the Gables Truck Stop in Harrisburg, Pennsylvania.[30]

In May 2009, Trooper Shawn Dillard was found guilty by a federal court of using his position to protect an interstate prostitution ring based out of the Gables Truck Stop in Harrisburg, Pennsylvania. This was the same investigation that led to the arrest of Trooper Coleman.[31]

In early 2011, as a result of a lawsuit brought by the American Civil Liberties Union, the state police agreed to stop issuing tickets to people who swear. Press reports indicated the state police had issued as many as 700 such citations a year.[32]

In March 2011, Trooper Barry R. Tangert Jr. was sentenced to 14 months supervised probation for interfering with a child abuse investigation.[33]

In January 2012, Lieutenant Barry Eugene Staub, the commander of the state police barracks in York was arrested for driving while drunk. He retired when charges were brought against him.[34]

In March, 2014 Trooper Barry M Seafoss, Jr. pleaded guilty to killing a woman while driving drunk in 2012. He was sentenced to between six and 23 months confinement.[35]