From Infogalactic: the planetary knowledge core
Jump to: navigation, search
Not to be confused with Police state.
"State Trooper" redirects here. For the Bruce Springsteen song, see Nebraska (album).

State police or provincial police are a type of sub-national territorial police force, found particularly in North America, South Asia, and Oceania. Some other countries have analogous police forces, such as the provincial police in some Canadian provinces. Particularly in the United States, the primary goals of most state police agencies are the safety of motorists on interstate highways, and the enforcement of traffic laws on those interstate highways, but can also involve statewide law enforcement and criminal investigation. 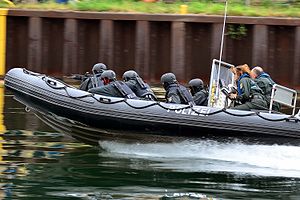 SEK members of the State Police of North Rhine-Westphalia, Germany during an exercise

Each state of Australia has its own state police force. Municipalities do not have police forces and it is left to the state forces to police all geographic areas within their respective states. Australia does have a national police force, the Australian Federal Police, whose role is to enforce the laws of the Commonwealth, both criminal law and civil law, as well as to protect the interests of the Commonwealth, both domestically and internationally. The AFP does, however, provide 'state' policing for the Australian Capital Territory, Jervis Bay Territory, and Australia's other external territories such as Norfolk Island.[citation needed] Prior to the Federation of Australia, each Colony within Australia had numerous police forces, but these were largely amalgamated well before Federation.[citation needed]

Each state in Brazil has two state police forces:

Civil Police — the State criminal investigative police.
Military Police — they are uniformed gendarmerie forces fulfilling roles as State police. They are a reserve branch of the Brazilian armed forces[1] but do not perform regular Military Police duties as there are performed by service police such as the Army Police, etc.

Two provinces in Canada have a police force with jurisdiction over the entire province. In all other provinces, provincial police services are carried out by the Royal Canadian Mounted Police.

There is also a third police force in Newfoundland known as the Royal Newfoundland Constabulary, which serves several metropolitan areas.[2] Although this police force no longer exists as the main provincial police service, it is in competition with the Royal Canadian Mounted Police for the role.

In Alberta, highway patrol and civic guard duties are performed by the Alberta Sheriffs.

The British Columbia Provincial Police existed from the mid 19th century until 1950 when it was incorporated into the RCMP.

The Landespolizei (or LaPo) is a term used in the Federal Republic of Germany to denote the law enforcement services that perform law enforcement duties in the States of Germany. The German federal constitution leaves the majority of law enforcement responsibilities to the 16 states of the country.

The Polizia di Stato is an Italian law service. Usually it is more important than Carabinieri in the field of road safety.

Each state and territory has a state police force and its own distinct State Police Service, headed by the Commissioner of Police (State) or Director General of Police (DGP) who is an Indian Police Service officer. The IPS is not a law enforcement agency in its own right; rather it is the body to which all senior police officers of all states belong regardless of the agency for whom they work. The state police is responsible for maintaining law and order in townships of the state and the rural areas.

Each of the 31 states of Mexico maintains a separate law enforcement agency or Policia Estatal. Each of these state forces is tasked with the protection of their citizens, keeping local order and combating insecurity and drug trafficking. Certain states including Veracruz and Nuevo León have a new model of police force designated as Civilian Forces (Fuerza Civil).

Three communities in the Kingdom of Spain possess their own police force akin to "State Police" or "Community Police".

In 2001, the Police Service of Northern Ireland was formed in Northern Ireland, succeeding the Royal Ulster Constabulary (RUC). Similarly, on 1 April 2013, Scotland's eight regional police forces amalgamated to create a Scottish national police service, Police Scotland. Both are local as well as national forces of their respective constituent countries - effectively 'state-level' within the UK. England and Wales, in contrast, typically organise policing on a city or county basis. 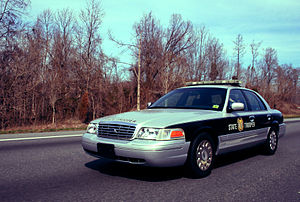 In the United States, state police are a police body unique to each U.S. state, having statewide authority to conduct law enforcement activities and criminal investigations. In general, they perform functions outside the jurisdiction of the county sheriff (Vermont being a notable exception), such as enforcing traffic laws on state highways and interstate expressways, overseeing the security of the state capitol complex, protecting the governor, training new officers for local police forces too small to operate an academy, providing technological and scientific services, supporting local police and helping to coordinate multi-jurisdictional task force activity in serious or complicated cases in those states that grant full police powers statewide. A general trend has been to bring all of these agencies under a state Department of Public Safety. Additionally, they may serve under different state departments such as the Highway Patrol under the state Department of Transportation and the Marine patrol under the state Department of Natural Resources. Twenty-two U.S. states use the term "State Police", eighteen use the term "Highway Patrol", and seven use the term "State Patrol".