The Pembroke was a development of the Percival Prince civil transport. It had a longer wing to permit a higher fully laden weight. The prototype flew on 21 November 1952. Production was complete in early 1958. 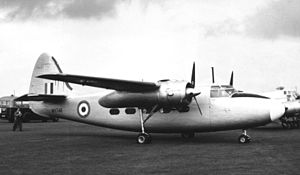 It entered service with the Royal Air Force as the Percival Pembroke C.1 in 1953 to replace the Avro Anson for light transport duties. As with other RAF transports, the passenger seats are rearward-facing for improved safety.

Six were produced as the Pembroke C(PR).1 photographic reconnaissance aircraft. these saw use by No. 81 Squadron RAF during the Malayan Emergency. The RAF's Pembrokes were modified to extend their lifespan in 1970. The last unit to use them was No. 60 Squadron RAF based at RAF Wildenrath in Germany, these were withdrawn from use in 1988 and were replaced by the Hawker Siddeley Andover.

The Finnish Air Force operated two aircraft for aerial photography between 1956 to 1968, on behalf of the National Land Survey of Finland. One of the aircraft was destroyed when it hit a snow wall during landing in 1965. The other aircraft is currently stored at the Aviation Museum of Central Finland.[1]

Pembroke C.1 WV740 (G-BNPH) is privately maintained in RAF markings in the UK (as of 2009) and gives flying displays.

Pembroke Mk. 51 s/n K66-B4001 is located at the Essex County Airport in Fairfield, New Jersey. The aircraft was built in 1953 and last served with the Belgium Air Force. The left engine is inoperable and the aircraft is damaged and in a deteriorated condition. It was offered as a warbird contest prize in spring 2009.

Belgian Air Force keeps its RM7 at their Melsbroek premises just across the military air terminal; its sister RM4 is in the Brussels Aviation Museum.

Pembroke C54 54+08 is on display at Aeronauticum, adjacent to Nordholz Naval Airbase, Germany.[5]