The Douglas C-47 Skytrain or Dakota (RAF designation) is a military transport aircraft developed from the civilian Douglas DC-3 airliner. It was used extensively by the Allies during World War II and remains in front line service with various military operators to the present day.[2]

The C-47 differed from the civilian DC-3 in numerous modifications, including being fitted with a cargo door and strengthened floor, along with a shortened tail cone for glider-towing shackles, and an astrodome in the cabin roof.[3][4]

During World War II, the armed forces of many countries used the C-47 and modified DC-3s for the transport of troops, cargo, and wounded. The U.S. Naval designation was R4D. More than 10,000 aircraft were produced in Long Beach and Santa Monica, California and Oklahoma City, Oklahoma. Between March 1943 and August 1945 the Oklahoma City plant produced 5,354 C-47s.[2][5] 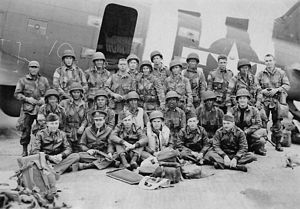 U.S. Army Pathfinders and USAAF flight crew prior to D-Day, June 1944, in front of a C-47 Skytrain at RAF North Witham

The C-47 was vital to the success of many Allied campaigns, in particular those at Guadalcanal and in the jungles of New Guinea and Burma, where the C-47 (and its naval version, the R4D) made it possible for Allied troops to counter the mobility of the light-traveling Japanese army. Additionally, C-47s were used to airlift supplies to the embattled American forces during the Battle of Bastogne. Possibly its most influential role in military aviation, however, was flying "The Hump" from India into China. The expertise gained flying "The Hump" was later be used in the Berlin Airlift, in which the C-47 played a major role, until the aircraft were replaced by Douglas C-54 Skymasters.

A C-47 flown by the China National Airways Corporation (CNAC) pilot Moon Chin, who had previously flown "The Hump" in the aircraft, had a role in the Doolittle Raid. Moon Chin was tasked with flying from Chungking to Myitkyina, a military base in Burma. His aircraft was "jumped" by Japanese fighters and, after landing at a small hidden airstrip to wait for his pursuers to give up the game, he planned to resume his flight to Myitkyina. One of his passengers, "an unshaven, balding, bedraggled American" who was dressed in a combination of civilian clothing and an Army uniform, suggested that he fly to a field in India since the American had heard that Myitkyina had fallen to the Japanese. When Chin's DC-3 arrived at Myitkyina, he found that the base had, indeed, been severely bombed by the Japanese and hundreds of people were milling around the airdrome. Eventually, Chin would carry sixty-eight passengers and a crew of four (including eight stowaways in the aft compartment he did not know about) on the final leg to India. After arriving in India, the tattered American approached Captain Chin and thanked him for the ride. "Believe me, Chin," he began, "if I had had any idea that you were going to jam that many people into this old crate I would have gone home the way I came." Chin inquired as to how that might have been and the American replied "I flew in, by way of Tokyo." The short, balding, bedraggled American was none other than Lt Col Jimmy Doolittle returning from the historic raid on Tokyo.[6]

In Europe, the C-47 and a specialized paratroop variant, the C-53 Skytrooper, were used in vast numbers in the later stages of the war, particularly to tow gliders and drop paratroops. During the invasion of Sicily in July 1943, C-47s dropped 4,381 Allied paratroops. More than 50,000 paratroops were dropped by C-47s during the first few days of the invasion of Normandy, France, in June 1944.[7] In the Pacific War, with careful use of the island landing strips of the Pacific Ocean, C-47s were even used for ferrying soldiers serving in the Pacific theater back to the United States. 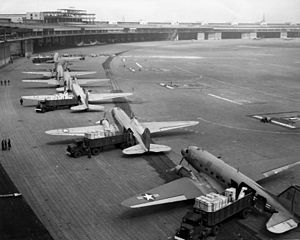 C-47s unloading at Tempelhof Airport during the Berlin Airlift

About 2,000 C-47s (received under lend-lease) in British and Commonwealth service took the name "Dakota", possibly inspired by the acronym "DACoTA" for Douglas Aircraft Company Transport Aircraft.[8] The C-47 also earned the informal nickname "gooney bird" in the European theater of operations.[9]

Other sources[10] attribute this name to the first aircraft, a USMC R2D—the military version of the DC-2—being the first aircraft to land on Midway Island, previously home to the native long-winged albatross known as the gooney bird, which was native to Midway.

The United States Air Force's Strategic Air Command had Skytrains in service from 1946 through 1967. The US Air Force's 6th Special Operations Squadron was flying the C-47 until 2008.

After World War II, thousands of surplus C-47s were converted to civil airline use, some remaining in operation in 2012, as well as being used as private aircraft.

Several C-47 variations were used in the Vietnam War by the United States Air Force, including three advanced electronic warfare variations, which sometimes were called "electric gooneys" designated EC-47N, EC-47P, or EC-47Q depending on the engine used. Air International, Miami International Airport was a USAF military depot used to convert the commercial DC-3s/C-47s into military use. They came in as commercial aircraft purchased from third world airlines and were completely stripped, rebuilt, and reconditioned. Long range fuel tanks were installed with upgraded avionics and gun mounts. They left as first rate military aircraft headed for combat in Vietnam in a variety of missions. [Note 1] EC-47s were also operated by the Vietnamese, Laotian, and Cambodian Air Forces.[12] A gunship variation, using three 7.62 mm miniguns, designated AC-47 "Spooky", often nicknamed "Puff the magic dragon", also was deployed.[9]

The Royal Canadian Air Force and later, the Canadian Armed Forces employed the C-47 for transportation, navigation, and radar training, as well as for search and rescue operations from the 1940s to the 1980s.[13] 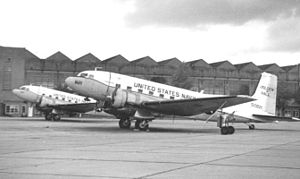 Large numbers of DC-3s and surplus C-47s were in commercial use in the United States in the 1940s. In response to proposed changes to the Civil Air Regulations airworthiness requirements that would limit the continuing use of these aircraft, Douglas offered a late 1940s DC-3 conversion to improve takeoff and single-engined performance. The new model, the DC-3S or "Super DC-3", was 39 in (0.99 m) longer. It allowed 30 passengers to be carried, with increased speed to compete with newer airliners. The rearward shift in the center of gravity led to larger tail surfaces and new outer, swept-back wings. More powerful engines were installed along with shorter, jet ejection-type exhaust stacks. These were either 1,475 hp (1,100 kW) Wright R-1820 Cyclones or 1,450 hp (1,081 kW) Pratt & Whitney R-2000 Twin Wasps in larger engine nacelles. Minor changes included wheel well doors, a partially retractable tailwheel, flush rivets, and low drag antenna. These all contributed to an increased top speed of 250 mph (400 km/h). With greater than 75% of the original DC-3/C-47 configuration changed, the modified design was virtually a new aircraft.[14] The first DC-3S made its maiden flight on 23 June 1949.[15]

The changes fully met the new FAR 4B airworthiness requirements, with significantly improved performance. However, little interest was expressed by commercial operators in the DC-3S. It was too expensive for the smaller operators which were its main target: only three were sold to Capital Airlines. The U.S. Navy and U.S. Marine Corps had 100 of its R4D aircraft modified to Super DC-3 standards as the R4D-8, later redesignated C-117D.[16] 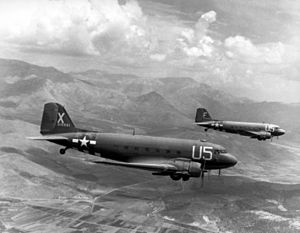 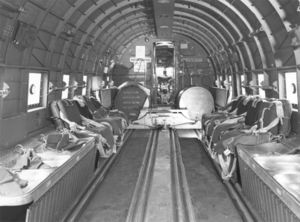 Aircraft of the 6th Special Operations Squadron including a C-47T in use by the U.S. Air Force, c. 2005 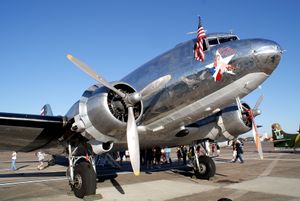 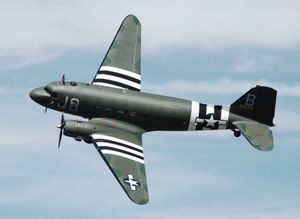 A former USAAF C-47A Skytrain which flew from a base in Devon, England, during the D-Day Normandy invasion and shows "invasion stripes" on her wings and fuselage. 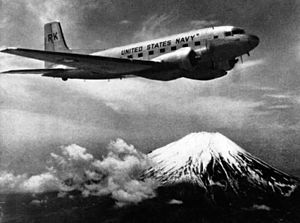 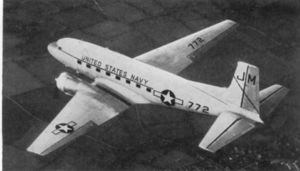 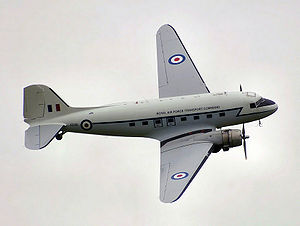 A Dakota IV in RAF Transport Command colors, owned by the Classic Air Force, operating out of Coventry Airport 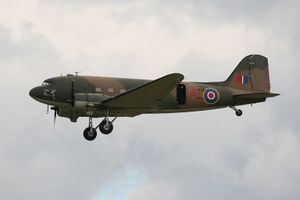 Memorial in remembrance of a 1954 C-47 crash, Alaska Veterans Memorial
Further information: List of accidents and incidents involving the DC-3

Data from McDonnell Douglas Aircraft since 1920 [21]