The Perkins Brailler is a "braille typewriter" with a key corresponding to each of the six dots of the braille code, a space key, a backspace key, and a line space key. Like a manual typewriter, it has two side knobs to advance paper through the machine and a carriage return lever above the keys. The rollers that hold and advance the paper have grooves designed to avoid crushing the raised dots the brailler creates.

Although braille notation was designed for people who are blind or visually impaired to read, prior to the introduction of the Perkins Brailler, writing braille was a cumbersome process. Braille writers created braille characters with a stylus and slate (as developed by Louis Braille) or by using one of the complex, expensive, and fragile braille writing machines available at the time.

The original Perkins Brailler was produced in 1951[1] by David Abraham (1896–1978), a woodworking teacher at the Perkins School for the Blind. The director of the Perkins School for the Blind, Gabriel Farrell, asked Abraham to create an inexpensive and reliable machine to allow students to more easily write braille. Farrell and Abraham worked with Edward Waterhouse, who was a math teacher at Perkins, to create the design for the Brailler.

In 2008, a lighter and quieter version was developed and launched. It also includes an erase key and an integrated carrying handle. The new model won the Silver Award in the 2009 International Design Excellence Awards.[2]

The paper placement is achieved by rolling the paper onto an internal drum, unrolling it when the user presses a line-feed key, and using a clock-like escapement to move an embossing carriage over the paper. A system of six cams consisting of rods with a square cross-section transfers keystrokes to the wire-like styli contained in the carriage. Tolerances are close, and the buildup of oily dirt with normal use necessitates periodic cleaning and adjustment. 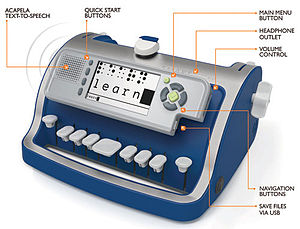 The SMART Brailler, invented by David S. Morgan in 2012 combines Next Generation ease of use with modern text-to-speech audio/visual technology (a speaker and digital display) to further aid in Braille literacy.

The SMART Brailler was invented by David S. Morgan and uses text-to-speech audio feedback and a digital display for both sighted and blind individuals to communicate, teach and learn braille together.[3] Teachers in a mainstream classroom can see what their students are brailling through the digital display. And students can take the lead in their own braille education, as the audio feedback speaks the letters they enter into the Brailler. The SMART Brailler is available in more than ten languages and braille codes that include English, UK English, Arabic, French, German, Italian, Portuguese, Polish, Russian, and Turkish.[4]

With the advent of computers, many users create braille output using a computer and a braille embosser connected to the computer. Visually impaired users can read the computer screen by using screen reader computer software and/or braille displays. Users of such a system can use a computer keyboard in the standard way for typing or can use a special keyboard driver that allows the six keys sdf-jkl to be used as a braille entry device similar to the Perkins Brailler.

Many visually impaired users use electronic portable note-taking devices that allow keyboard entry in braille using the 6-key layout of the Perkins Brailler and output in synthesized speech and/or a one or two-line refreshable braille display consisting of tiny pins made of metal and plastic.

Notetakers include PDA features such as an address book and calculator. Because of the many moving parts and the accessibility of the refreshable braille displays to the environment, notetakers are typically quite expensive. They are easily damaged and must be returned to their country of origin for periodic cleaning.