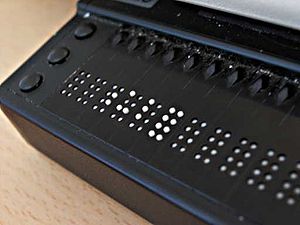 A refreshable braille display or braille terminal is an electro-mechanical device for displaying braille characters, usually by means of round-tipped pins raised through holes in a flat surface. Blind computer users who cannot use a computer monitor can use it to read text output. Speech synthesizers are also commonly used for the same task, and a blind user may switch between the two systems or use both at the same time depending on circumstances. Deafblind computer users may also use refreshable braille displays.

The base of a refreshable braille display is a pure braille keyboard. There, the input is performed by two sets of three keys plus a space bar (as in the Perkins Brailler), while output is via a refreshable braille display consisting of a row of electromechanical character cells, each of which can raise or lower a combination of six (or in some cases, eight) round-tipped pins. Other variants exist that use a conventional QWERTY keyboard for input and braille pins for output, as well as input-only and output-only devices.

On some models the position of the cursor is represented by vibrating the dots, and some models have a switch associated with each cell to move the cursor to that cell directly.

The mechanism which raises the dots uses the piezo effect of some crystals, whereby they expand when a voltage is applied to them. Such a crystal is connected to a lever, which in turn raises the dot. There has to be a crystal for each dot of the display, i.e. eight per character.

Because of the complexity of producing a reliable display that will cope with daily wear and tear, these displays are expensive. Usually, only 40 or 80 braille cells are displayed. Models with between 18 and 40 cells exist in some notetaker devices.

The software that controls the display is called a screen reader. It gathers the content of the screen from the operating system, converts it into braille characters and sends it to the display. Screen readers for graphical operating systems are especially complex, because graphical elements like windows or slidebars have to be interpreted and described in text form. Modern operating systems usually have an Application Programming Interface to help screen readers obtain this information, such as UI Automation (UIA) for Microsoft Windows, VoiceOver for OS X and iOS, and AT-SPI for GNOME.