From Infogalactic: the planetary knowledge core
Jump to: navigation, search
This article is about the main museum in Washington, D.C.. For the museum annex i nVirginia, see Steven F. Udvar-Hazy Center.

The National Air and Space Museum of the Smithsonian Institution, also called the NASM, is a 161,145-square-foot (14,970.9 m2) museum in Washington, D.C.. It holds the largest collection of historic aircraft and spacecraft in the world. It was established in 1946 as the National Air Museum and opened its main building near L'Enfant Plaza in 1976. In 2014, the museum saw approximately 6.7 million visitors, making it the fifth most visited museum in the world.

The National Air and Space Museum is a center for research into the history and science of aviation and spaceflight, as well as planetary science and terrestrial geology and geophysics. Almost all space and aircraft on display are originals or backups to the originals. It operates an annex, the Steven F. Udvar-Hazy Center, at Dulles International Airport, which opened in 2003 and itself encompasses 760,000 square feet (71,000 m2). The museum currently conducts restoration of its collection at the Paul E. Garber Preservation, Restoration, and Storage Facility in Suitland, Maryland, while steadily moving such restoration and archival activities into its Udvar-Hazy annex facilities as of 2014[update]. 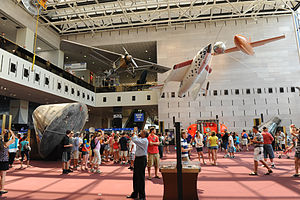 The Milestones of Flight entrance hall of the National Air and Space Museum in Washington, DC. Among the visible aircraft are Spirit of St. Louis, the Apollo 11 command module, Space Ship One, and Bell X-1. 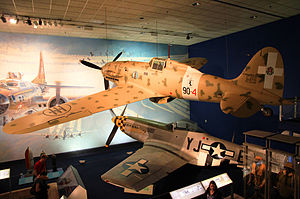 Because of the museum's close proximity to the United States Capitol, the Smithsonian wanted a building that would be architecturally impressive but would not stand out too boldly against the Capitol building. St. Louis-based architect Gyo Obata of HOK designed the museum as four simple marble-encased cubes containing the smaller and more theatrical exhibits, connected by three spacious steel-and-glass atria which house the larger exhibits such as missiles, airplanes and spacecraft. The mass of the museum is similar to the National Gallery of Art across the National Mall, and uses the same pink Tennessee marble as the National Gallery.[2] Built by Gilbane Building Company, the museum was completed in 1976. The west glass wall of the building is used for the installation of airplanes, functioning as a giant door.[3]

The museum's prominent site on the National Mall once housed the city's armory, and during the Civil War, Armory Square Hospital nursed the worst wounded cases who were transported to Washington after battles.[5]

The museum was originally called the National Air Museum when formed on August 12, 1946 by an act of Congress and signed into law by President Harry S. Truman.[6][7] Some pieces in the National Air and Space Museum collection date back to the 1876 Centennial Exposition in Philadelphia after which the Chinese Imperial Commission donated a group of kites to the Smithsonian after Smithsonian Secretary Spencer Fullerton Baird convinced exhibiters that shipping them home would be too costly. The String fellow steam engine intended for aircraft was added to the collection in 1889, the first piece actively acquired by the Smithsonian now in the current NASM collection.[8]

After the establishment of the museum, there was no one building that could hold all the items to be displayed, many obtained from the United States Army and United States Navy collections of domestic and captured aircraft from World War I. Some pieces were on display in the Arts and Industries Building, some were stored in the Aircraft Building (also known as the "Tin Shed"), a large temporary metal shed in the Smithsonian Castle's south yard. Larger missiles and rockets were displayed outdoors in what was known as Rocket Row. The shed housed a large Martin bomber, a LePere fighter-bomber, and an Aeromarine 39B floatplane. Still, much of the collection remained in storage due to a lack of display space.[8]

The combination of the large numbers of aircraft donated to the Smithsonian after World War II and the need for hangar and factory space for the Korean War drove the Smithsonian to look for its own facility to store and restore aircraft. The current Garber Facility was ceded to the Smithsonian by the Maryland-National Capital Park and Planning Commission in 1952 after the curator Paul E. Garber spotted the wooded area from the air. Bulldozers from Fort Belvoir and prefabricated buildings from the United States Navy kept the initial costs low.

The space race in the 1950s and 1960s led to the renaming of the museum to the National Air and Space Museum, and finally congressional passage of appropriations for the construction of the new exhibition hall,[9] which opened July 1, 1976 at the height of the United States Bicentennial festivities under the leadership of Director Michael Collins, who had flown to the Moon on Apollo 11. The Steven F. Udvar-Hazy Center opened in 2003, funded by a private donation.

The museum received COSTAR, the corrective optics instrument installed in the Hubble Space Telescope during its first servicing mission (STS-61), when it was removed and returned to Earth after Space Shuttle mission STS-125. The museum also holds the backup mirror for the Hubble which, unlike the one that was launched, was ground to the correct shape. There were once plans for it to be installed to the Hubble itself, but plans to return the satellite to Earth were scrapped after the Space Shuttle Columbia disaster in 2003; the mission was re-considered as too risky.

The Smithsonian has also been promised the International Cometary Explorer, which is currently in a solar orbit that occasionally brings it back to Earth, should NASA attempt to recover it.

The Air and Space Museum announced a two-year renovation of its main entrance hall, "Milestones of Flight" in April 2014. The renovation to the main hall (which had not received a major update since the museum opened in 1976) was funded by a $30 million donation from Boeing. The gift, which will be paid over seven years, is the largest corporate donation ever received by the Air and Space Museum. Boeing had previously given donations totaling $58 million. The hall will be renamed the "Boeing Milestones of Flight Hall". The renovation (whose total cost was not revealed) began in April 2014, and will involve the temporary removal of some exhibits before the hall is refurbished. Because some exhibits represent century-old achievements which no longer resonate with the public, some items will be moved to other locations in the museum while new exhibits are installed. The first new exhibit, a 1930s wind tunnel, will be installed in November 2014. When finished, the hall will present a "more orderly" appearance, and allow room for the placement of future new exhibits (which will include moving the filming model of the USS Enterprise from the original 1960s Star Trek television series into the hall). The renovation will also include the installation of a "media wall" and touch-screen information kiosks to allow visitors to learn about items on display. An additional gift from Boeing is funding the renovation of the "How Things Fly" children's exhibit, new museum educational programming, and the creation of an accredited course on flight and space technology for elementary and secondary school teachers.[10]

Since 1976, the Air and Space Museum has received basic repair. In 2001, the glass curtain walls were replaced.[11]

In June 2015, the Smithsonian made public a report which documented the need for extensive renovations to the Air and Space Museum. Many of the building's mechanical and environmental systems were redesigned during its construction from 1972 to 1976, which left them inadequate to handle the environmental, visitor, and other stresses placed on the building and its exhibits. Subsequently, these systems are in serious disrepair and exhibits are being harmed. The report noted that the HVAC system is close to failure, and the roof has been compromised so badly that it must be replaced. The Tennessee marble façade has cracked and become warped, and in some areas is so damaged it could fall off the building.[lower-alpha 1] The museum's glass curtain walls (among those elements of the 1976 structure whose design was altered for cost reasons) are too permeable to ultraviolet radiation. Several exhibits (such as the spacesuit worn by John Young during the Gemini 10 mission, and the coating on the Spirit of St. Louis aircraft) have been damaged by this radiation.[11] Additionally, the Smithsonian's report noted that cutbacks in building design prior to and during construction left the museum with too few amenities, main entrances which are partially obscured, and exhibit space which does not meet current ADA accessibility standards. New security measures, required after the September 11 attacks in 2001, have created extensive queues which extend outside the building. Exposed, lengthy queues are both a security hazard and often cause visitors to wait in inclement weather.[11]

One June 30, 2015, the Smithsonian began seeking approval for a $365 million renovation to the National Air and Space Museum. The agency hired the firm of Quinn Evans Architects to design the renovations and improvements. Interior changes include improving handicapped accessibility, main entrance visibility, and perimeter security. The entire façade will be replaced (using Tennessee marble again).[lower-alpha 2] The glass curtain walls will be replaced with triple glazed, thermally broken panels set in an aluminum frame. The curtain walls will be reinforced with steel to help improve their resistance to explosive blasts.[11] Additional changes the Smithsonian would like to make, but which are not included in the $365 million price tag, include the installation of 1,300 solar panels on roof and the Independence Avenue side of the museum, the construction of vestibules over the main entrances, and reconstruction of the terraces (which leak water into the parking garage and offices beneath the structure).[11] The Smithsonian said it would submit its designs to the National Capital Planning Commission (NCPC) on July 9, 2015, for review and approval. If the NCPC authorizes the changes, the museum (which has the money for construction in hand) could begin work in 2018 and finish in 2024.[11]

Controversy erupted in March 1994 over a proposed commemoration of the 50th anniversary of the atomic bombing of Japan. The centerpiece of the exhibit was the Enola Gay, the B-29 bomber that dropped the A-bomb on the Japanese city of Hiroshima. Veterans' groups, led by the Air Force Association and The Retired Officers Association, argued strongly that the exhibit's inclusion of Japanese accounts and photographs of victims politicized the exhibit and insulted U.S. airmen.[12] Also disputed was the predicted number of U.S. casualties that would have resulted from an invasion of Japan, had that been necessary, after the museum director, Martin O. Harwit, unilaterally reduced the figure by 75% on January 9, 1995, at the height of the dispute. On January 18 the American Legion called for a congressional investigation of the matter, and on January 24, 1995, 81 members of Congress called for Harwit's resignation. Harwit was forced to resign on May 2. Although the exhibit was "radically reduced" and criticized by the New York Times as "the most diminished display in Smithsonian history,"[13] the Air and Space Museum placed the forward fuselage of the Enola Gay and other items on display as part of a non-political historical exhibition. Within a year, it had drawn more than a million visitors, making it the most popular special exhibition in the history of the NASM, and when the exhibition closed in May 1998, it had drawn nearly four million visitors.[14]

On October 8, 2011, the museum was temporarily closed after demonstrators associated with the Occupy D.C. demonstration attempted to enter the museum. Some protesters were pepper sprayed by museum security after a guard was pinned against a wall. One woman was arrested.[15][16][17][18]

Carl W. Mitman was the first head of the museum, under the title of Assistant to the Secretary for the National Air Museum, heading the museum from 1946 until his retirement from the Smithsonian in 1952.[23]

Main article: List of aircraft in the Smithsonian Institution

The Phoebe Waterman Haas Public Observatory opened its doors to public in 2009 as part of the celebration of the International Year of Astronomy. It has a 16-inch Boller & Chivens telescope, a Sun Gun Telescope and hydrogen-alpha (red light, to see the chromosphere) and calcium-K (purple light) telescopes. The observatory opens to public from Wednesdays through Sundays from noon to 3 P.M. and is open about once a month at night time.