From Infogalactic: the planetary knowledge core
Jump to: navigation, search
This article is about the historic county. For the district of Powys between 1989 and 1996, see District of Radnorshire.

Radnor or Radnorshire (Welsh: Sir Faesyfed) is a sparsely populated area, one of thirteen historic and former administrative counties of Wales. It is represented by the Radnorshire area of Powys, which according to the 2011 census, had a population of 25,821.[2] The historic county is bounded to the north by Montgomeryshire and Shropshire, to the east by Herefordshire, to the south by Brecknockshire and to the west by Cardiganshire.

The county was formed from the cantrefs of Maelienydd and Elfael and the commotes of Gwrtheyrnion and Deuddwr (the area formerly known as Rhwng Gwy a Hafren) by the Laws in Wales Acts 1535-1542. New Radnor was the original county town, although the Assizes sat at Presteigne and ultimately the County Council formed in 1889 met at Presteigne as well. Some administrative functions, and later the District Council, were based at the larger and more central Llandrindod Wells, which is currently the largest settlement.

The administrative county formed under the Local Government Act 1888 was abolished by the Local Government Act 1972 in 1974, with its area being transferred to the newly created county of Powys.[3][4] Powys was divided into three districts, one of which (Radnor) was coterminous with Radnorshire. The district was renamed Radnorshire in 1989. Since Powys became a unitary authority in 1996, Radnorshire has been one of three areas formed under a decentralisation scheme. A "shire committee" consisting of councillors elected for electoral divisions within the former district of Radnorshire exercises functions delegated by Powys County Council.[5]

In the east and south are some comparatively level tracts, including the Vale of Radnor, but most of the county was mountainous, with the Cambrian Mountains running through the west of the county. The highest point is at Radnor Forest, 2,166 ft (660 m). The Elan Valley contains several huge man-made reservoirs supplying water to Birmingham. The main rivers are the Wye, The River Teme, the Elan and the Ithon.

The chief towns are Knighton, Llandrindod Wells, Presteigne and Rhayader. The main industries are tourism and hill farming, particularly sheep-raising.

On the creation of the county it was divided into six hundreds. The names of the hundreds, which were not always consistently spelt, were as follows:[6]

In the 19th century new structures of local administration were introduced. The Poor Law Amendment Act 1834 grouped parishes into poor law unions. While these were not themselves local authorities, their boundaries were to later be used to define local government districts. PLUs did not conform to county boundaries, but consisted of catchment areas for workhouses. Most of Radnorshire was included in the three unions of Knighton, Presteigne and Rhayader.[7] Parishes on the edges of the county were included in unions based in other counties: Builth and Hay on Wye in Brecknockshire and Kington in Herefordshire.

There were no town councils in the county until 1850, when a local board was formed at Knighton.[8] Similar bodies were later formed at Llandrindod Wells (originally named Trefonen) and Presteigne in 1891.[9][10]

Until 1954 Radnorshire County Council used a version of the arms of the Mortimers, Earls of March: Barry of six or and azure on a chief of the last two pallets azure between as may gyrons of the first.[12][13] The council received a grant of armorial bearings by the College of Arms in 1954.[14] The arms were made up of charges from local families. A gold reguardant lion on red was for Elystan Glodrhydd, Prince of Wales c.1000; black boars' heads on white for his son Cadwgan. Around these was placed a gold and blue compony bordure based on the Mortimer arms. The motto adopted by the county council was (Welsh: Ewch yn Uwch) (Go Higher). In 1974 the arms were transferred to Radnor District Council.[15] In 1996 the arms were transferred a second time to Powys County Council, for use by the Radnorshire Shire Committee.[16]

The geographic territory of the historic county roughly corresponds with the Welsh territory of Rhwng Gwy a Hafren which fell under the control of the Marcher Lords at the end of the 11th Century. Radnorshire was a poor county and has been an historical backwater but occasionally has drifted to the forefront of history. The most notable historic events are the founding of Cwmhir Abbey and the Battle of Bryn Glas, fought on 22 June 1402 during the rebellion of Owain Glyndŵr.

The county's poverty was remarked upon thus in the 17th century by an anonymous visitor:

Apart from a handful of parishes along the English border the Welsh language remained the first language of the county well into the second half of the eighteenth century.[17] By 1850 the language had retreated to the western parishes of Rhayader, Llanyre, Cwmdauddwr, St Harmon and Nantmel.[6] By 1900 Welsh was still spoken by a sizeable minority west of the town of Rhayader, the language disappearing as the century progressed. Of course there were Welsh speakers living in Radnorshire who had come from other parts of Wales and today their number has been swelled by children being educated through the medium of Welsh in school.

Until the Acts of Union, Radnor was outside the Principality of Wales. This peculiar Marcher status and its want of Welsh speakers gave weight to the traditional local expression, "Neither Wales nor England, just Radnorsheer"[18] 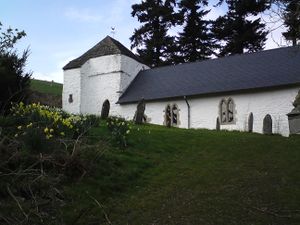 No centre in Radnorshire exceeds a population of 6,000; only one (Llandrindod Wells) exceeds 5,000:

Poverty and agricultural change, decline and industrial progress elsewhere has always made Radnorshire a place of net emigration. Emigrants employed the name of the county in the USA

Others may have formed part of the Welsh community in Patagonia.[citation needed]

Most common surnames in Radnorshire at the time of the United Kingdom Census of 1881,[20] by order of incidence:

The leading texts on Radnorshire history are: