A Recorder is a judicial officer in England and Wales and some other common law jurisdictions.

In England and Wales, originally a recorder was a certain barrister or judge having criminal and civil jurisdiction within the corporation of a city or borough. Such incorporated bodies were given the right by the Crown to appoint a recorder. He was a person with legal knowledge appointed by the mayor and aldermen of the corporation to 'record' the proceedings of their courts and the customs of the borough or city. Such recordings were regarded as the highest evidence of fact.[1] Typically, the appointment would be given to a senior and distinguished practitioner at the Bar, and it was, therefore, usually executed part-time only, by a person whose usual practice was as a barrister. It carried a great deal of prestige and power of patronage. The recorder of a borough was often entrusted by the mayor and corporation to nominate its Members of Parliament, as was the case with the Recorder of Barnstaple, who in 1545 nominated the two MP's to represent the Borough of Barnstaple.[2] The only survival today of the historic office is the Recorder of London who is still appointed by the Court of Aldermen of the Corporation of the City of London and thereby becomes a member of that court. He is a senior Circuit Judge sitting at the Central Criminal Court (the Old Bailey).

In the modern era in England and Wales, a recorder refers to two quite different appointments. The ancient Recorderships of England and Wales now form part of a system of Honorary Recorderships which are filled by the most senior full-time circuit judges. A modern system of statutory Recorders, on the other hand, has since 1971 appointed barristers and solicitors to part-time positions as judges, who sit for 3–6 weeks a year with the powers of Circuit Judges.

Where the position of borough Recorder is sought to be made by local councils, the procedure to be followed is that laid down by the Lord Chief Justice in his "Guidelines for the Appointment of Honorary Recorders", which states that it has been the practice of most large City Councils to appoint the Resident Judge to be Honorary Recorder of the city during his tenure of the office.

The appointment of an Honorary Recorder is made by the borough council concerned, and although it does not require the approval of a higher authority, the Lord Chief Justice has let it be known that he would be pleased if boroughs considering making such an appointment would first consult the Senior Presiding Judge for England and Wales.

Since the Courts Act of 1971, the system has been regulated by statute and some new positions have been created, for example for the Borough of Redbridge.[4] Honorary Recorderships are now held usually by full-time judges as a recognition of seniority. To distinguish them from the modern system of part-time Recorderships set up in 1971 (see below), historic and full-time Recorders are now usually designated "Honorary Recorders" but are usually styled "The Recorder of Anytown" (i.e. the name of the city or borough concerned). Slightly confusingly, due to the reorganisation of court buildings and the districts and circuits which have been relocated into them, especially where local government reorganisation has occurred at the same time, such titles although bestowed by one Council may be held by the Senior Resident Judge sitting in another borough; a prominent example is the Recorder of the City of Westminster who presides at the Crown Court situated in the Borough of Southwark.

In the Courts of England and Wales, a Recorder is a barrister or solicitor. Recorders were originally required to be of at least 10 years' standing, though that requirement has been reduced in recent years to 7 years' standing. Recorders are appointed by the Queen on the advice of the Lord Chancellor to hold part-time judicial office. A Recorder acting as such has all the powers of a Circuit Judge and may sit in the Crown Court or in the County Court. If appointed to do so under section 9(1) of the Supreme Court Act 1981, a Recorder may sit as a part-time High Court Judge. Recorders sitting in the Crown Court or County Court are addressed as "Your Honour".

A Recorder is paid a daily fee and is expected to sit as a judge for between 3 and 6 weeks a year.

With the major changes in both local government and the courts services through implementation of the Courts Act 1971 and the establishment of the Crown Court for England and Wales, the councils of boroughs have had the power to appoint a Circuit Judge or a Recorder of the Crown Court as Honorary Recorder of the borough concerned. The Crown Court is a single court sitting at numerous locations throughout England and Wales. At each Crown Court centre, a particular judge is appointed "Resident Judge", leads the team of judges who sit there and provides the essential link between the judiciary and the administration

In the late twentieth century, the role has become either: 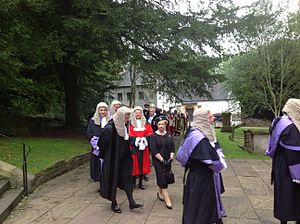 This variety of Recorder should not be confused with those Recorders who are solicitors and barristers who are appointed as fee-paid part-time judges.

The Recorder of Dublin was the principal magistrate for the city of Dublin until the office was abolished in 1924. The office of Recorder of Belfast still exists. There were also Recorders of Cork, Galway and Londonderry.

Hong Kong operates a system of appointing part-time recorders similar to that in England & Wales except that recorders are appointed to the High Court of Hong Kong and have the same powers as a full judge when sitting. The qualification for appointment is the same as that for High Court Judge: that is, having practiced as a barrister or solicitor in a common law jurisdiction for more than 10 years.[6] At anyone time, approximately eight to nine Senior Counsel hold the position of recorder. No junior barrister or solicitor has even been appointed a recorder. Additionally, a number of retired judges and Senior Counsel sit as deputy judges of the High Court for periods of one to three months a year.

In historic times, the recorder was the chancellor or vizier of the kingdom. He brought all weighty matters under the notice of the king, such as complaints, petitions, and wishes of subjects or foreigners. He also drew up papers for the king's guidance, and prepared drafts of the royal will for the scribes. All treaties came under his oversight; and he had the care of the national archives or records, to which, as royal historiographer, he added the current annals of the kingdom.[7]

This is a list of the current Titular and Honorary Recorders, together with the Crown Court venue at which they sit.